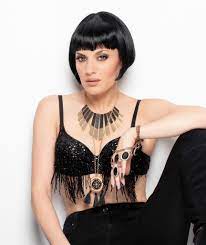 It has been a constant journey of musical prowess for the glamorous Californian-born star Ariana Savalas. With one flawless project following the next, the latest bewitching addition supervenes as a dazzling new single, ‘What Do You Wanna Know’, which is scheduled for release on the 17th of June 2022. An operatic showstopper that opens up as an honest reflection of being unsure where life is going, not having everything worked out but that it is okay.

Graced by stunning melismatic vocal melodies, intertwining a feathering velvety tone with roaring rasping power. With its classic rock ballad flair, driving the choruses forward, ‘What Do You Wanna Know’ effortlessly embraces tropes of classic alt-pop. Projected from a real place of sentiment, there is a moving essence of vulnerability that comes along with the lyrics and vocal delivery. The narrator is chained to past memories of hurt, becoming a cage stopping her from flying out and finding her true meaning in life. “How I’m 34, still searching for the meaning | Friends are moving on I’m stuck in stone” “Still I’m terrified | these wings are too broken to fly”

Ariana Savalas is an artist that can do it all, singer, songwriter, multi-instrumentalist and dancer. Now, after two years since the release of her debut studio album ‘The Dead Dance’, Savalas has her latest studio album in the works. ‘What Do You Wanna Know’ will be the first single to be released off of Savalas’ latest upcoming album ‘Renaissance’.

Paying homage to some of Savalas’ alt-pop idols from the likes of Robbie Williams, Annie Lennox, Queen, and Bowie, whilst fusing her own iconic burlesque style into the mix. Longtime friend and legendary producer Steve Power (Robbie Williams, Kylie Minogue) was called upon to offer his assistance with the production of the single. With Power helping to encapsulate and bring life to Savalas’ ingenious artistic visionary.

Ariana has become a household name throughout the industry. Notably as one of the founding members of the swing and jazz sensation that is Postmodern Jukebox. Featuring on some of the channel’s most illustrious covers, including the ‘20s style of Lady Gaga’s Bad Romance, accumulating over 40 million views alone. A name that has been up there, dazzling in the lights even before she was around, with her father, Telly Savalas. Telly had a monumental career, acting some of the biggest shows and films as well as gaining a #1 spot on the UK’s Top of the Pops. Now, making her own name for herself, selling out shows all around the globe, Ariana has become royalty within the music and burlesque world.