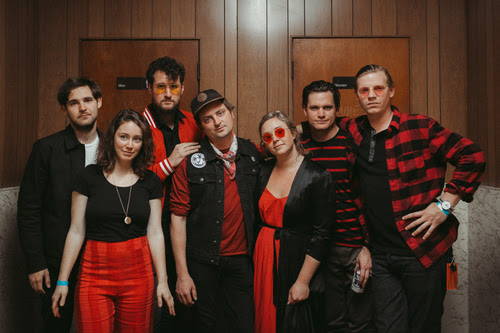 Today, Austin, TX’s Wild Child are excited to announce their first run of tour dates in 2019, making stops in Denver, Seattle, Portland, Los Angeles and many more. This follows a winter tour this November & December which will hit New York, Philadelphia and more. Find a full list of tour dates below and via the band’s website.

In anticipation of the upcoming fall tour, the band released a one-of-a-kind video for the song “My Town” from their new album Expectations out now on Dualtone Records. Director Aaron Brown achieved a truly unique miniature effect by utilizing two drones: one with a massive spotlight attached to it and the other with a camera. The result is a chilling, “Westworld”-like environment that climaxes with a burning building.

“At the end of last year, we got a small crew of people together to go spend some time out in Teralingua, TX, just shy of the Mexican boarder. It’s surreal out there, beautiful and desolate; West Texas in a nutshell,” explains co-frontman Alexander Beggins. “Our director Aaron Brown has a little ranch house out there that we camped out in for a few days but spent most of our time exploring the desert land and were fortunate enough to be allowed to film into some of the towns best kept little secret spots. The entire video really captures a moment in time in our lives”

“This song is one of my favorites from the album. It was very emotional to write and hear come to life in the studio, and it feels even more powerful with the backdrop of the Texas desert behind it,” said co-frontwoman Kelsey Wilson. “‘My Town was’ written from a very dark and isolated place and singing it in a ghost town in West Texas felt hauntingly appropriate. We all had a lot of powerful moments out there together.”

For Expectations, the band traveled far and wide in order to work with multiple producers (and accomplished musicians in their own right) on the album, including Chris Walla (formerly Death Cab For Cutie), Chris Boosahda (Shakey Graves), Scott McMicken (Dr. Dog), Max Frost and Adrian Quesada (Brownout, Black Pumas). The album has been warmly received by fans and has seen Wild Child achieve their strongest radio play yet, with lead single “Think It Over” reaching #15 on AAA. The band’s best selling record to date has also lead to 1.8 million monthly listeners on Spotify, and over 75 Million aggregate streams and counting on the service for their entire catalog.

The album has been embraced by Billboard, Consequence of Sound, Paste Magazine, and The Austin Chronicle, who said, “Without sacrificing Wild Child’s signature pop swell, Expectations emerges soulful and serious.” Over the summer, the band taped a performance for Austin City Limits‘ 44th season, which features performances from John Prine, Kacey Musgraves, St. Vincent, and Anderson East. The performance is slated to air in 2019.