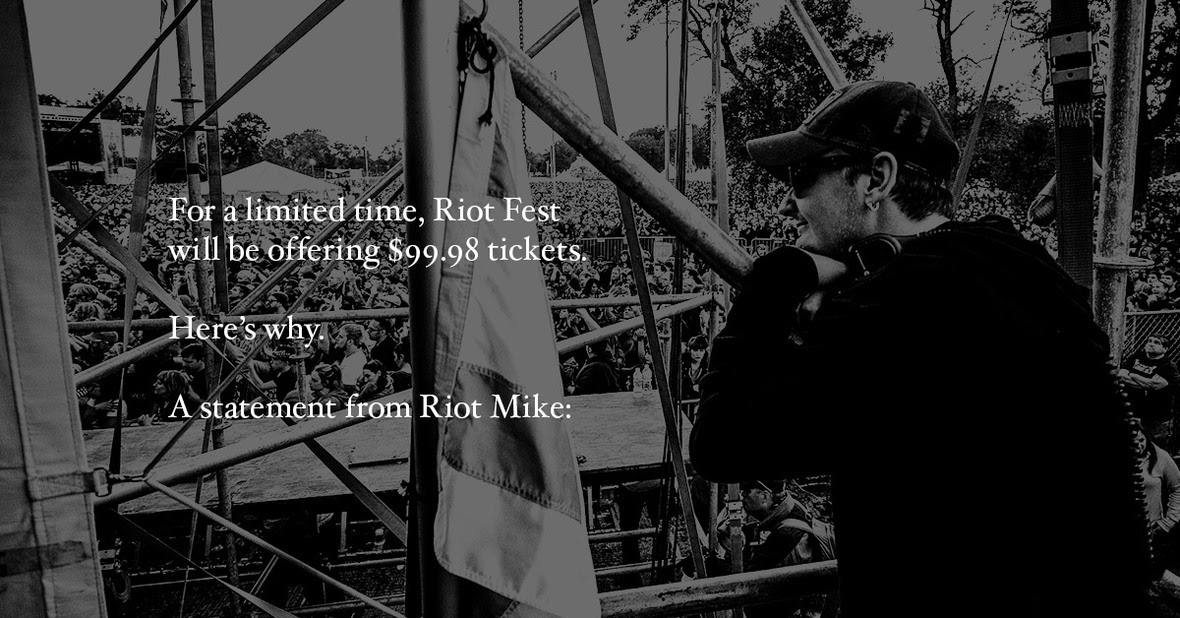 Riot Fest and its fans were impacted by the recent hacking of Ticketfly. Since then, the two companies have been working towards a resolution for the fans. One was devised last week, and Riot Fest founder Michael Petryshyn (“Riot Mike”) has a plan to share with you.

To our Riot Fam,

On May 30, 2018, Ticketfly—our ticketing partner for the last eight years—was compromised. As many of you already know, Ticketfly’s server was attacked by a hacker, causing its website to go offline for an extended period of time. Unfortunately, this occurred during Riot Fest’s 2018 lineup announcement and ticket on-sale.

While Ticketfly was making quick work of securing its website and user data, we were able to migrate over to its parent company, Eventbrite, and mitigate the effect this had on you as best we could. And since the hack, we’ve been in constant, ongoing discussions with both entities to find a resolution on behalf of those who are most important to me and all of us here at Riot Fest: you. Know that I have never taken your trust for granted. In the end, I wholly recognize that you are the ones who built Riot… not me.

So, last week we reached a settlement with Ticketfly. For me, there was only one proper thing to do: find a way to give it all back to you. Granted, there were people chirping in my ear to just keep the settlement and go about our business as usual—but they should know us better by now. If it was only about the bottom line, Riot would have been sold to some apathetic conglomerate years ago. But it’s not about that. Not one bit. Riot has been and will continue to be the festival that’s simply… different. Just like you, we take pride in living left-of-the-dial.

Having said that, thanks to the settlement, we’re very happy to be able to share a few special offerings with you today:
For those who’ve yet to purchase Riot Fest 2018 tickets, we’re going old school by releasing a limited number of three-day passes at $99.98. They’re available now viaTicketfly and Eventbrite.

For our fans who’ve already purchased tickets for this year’s Riot Fest, we’re offering you an additional single-day GA pass that you can use to bring a friend, family member and so forth for any day of your choosing. Your allotment will be based on how many tickets you’ve already purchased. Additionally, for Riot Fest 2019—our 15th anniversary—you’ll have the option to purchase a three-day pass for $99.98. This price will only be offered to you and no one else. You’ll receive an e-mail later this morning with instructions on how to claim your free ticket(s), along with a private link to purchase your $99.98 tickets for next year.

Moving forward from this, we can go about announcing all of the stuff you’ve been patiently waiting for. That all starts this Thursday when we announce the 2018 Full Album Plays and will continue into the weeks to come as we unveil the final wave of artists, the daily lineups and schedules, the Late Nightclub show series and more.

Again, without all of you, there is no Riot Fest. Its soul was not created by the reunions, the Ferris wheel, nor the people who work on it year-round. It was created by you; and for that reason alone, I cannot wait to see you all in September.