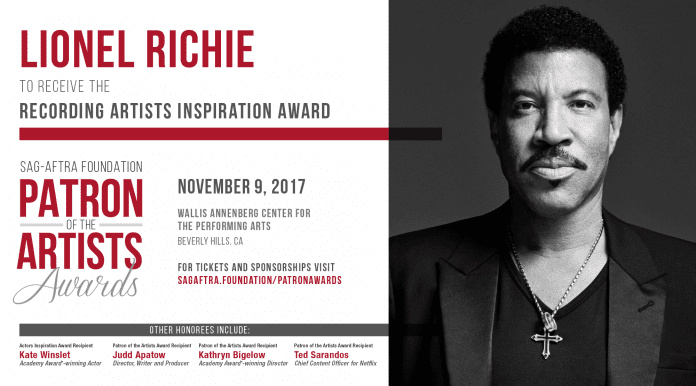 LOS ANGELES (October 5, 2017) — The SAG-AFTRA Foundation announced today Lionel Richie will be the first recipient of its inaugural Recording Artists Inspiration Award. The internationally-renowned singer-songwriter, record producer, and philanthropist is being recognized for his career achievements and charitable work. The event takes place Thursday, November 9, at the Wallis Annenberg Center for the Performing Arts in Beverly Hills.

For decades, Lionel Richie has been an influential and well-respected recording artist, selling over 100 million records. Richie has garnered multiple awards including four Grammy Awards®, an Academy Award, a Golden Globe Award®, and the esteemed Johnny Mercer Award at the Songwriters Hall of Fame 47th Annual Induction and Awards Dinner. Richie recently joined the judges’ panel for the 2017/2018 season of American Idol.

The SAG-AFTRA Foundation’s Recording Artists Inspiration Award also recognizes Richie’s commitment to charity through his work with the Breast Cancer Research Foundation, Muhammad Ali Parkinson Center, UNICEF, and The Art of Elysium. Richie was presented with a “Lifetime Achievement Award” by the United Negro College Fund and he was also a recipient of the Peter J. Gomes Humanitarian Award from Harvard University.

Foundation President JoBeth Williams praised its newest honoree, “Lionel Richie is an American institution. We all know his beautiful music for which he’s been greatly honoured, but even more than a legendary recording artist, Lionel is a man of tremendous compassion who’s deeply committed to helping others. We’re proud to recognize his invaluable charitable work.”

About Lionel Richie
International superstar Lionel Richie has a discography of albums and singles that are second to none. His music is part of the fabric of pop music; in fact, Richie is one of only two songwriters in history to achieve the honour of having #1 records for nine consecutive years. With more than 100 million albums sold worldwide, an Oscar®, a Golden Globe®, four Grammy Awards®, the distinction of MusicCares person of the year in 2016, and Kennedy Center Honoree in 2017, the Tuskegee, Alabama native is a true music icon.

Lionel Richie is known for his mega-hits such as “Endless Love,” “Lady,” “Truly,” “All Night Long,” “Penny Lover,” “Stuck on You,” “Hello,” “Say You, Say Me,” “Dancing on the Ceiling,” and one of the most important pop songs in history, “We Are the World,” written with Michael Jackson for USA for Africa. His song catalogue also includes his early work with The Commodores, where he developed a groundbreaking style that defied genre categories, penning smashes such as “Three Times a Lady,” “Still,” and “Easy.”

Richie launched his Las Vegas headlining residency show, Lionel Richie—All the Hits, at The AXIS at Planet Hollywood Resort & Casino in April 2016. In an unforgettable evening featuring his brightest and best anthems which have defined the music icon’s unparalleled career, Richie takes his fans on a spectacular musical journey, performing a variety of his seminal hits.

With his most recent All the Hits, All Night Long Tour, Richie sold out arenas worldwide with a set list of his brightest and best anthems. In recent years, he also headlined festivals including Bonnaroo, Outside Lands, and Glastonbury, drawing the festival’s biggest crowd ever with more than 200,000 attendees.

About the SAG-AFTRA Foundation
Since 1985, the SAG-AFTRA Foundation has granted more than $18.5 million in financial and medical assistance including $7.5 million in scholarships to SAG-AFTRA artists and their dependents. In addition, the Foundation has offered 7,200 free educational workshops, panels and screenings to union performers nationwide and its children’s literacy programs have brought the love of reading to more than 300 million children worldwide.

In 2017, the SAG-AFTRA Foundation celebrates 32 years of giving back to the professionals of SAG-AFTRA, their families and communities. The Foundation is a 501(c)(3) non-profit organization that provides vital assistance and free educational programming to the professionals of SAG-AFTRA while serving the public at large through its signature children’s literacy programs. The Foundation relies solely on support from gifts, grants and sponsorships to maintain its free programs. Visit sagaftra.foundation.