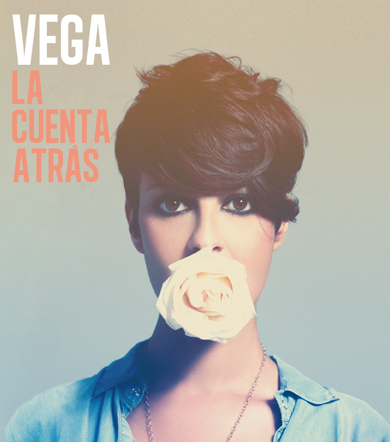 There’s a female guitar-playing singer-songwriter out of Spain whose real name is Mercedes Carpio.  She is best known by just her stage name…Vega.  Don’t confuse her with Suzanne Vega, of “Tom’s Diner” and “Luka” fame.  This Vega has a rocking album entitled “La Cuenta Atras,” which is Spanish for “The Countdown,” released back in September 2011.

When she finished her university studies with a major in advertising and public relations–attending classes during the day, then performing the bars at night when she would get a chance–Vega was selected to appear as a contestant on an “Idol”-type TV talent show in Spain entitled “Operación Triunfo” [“Operation: Triumph”] back in 2002. She didn’t make it to the championship round, but she did parlay that appearance into a successful gold-selling debut album more than a year after, entitled “India”, that garnered two chart-topping singles: the platinum-selling “Quiero Ser Tú” [“I Wanna Be Yours” roughly translated] and “Grita!” [“Shout!”].

Vega’s brand of Spanish pop-rock has drawn from such diverse influences as Frank Sinatra, the Belgian band K’s Choice, and veteran Spaniard rockers Los Planetas.  Yet she puts lots of work into her efforts by being actively involved in all aspects of her career.  Vega says that her greatest inspiration is “to live and read. To swallow up life without restrictions, fears nor caution. To talk about beauty and cruelty equally. I write songs that aspire to be the soundtrack of a moment in the lives of others, and many of the ones I have written… have already managed to do that.”

“La Cuenta Atras” is Vega’s 5th album, and was produced in Los Angeles by Argentina-born Sebastian Krys, an 8-time Latin Grammy-winning producer who has also worked with the likes of Gloria Estefan, Shakira, Ricky Martin, Black Eyed Peas and Will Smith.

Vega describes “La Cuenta Atras” as “an optimistic record,” one that she “had to make.”  Perhaps that is why “La Cuenta Atras” is also one of five albums nominated for Best Pop-Rock Album [Spanish: Mejor Disco Pop-Rock] in the Latin Grammy Awards [Los Premios Grammy Latino].  The awards will be handed out next Thursday, November 15, at the Mandalay Bay Events Center in Las Vegas.  Spanish-language US TV network Univision will be showing the Latin Grammys live starting at 8pm Eastern time.

In addition to being a musician, Vega also co-promotes one of Spain’s biggest music festivals, called “Festival de la Luz,” together with the event’s namesake, pioneering female Spaniard pop-rock singer Luz Casal.  Luz, Vega, and many other top acts from throughout Spain perform in this festival, which benefits anti-cancer causes.

You can find out more about the Latin Grammys by visiting www.latingrammy.com.  As for Vega, you can visit her website, www.vegaoficial.com, as well as like her on Facebook at www.facebook.com/vegaoficial, and follow her on Twitter @vegaoficial.  Vega’s social media sites are in Spanish, so it’s recommended that you use an online translator. Also, you can watch some of Vega’s videos on www.youtube.com/vegavevo.