“When I write songs, I try to write about what goes on in my life and something that I think can relate to others.”

“I feel like there is this false stigma that women – especially young women – can’t play guitar as well as men.”

Gender has been at war with the music business since the beginning of time, but 19-year-old blues sensation Ally Venable continues to win the battle as she hits the road this spring in support of her newest album, Puppet Show, released on April 13th via Connor Ray Music. Venable’s work has received high praise for its timeless sound and flow combined with her immutable voice for a new generation of blues fans and fellow artists. Guitar Girl Magazine chatted with Ally Venable about the record, her identity and intention, and her experience as a young female guitar player and vocalist fighting to make her story heard.

You’ve been called an old soul time and time again. How did you get your love for blues?

When I first started playing guitar, I gravitated toward the players that could sing and play, and most of those players were blues artists. The main one that stuck out for me was Stevie Ray Vaughan. Then I started looking into his influences. What’s cool about Stevie is that he introduced so many people to blues that didn’t really know about it, and I hope to do that for people now with my music. I think the reason why I love blues so much is that it’s where ALL genres derive from — rock, R&B, country, etc. They all base their sound on blues, and that’s why I can connect with it so well.

How has being from Texas shaped your musical perspective and ambitions?

Texas has surfaced many great blues guitarists like SRV, Billy Gibbons, Johnny Winter, T-Bone Walker, Lightnin’ Hopkins, and Gary Clark, Jr.– to name a few– and that “Texas Style” is certainly integrated into my guitar playing and live performances. I’ve been blessed to meet so many great players around my area, like Guitar Slingers Wes Jeans and Lance Lopez. Lance has really helped me over the years with things like technique and guidance within my career as a musician. Those guys have a big influence on my playing, though I do feel like I have my own sound and individuality with it.

Can you explain the concept behind your new album, Puppet Show? What story is being told?

The story behind Puppet Show portrays a message of taking control of your life and surpassing the struggles you face. It’s about not letting anything or anyone keep you from setting yourself up for success in whatever you do. When I write songs, I try to write about what goes on in my life and something that I think can relate to others. I want to let people know that it’s okay to feel a certain way and that we are only human. I hope this album can really connect with individuals and help them see that we all go through the same things and that we can always conquer what is put out in front of us.

Have you experienced sexism and marginalization as a young woman in the music business? How so?

There have been a few cases where I’ve come across individuals unintentionally stigmatizing my guitar playing. For example, I have had many people tell me this exact quote, “You play really good for a girl.” And there was another time when I was playing at a festival, and someone only heard my playing and didn’t see me yet. After the set was done, they came over to “compliment” me on my playing by saying, “I thought you were a 40-year-old man playing.” I feel like there is this false stigma that women – especially young women – can’t play guitar as well as men. I know these people don’t mean anything by it, and it really doesn’t bother me. It’s just one of those things. There are a lot of great female guitar players out there, like Bonnie Raitt, Ana Popovic, Susan Tedeschi, Samantha Fish, Orianthi, and so many more!

Who have been some strong female figures present throughout your life?

My mom has been a strong female figure in my life throughout my upbringing and supported me with my musical endeavors.

Do you ever feel that gender and age prove to make work difficult?

I feel like it’s sometimes challenging to be taken seriously as a musician for my work because I am so young and a female, especially in pursuing this genre, but I love what I do, and when I hit the stage and feel the love from my fans it makes it all worth it.

What are some experiences you’ve had touring previously?

You drive and set up more than you play, but my two bandmates, Bobby and Elijah, like to crack jokes and make fun of me while we are on the road to break down the monotony. Ha-ha. They aren’t just my bandmates; they are like my brothers. I’ve also learned that it’s always good to have something and not need it than to need it and not have it like a spare tire.

You’ve won several awards for “Best Female Guitarist.” Do you feel that the word “female” is necessary for titles pertaining to music and creativity?

Absolutely not, and it goes back to that stigma of women not being seen as equal to men when it comes to playing the guitar. The award thing is great, but I really don’t like the competition aspect of it because music is subjective, and as long as my fans keep coming and packing the house, I’ll keep playing for them. It’s nice to be recognized for your talent and hard work, but I just would like to be known as a great blues-rock player and songwriter.

My current live setup consists of my Category 5 –Andrew Model amp – Head & 1 12 Speaker Cab. I love using pedals, so I push them through the clean channel of the amp. Right now, I am using the Lex Rotary Pedal by Strymon to emulate a Leslie speaker, Carbon Copy Delay, Dynamic Distortion by Vertex, and Dunlop 535Q-B Cry Baby Multi-Wah. The guitars I am using right now are my Fender Stratocaster Deluxe- I also work with a company called Fishman, and I have Fishman Fluence pickups in that guitar. I also have a Gibson Les Paul. In the ‘90s, they did this “Limited Colors Edition,” and I have the magenta-colored one. I love that guitar. I also play my Telecaster when I play my slide stuff. I am using Ernie Ball Strings, usually 10’s….11’s on my Tele.

What do you hope to see more of from other young women in music?

Building each other up to reach a broader audience at shows and encouraging one another to be successful in this business. You can do anything you set your mind to, and encouragement and reassurance from other girls – especially female musicians – can help.

Building Guitars and Community: Getting to Know the Women Behind the Scenes at PRS 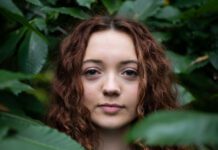