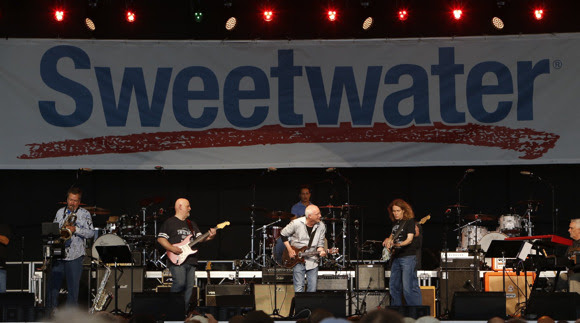 Fort Wayne, IN — For the 17th year, Sweetwater hosted its annual GearFest on Friday, June 22 and Saturday, June 23, 2018, at its campus in Fort Wayne, Indiana, drawing record crowds with more than 15,000 attendees from across the world — including guests from Australia, Brazil, and Japan. This year’s event also saw a 15-percent increase in music equipment sales during the event.

Considered the nation’s largest customer-focused music and pro-audio trade show, GearFest 2018 offered something for every music lover — from over 200 workshops to new gear releases from top musical instrument manufacturers to performances by some of the biggest names in the industry, including Greg Koch, Peter Erskine and John Scofield.

“We are thrilled that GearFest continues to attract more and more musicians from across not only the U.S. but the world, who are searching for a unique music experience unlike any other,” said Steve Dwyer, Senior Director of Brand at Sweetwater Sound. “Through GearFest, Sweetwater is reaching today’s music creation community and bringing them the opportunity to learn and interface with some of the brightest minds in the music industry. We are certain that anyone who attended GearFest walked away with a new piece of knowledge and are ready to take their passion for music to the next level.”

For those who couldn’t make the event, Sweetwater live streamed select panels, performances, and workshops on Facebook Live so everyone could be a part of the GearFest experience. The live-streamed videos can be viewed at https://www.sweetwater.com/gearfest/watch-live/.

Unforgettable Performances
Inspiring the crowd, this year’s GearFest was full of memorable, impromptu performances by some of the biggest names in the music industry, including guitarist Nita Strauss who took the stage during her seminar with Nick Bowcott and performed an impromptu performance of Pantera’s “Walk” as a tribute to the late Pantera/Damageplan drummer Vinnie Paul.

Another unforgettable performance came when drummer Steve Ferrone, who has worked with top talent like Tom Petty, Eric Clapton, and Duran Duran, learned that his former bandmate — keyboardist, arranger, and music director Greg Phillinganes — was also at GearFest. The two legends connected and jumped onstage, entertaining the audience with a spontaneous rendition of Clapton’s “Pretending.”

Serious ‘Master’ Classes
Performances aside, GearFest also offered attendees the opportunity to learn from some of the best and brightest in the industry during expert panels and workshops which featured names like Periphery guitarist Misha Mansoor, drummer and producer Russ Kunkel, and former Megadeth guitarist Chris Broderick. The more than 200 workshops and seminars covered such topics as getting discovered on YouTube, music creation with computers, and tips on improving technique and theory.

A perennial GearFest favorite, this year’s Producer’s Panel offered a high-powered discussion on what it takes to be a producer, how to help artists perform their best and what makes a song great. The panel was made up of Sylvia Massy (Tool, Prince), Neal Pogue (TLC, Pink), Kevin Killen (Shakira, U2), Fab Dupont (Jennifer Lopez, Bon Jovi), Chris Lord-Alge (James Brown, Prince) and Rich Chycki (Dream Theater) along with Sweetwater’s own Mitch Gallagher moderating the panel.