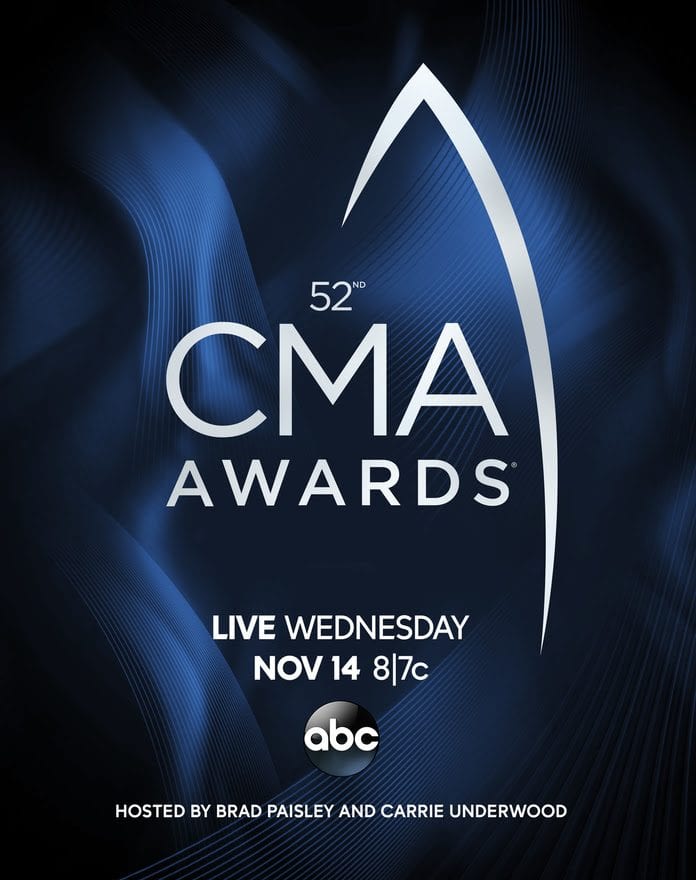 “Today kicks off CMA Awards season where we get to honor the best of the best in our outstanding format,” said CMA Chief Executive Officer Sarah Trahern. “There were some great breakout performances this year and the diversity of the nominations honors new faces and some favorite returning names.”

Brad Paisley and Carrie Underwood return for an 11th year to host “The 52nd Annual CMA Awards,” Country Music’s Biggest Night™, broadcasting live from Bridgestone Arena in Nashville Wednesday, Nov. 14 at 8/7c on the ABC Television Network. Media and publicist credential applications for “The 52nd Annual CMA Awards” are located at CMAPress.com. The deadline to apply is Friday, September 28 at 5:00 PM/CT.

Stapleton leads this year’s CMA Awards nominations with five, adding to his previous 11 nominations and seven wins. He lands his third consecutive nod for Entertainer of the Year in addition to nominations in the Single and Song of the Year categories for “Broken Halos,” produced by Dave Cobb and Stapleton, mixed by Vance Powell, and written by Mike Henderson and Stapleton. Stapleton earns his third nomination for Album of the Year for From A Room: Volume 2, produced by Cobb and Stapleton. He previously won Album for his first two solo albums, Traveller, awarded in 2015, and From A Room: Volume 1, awarded in 2017. Stapleton also receives his fourth consecutive nomination for Male Vocalist of the Year, a category he remains undefeated in, having won the past three years.

Producer and musician Dann Huff garners the second most nominations, receiving four nominations for his behind-the-scenes work with multiple artists. Huff is a 31-time nominee with three previous wins for Musician of the Year and two previous wins for Single of the Year. This year, he’s once again nominated in both of these categories. His Single nomination for producing Midland’s “Drinkin’ Problem” earns Huff his sixth nomination in the category. He also lands two Album of the Year nods for his production work on Keith Urban’s Graffiti U and Thomas Rhett’s Life Changes. Huff earns his 18th nomination in the Musician of the Year category, which he last won in 2016.

Dierks Bentley earns his sixth career nomination for Album of the Year, alongside producers Ross Copperman, Jon Randall Stewart, and Arturo Buenahora Jr., while also marking his fifth consecutive nomination for Male Vocalist of the Year. He also lands a nod alongside Brothers Osborne for Musical Event of the Year for their collaboration “Burning Man,” Bentley’s third nomination in the category. He won Musical Event in 2016 for his song “Different For Girls” (Feat. Elle King). With this year’s nominations, Bentley collects 24 total career nominations.

With three nominations this year, Chris Janson ties Midland for the top-earning first-time nominee. His song “Drunk Girl” lands nods for Song of the Year, alongside co-writers Scooter Carusoe and Tom Douglas, and Music Video of the Year, directed by Jeff Venable. Janson is also up for New Artist of the Year.

Not only is Miranda Lambert the most-awarded female in CMA Awards history with 13 total wins, but she’s also the reigning Female Vocalist of the Year, earning her 12th consecutive nomination in the category this year. Lambert collects two nominations with her Jason Aldean collaboration “Drowns the Whiskey” for Single of the Year, along with producer Michael Knox and mix engineer Jeff Braun, as well as for Musical Event of the Year, bringing her total career nominations to 47.

MIDLAND – THREE NOMINATIONS
Single of the Year (“Drinkin’ Problem”), Vocal Group of the Year, New Artist of the Year

Midland ties for the top-earning first-time nominees, matching Chris Janson’s three nominations this year. The trio lands a Single of the Year nomination for “Drinkin’ Problem” along with producers Huff, Shane McAnally, and Josh Osborne, and mix engineer Justin Niebank. Midland also receives nominations for Vocal Group of the Year and New Artist of the Year.

Thomas Rhett collects his second consecutive nomination in the Male Vocalist of the Year category this year. His album Life Changes earns his first-ever Album of the Year nomination, which he shares with producers Julian Bunetta, Jesse Frasure, Huff, and Joe London. Thomas Rhett also receives a nomination for Music Video of the Year for his song “Marry Me,” directed by TK McKamy.

KEITH URBAN – THREE NOMINATIONS
Entertainer of the Year, Album of the Year (Graffiti U), Male Vocalist of the Year

Winners of “The 52nd Annual CMA Awards” will be determined in a final round of voting by eligible voting CMA members. The third and final ballot will be emailed to CMA members Monday, Oct. 1. Voting for the CMA Awards final ballot ends Tuesday, Oct. 23 (6:00 PM/CT). All balloting is tabulated by the professional services firm Deloitte & Touche LLP.

“The 52nd Annual CMA Awards” is a production of the Country Music Association. Robert Deaton is the Executive Producer, Gary Halvorson is the Director, and David Wild is the Head Writer.

**SUGGESTED TWEET**: #CMAawards NOMINEES JUST ANNOUNCED! @ChrisStapleton tops the list of finalists with five nominations. See the full list of nominees on CMAawards.com now. Winners will be revealed live on Wed, Nov. 14 at 8|7c on @ABCNetwork

SINGLE OF THE YEAR
(Award goes to Artist, Producer(s), and Mix Engineer(s))

ALBUM OF THE YEAR
(Award goes to Artist and Producer(s))

SONG OF THE YEAR
(Award goes to Songwriter(s))

MUSICAL EVENT OF THE YEAR
(Award goes to each Artist)

“THE 52ND ANNUAL CMA AWARDS” – FINAL NOMINEES FOR BROADCAST PERSONALITY OF THE YEAR (by market size):

“THE 52ND ANNUAL CMA AWARDS” – FINAL NOMINEES FOR RADIO STATION OF THE YEAR (by market size):