Home News THE ULTIMATE GUIDE TO VINYL AND MORE: ALL YOU NEED TO KNOW... 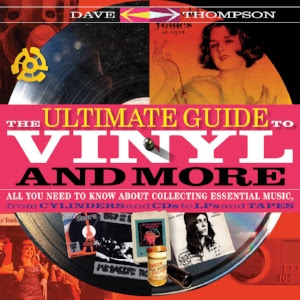 While contemplating future acquisitions, audiophiles among us need look no further than Dave Thompson’s THE ULTIMATE GUIDE TO VINYL AND MORE: ALL YOU NEED TO KNOW ABOUT COLLECTING ESSENTIAL MUSIC, FROM CYLINDERS AND CDS TO LPS AND TAPES (Backbeat Books; September 25, 2018; $29.99) for an unrivaled overview of collectible music.

THE ULTIMATE GUIDE TO VINYL AND MORE is divided into four sections. The first, “Collecting and Collectors,” explores both the history of the hobby and best practices for expanding your holdings; the second, “Collections and Collectibles,” examines the array of formats on which music has been delivered over the years, from the early days of cylinders, 78s, and Edison records on through 45s, LPs, 8-tracks, cassettes, bootlegs, CDs, MiniDiscs, MP3s, LPs, and beyond; the third, “The Eye of the Beholder,” explores sample themes by which you might curate a collection; and the last, “Thirty Collectible Record Labels,” presents an alphabetical directory of (guess how many?) thirty of the most collectible American, British, and European record companies, delving into their histories and pinpointing sought-after artists and releases.

Through it all, the joy and fascination of music collecting in all its guises comes alive. Indeed, Backbeat is so confident in the book as to reveal the one hard and fast rule of music collecting now: “If a record you own is going to go through the roof, it will only do so after you’ve sold it. Usually for a dollar.”