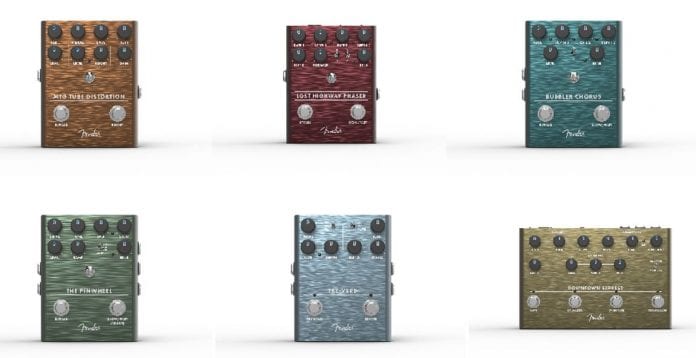 Fender released a series of very cool effect pedals at Winter NAMM 2019 to add to its current collection. Before we take a brief overview of these six new pedals, I’d like to talk about some of the universal features of this new line.

The pedals that have sound modulation have a knob called the Sensitivity knob.  I find this to be a very cool feature as you can change the parameters of the effect depending on how hard or soft you are playing. All the pedals are made from a very durable and lightweight anodized aluminum, and they all include LED illuminated controls that feature an on and off switch. All of these pedals are powered by either a 9-volt battery or a DC power adapter. 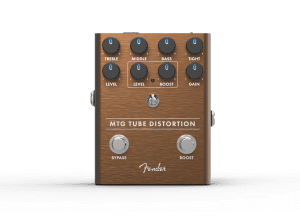 The MTG Tube Distortion was one of the most interesting ones for me. I love tube amps, and when you can incorporate some of those features into a pedal, I’m all for it. There is a little backstory to the design of this particular pedal. Fender had acquired a warehouse of new, old, miniature tubes. They thought it would be a really great idea to ask Bruce Egnater, who is very well known in the tube amp world, to design this pedal, and he agreed. With a 3-band EQ, gain control, tight control, and two footswitches for Bypass and Boost, there are a lot of ways to dial in the right sound for you. I really liked the ability to roll off the volume of my guitar a little and still achieve such a great tone associated with tube amps. This pedal is very versatile for rhythm tones, and you can kick down the boost to create some great lead tones as well. This pedal is priced at $199.99 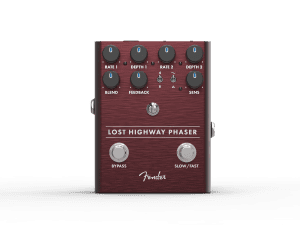 The Lost Highway Phaser pedal is Fender’s take on the Classic Phaser effect with some modern controls that allow you to expand on what you thought a phaser pedal was capable of.  It has two different Rate and Depth knobs to really create some effect with depth and speed. It has a Blend knob that lets you create a mixture of dry to full phase and anywhere in between. Some of the more advanced features like Feedback, Blend, as well as a Fast/Slow setting, let you dial in the right tone for your artistic needs. There is a switch that allows you to toggle from Sine to Triangle waveforms, which can make for some interesting effects. This pedal also features a switch on the back from a 3db boost to compensate for the loss of volume when blending in your dry tone. The Lost Highway Phaser also features the Sensitivity knob that creates changes in your effect depending on how hard or soft you are playing on the strings. This pedal is priced at $149.99 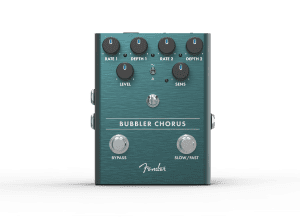 Fender’s retention of this analog classic is the new Bubbler Chorus pedal. This effect has been used in many famous compositions and with the mixture that Fender has created by maintaining the original features with some advanced features, allows for the player to develop a greater palette of sounds.  Separate Rate and Depth controls make it is easy to dial in your sound. The pedal also features a toggle switch allowing for change to the waveform from Sine to Triangle. With stereo outputs for a true chorus connection, you can run the signal to two separate amps for the full chorus effect. This pedal also features the Sensitivity knob that will give the effect a slightly different feature based on how hard or soft you pick. This pedal is priced at $149.99 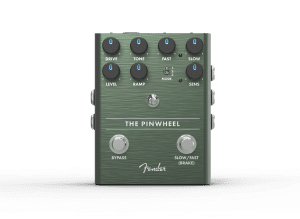 The Pinwheel is Fender’s new rotary speaker emulator.  With the growing popularity of this effect in modern music, it is no wonder Fender has added this gem to its new arsenal. With seven knobs (Drive, Tone, Fast, Slow, Level, Ramp, and Sensitivity), one 3-way toggle, and two footswitch buttons allow for creating the ideal tone for your music. The 3-way toggle offers three different speaker voicings, including Fender’s own Vibratone that allow for a wide variety of color. The pedal is equipped with stereo inputs and outputs which will allow for use with any guitar or keyboard rig. One of my favorite features was the ability to add a little gain to the sound, getting a lot of the classic rotary speaker sounds we have heard in music over the years. This pedal is priced at $269.99 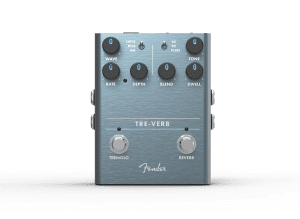 Fender is known for its classic Tremolo and Reverb sounds, and that fact that you can get both of these effects in one pedal is excellent. With independent features for both of these sounds, you can be really detailed when dialing in these tones individually. With a switch that allows you to select from a ‘63 and ‘65 spring reverb and plate reverb, you can capture these classic Fender tones at a flip of the switch. There are also three classic tremolo sounds to choose from (Optical, Bias, and Harmonic Vibrato). With three knobs for each effect — Level, Rate and Depth for the tremolo and Blend, Tone and Dwell for the reverb — it can create any kind of sound you desire. The stereo output feature also makes it easy for you to use in any stereo or mono amp set-up.  This pedal is priced at $269.99. 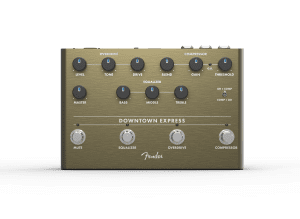 The new bass multi-effect pedal from Fender has all the essentials needed to create some massive bass tones. With a compressor, 3-band EQ, and overdrive, you can create a wide palette of tones. It also features a direct output which will be very useful in any live or studio situation. With three knobs for each of the three effects and a master knob, there is a lot of dialing in that can be done to create the perfect bass tone for any situation. One of the coolest features I found in this pedal was the switch that allows you to reorder the overdrive and the compressor in the effect chain, depending on what type of sound you are trying to achieve. This pedal is priced at $249.99. 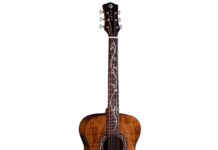