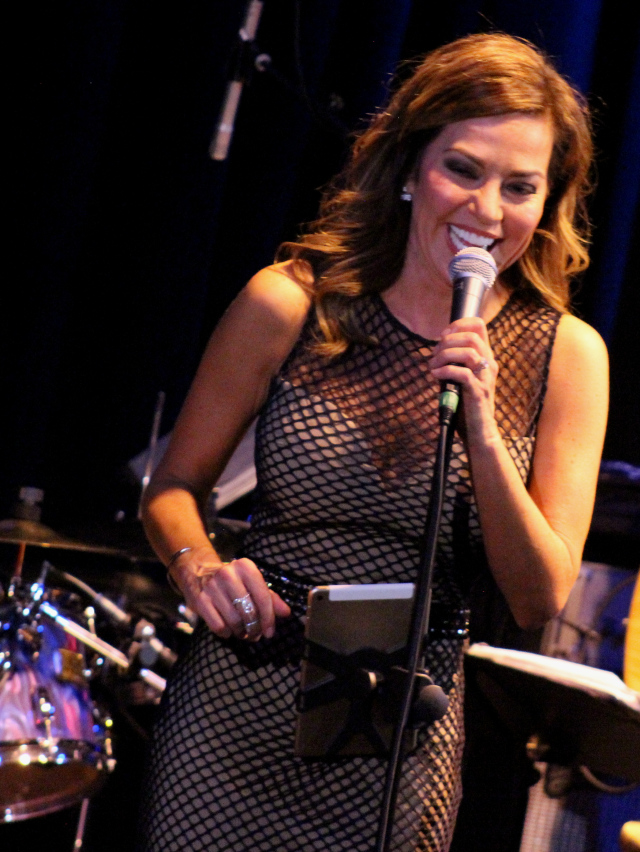 HLN morning show host, Robin Meade, played to a sold out crowd at Eddie’s Attic in Decatur, Georgia. World known as the host of “Morning Express” with Robin Meade on HLN, Meade performed a variety of music genres with friends and special guest Sixwire. The night was entertaining and one could tell that she and the band were having a great time performing. The music venue, Eddie’s Attic, is legendary in Decatur for having great performances in an intimate setting.

This show had everything from country to rock to guitar riffs to original music to southern rock to a 1970’s mix, as well as great wit and cleverness, and extremely entertaining. It was truly a variety show with a little something for everyone.

Robin Meade was wearing a beautiful black fish net illusion floor length dress over a white sheath and was absolutely adept at engaging with the audience that evening. Backing her was the band from the hit TV show “Nashville” which consists of five members and they call themselves Sixwire. Meade and the band were a hit that evening bringing holiday spirits and a good time to all. Throughout the show there were many moments of laughter from her wit and talent which had the audience clapping and cheering for more.

One of the best and most notable moments of the evening was when Robin Meade and Sixwire dedicated a song to the great, late Alex Cooley, the legendary Atlanta concert promoter for over six decades and co-owner of Eddie’s Attic, who put Atlanta on the map as a music city. The song was a Garth Brooks song “The Dance” and Robin Meade sang it beautifully. It was one of those special moments one can only experience live at a concert.

On a much lighter side of the evening was original music from Robin Meade as well as original songs from Sixwire. Meade performed “Put my high heels on” while Sixwire performed along with Robin Meade on her new Christmas song “Guess Who’s Coming to Town?” A fun and creative guessing game was played about how many ‘70s songs one can guess from a medley – a true crowd pleaser. Another crowd pleaser for the guitar enthusiast was a medley of nothing but guitar riffs from some of the greatest songs of all time.

Eddie’s Attic is a wonderful place to catch a live show with their quaint listening room accompanied with great food and drink. With music from all genres each week, there’s something for everyone to enjoy. For me, this was a great show to see—an intimate setting, a great band, and not to mention the clever, funny and entertaining Robin Meade.

Sixwire has a new Christmas album out and Robin Meade will be coming out with a new album very soon.