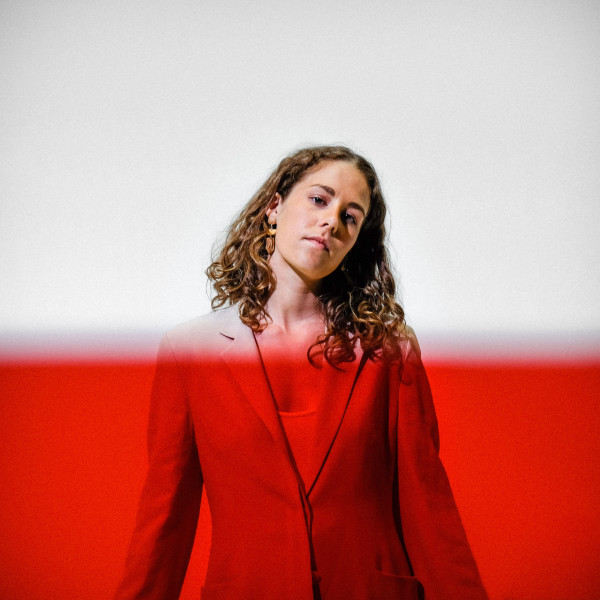 Speaking to the song, Michaela shares, “’Tarot’ was one of the first songs I ever demoed and self-produced on Garageband at home. I had just purchased a MIDI keyboard and was trying to push myself to write a song a day in April 2019. I didn’t achieve a song a day, but lots of uninhibited, curious experimentation happened, such as the low percussive hums you hear throughout the track. Those are original from me in my thin-walled apartment, messing around with layering my own vocals as samples.”

Michaela attracted beaucoup attention with the 2019 release of her single, “Flux,” produced by Nygel Asselin of Greenhouse Studios. “Flux” amassed more than 250,000 streams. Since then, she’s worked with producers in both Vancouver and Calgary, drawing comparisons to Maggie Rogers, Joni Mitchell, and Lorde.

Right now, she’s in the studio laying down tracks for her EP with producer Louise Burns, previously of Madonna’s Maverick Records.

Guitar Girl Magazine caught up with Michaela Slinger to find out more about her writing process, the inspiration for “Tarot,” and what she’s listening to at the moment.

I feel like this is a really boring answer, but in reality—probably my water bottle, my contact lenses, and some way to read and write (I know my phone is the obvious choice, but I resist saying that I couldn’t live without it!). I think my graduation ring is up there, too. I feel naked without it.

I was thinking about how we love to a) interpret all of our thoughts as meaningful and important, and b) seek guidance from things like astrology and tarot cards to help place those thoughts in a larger, more universal context.

Every song is a little different, but I would say that lyrics drive me. Sometimes I’ll have a melody idea come first, but I usually get stuck until I’ve got a message or story that I feel is worthy to tell.

What do you want people to take away from the video?

First, that my friends and video team are amazingly talented! Miranda MacDougall, Callum Gunn, and Harry Hill pulled off that video in a very short time frame. In terms of meaning to take away, I think the video shows people that it’s okay to be kind to yourself while you’re changing and that sometimes letting go can be joyful and cathartic.

I treated myself to a Simon and Patrick guitar a few months ago, after I received some money, at Long and McQuade. I had actually never heard of them before, but I got amazing advice from the staff there based on my price point. It has such a warm sound and it plays so smoothly. When I compare it to my old guitar, I can’t believe the difference. I also like that it’s made in Canada. I’ve struggled for a while to play barre chords, and while it’s an ongoing battle, I feel like this guitar makes it easier.

Great question. I haven’t had a chance to try out many different kinds of guitars, but I’ve always loved Taylor Guitars. My friend’s dad has one and we spent the weekend at his place—I think it’s a smaller size than a standard guitar—and I was obsessed with it the whole time.

I’ve been musical for as long as I can remember. My parents tell me that I was singing as soon as I could talk. I think it was evident early on that I was a performer, and I had the benefit of being the first-born child of my generation in my family, so I had a very captive audience of adults and eventually a younger sister and cousins to recruit into my shows. I was in musical theatre by the time I was four or five.

I listened to such a range of music growing up. Before even being conscious of it, I think I was drawn to women whose music made me feel powerful—that power often came from hearing relatable but poetic lyrics that I was also trying to write at home in my songwriting notebooks. My grandma would exclusively play Shania Twain’s Up! in her car as she drove my sister and me around. There was so much storytelling in her lyrics. Taylor Swift was a fixture during my middle and high school years.

I have Donna Missal’s Lighter on repeat, as well as HAIM’s latest record Women in Music Pt. III.

Do you have guilty music and/or entertainment pleasure?

I tried to pretend for a while like this wasn’t what I was meant to do. It got to the point where I felt like I was carrying a huge, heated weight inside of me as I went about my non-music business. Once I leaned into the wisdom my childhood self never wanted to hide—that I loved singing, performing, and creating—I felt free. I make music because it helps me feel the most presently alive, and like the best version of myself.

I’m planning a small, acoustic, COVID-safe tour during August. I’m enjoying my first release with 604 Records being out now, and I’m gearing up for my next single release and thinking about what it might look like to release my debut album in a world still adjusted to COVID restrictions.