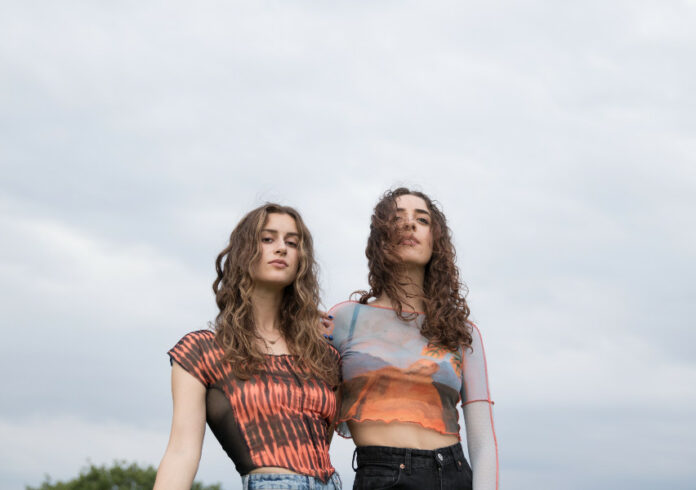 “Vampires” follows on the heels of “Shoot” and “Cause,” along with vast recognition and applause from major outlets such as Earmilk, The Line of Best Fit, Gigwise, PopMatters, and Under The Radar, as well as more than 166,000 monthly listeners on Spotify.

Made up of Tessa Mouzourakis and Wynter Bethel, the twosome’s name was borrowed from their fascination with Jane Austen, whose former lover was the infamous, original ‘fuckboy’ Thomas Lefroy.

Guitar Girl Magazine spoke with Tommy Lefroy to find out more about the inspiration for “Vampires,” their definition of tone, and their writing process.

W – Okay I’m gonna say my phone but only because my friends all live in different cities, and I am very far from family. Sunlight.

What inspired your new song, “Vampires?”

W – My roommate and I walked to the grocery on Halloween morning of 2019, in LA. He was actually nursing a cold and bought garlic. I think I bought a Reese’s. I was having a hard season and was so grateful for him that morning. He was navigating a challenging relationship at the time and was really down about himself. I recorded a voice memo in my phone later that day, literally in the walk-in fridge of my day job, “You can fall in love a thousand times, I just want for you to love your life”

I brought the idea to Tessa a couple of weeks after when she was visiting in LA, and we were writing at our friend Justin Lucas’s quaint garage studio in Venice Beach. We knew we needed to write a song for our friends, as they have shaped us so much as people. We had so often seen them through situations where they doubted themselves, but we never once did. The second verse came from conversations with a couple of our best friends, about big life transitions and recoveries from losses.

Most often, both come at the same time. When we write for Tommy, we usually start with a verse one of us has or a title that feels relevant to what we’ve been experiencing lately. We write a lot of poems, and we love to reference other writers, history, and myths in our lyrics. We usually start with a concept and then really dig into it.

T – I want them to feel heard. It’s so special when people reach out and say they resonate with something we wrote.

W – Definitely. Want to offer a bit of relief and solidarity haha.

T – That’s also one of my favorite parts of performing – watching people sing the lyrics back to us, and with just as much conviction haha.

W – Totally. I hope the music can provide listeners a space to feel their feelings fully. Producing the music ourselves allows us to cultivate that space, to build a world that a listener could spend time in. If these songs can be the soundtrack to a thoughtful time in just one person’s life, I’ll feel like we’ve succeeded haha. Writing-wise, this project has become such a safe space for us, to tell our stories both bluntly and cheekily. I hope people feel the humor in it because that is such a coping mechanism for us. It allows us to talk about some really heavy experiences while also laughing at ourselves a bit.

W- I think tone has so much to do with the feeling of the song. It has to be congruent with the story or the lyric. I love warm, lush tones. I’ll use more reverb when I want it to feel existential. More distortion when we need a bit more angst.

T – My tone has definitely changed over time. I used to prefer brighter tones and now I find I tend to gravitate towards a darker, heavier tone. I love distorting guitars, adding fuzz, cutting high-end.

How and when did the two of you get together?

We met in Nashville in 2018. We were both session songwriters at the time.

W – The first time we wrote was in the summer of 2018. I had a really strong feeling about needing to work together more, but it didn’t make sense at the time. Tessa was just visiting from Vancouver, and I was splitting my time between Nashville and LA. In December of that year, I dm’d Tessa on Instagram, asking (half-jokingly) if she wanted to start a band. Through a series of trips between all three cities, we started slowly writing and cultivating the idea of Tommy Lefroy.

T – When a lot of our other songwriting work got derailed in 2020, we started spending a lot more time on Tommy. I was in London and Wynter was in LA. It wasn’t until the end of 2020 that we decided to fully launch the project, remotely.

W – My parents and my dad especially are huge fans of music. One of my first coherent memories is listening to Fleetwood Mac’s ‘Rumors.’ I’ve always been coming up with little stories and I started doing musical theater when I was 5. My sister was an artist and a songwriter, and I grew up watching her. I started my first band in the 8th grade and played with the same few friends throughout high school. We toured around Michigan in a GMC van. Then I got a degree in music business, in Nashville where Tessa and I met.

T – I’m not sure how or why I fell into music, neither of my parents were especially musical, but I’ve been obsessed ever since I was a kid. I was always writing, I loved making up poems and stories, and started keeping a notebook of songs I’d “written” when I was 8. I taught myself to play guitar when I was 12 (Taylor Swift’s ‘Teardrops On My Guitar’ was the first song I learned) and spent the rest of my teenage years gigging around my hometown of Vancouver, BC. Eventually, I landed in Nashville.

W – I play a white fender jaguar. It’s an American Reissue from like 2016. I replaced the pick guard with a pearl one.

W – I think Phoebe Bridgers actually might take over the world. I love Caroline Polachek, Christine and the Queens, Tiberius B, Younger Hunger, Samia, Dylan Fraser.

T – All of the above. I love Ruston Kelly too.

T – I’m really interested in heavy metal haha. I love watching documentaries about it. And I’m obsessed with coming-of-age movies, I’ve probably seen them all.

W – Lately, I have been listening to so much Del Water Gap it feels embarrassing. MUNA’s ‘Gayotic’ podcast is great. For entertainment, I literally browse clothes online with no intention of purchasing. I love Depop and Imparfaite.

Don’t see it as a disadvantage. We put off getting started in anticipation of hurdles that it turns out we could handle. We came in with a bit of a complex and felt like we needed to work very hard, to be excellent players and producers, because we were women. So much so that we built our own barriers to entry. Of course, you want to be good at your craft, but I think sex has very little to do with it. It’s really about instinct. Remember that women are magic. And trust your intuition, always.

W – I need to write to process my experiences. I always have. Music for me takes it to the next level, it allows me to open up and share more than I could otherwise because I am pretty introverted. I love creating in a way that is open to interpretation, that could feel deeply personal to someone who does not necessarily know the story behind it. I think there are so many universal themes in the human experience, and making music is my favorite way to explore that.

T – I make music because I need to because I can’t imagine myself doing anything else. I write to better understand myself, my relationships, the world.

What can your fans expect in the next six months? New music? Live gigs?

Our debut EP, ‘Flight Risk’ comes out November 17th. It is self-produced, and a lot of it we made remotely over the course of the last two years. We are so proud and excited to share it. We’re playing our debut headline show in London on November 15th. We hope to play a lot more next year, in the UK and also back home in North America. We’ve lived a lot of life since writing the songs on the EP so there will absolutely be more music next year. We’re excited to grow with the fans who already feel like friends, to meet them at shows and to keep sharing new music.