Home Interviews Jazzie Young Opens Up about “cigarettes & heartbreak,” Tone, and Her Creative... 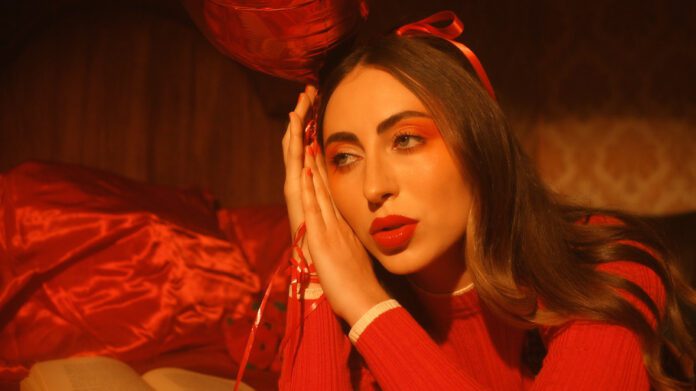 Jazzie explains, “This song is about the end of a relationship and the things that remind you of a person and a specific time. It’s that ending period where you know that the relationship is over and that there’s a good reason for it, but you can’t quite fully get yourself to move on from it just yet.”

Based in Los Angeles, Jazzie is the daughter of Jesse Colin Young, who sang lead vocals for The Youngbloods, whose song “Get Together” shaped the milieu of the late ‘60s. When she was 14, she began writing music seriously, followed by releasing her music in 2019.

Since then, Jazzie has released a series of singles and videos, her 2021 debut album, grown up & grown apart, and her new EP, 27 club.

The video, carefully crafted by an all-female team, radiates a ‘70s ambiance that conveys subtle shifts of light, shadow, and color, and imbues the visuals with an affecting residual mood.

Guitar Girl Magazine spoke with Jazzie Young to find out more about the person behind the music, the retro look of the video, and her definition of tone.

This is a hard one! I’d have to say first and foremost my dog, then my Taylor Acoustic Guitar, and maybe in third place my skincare routine? Hydrated happy skin is always crucial.

The music video’s aesthetic was highly inspired by the song itself. Whenever I write a song, in my mind it’s usually associated with some sort of color or color palette. That’s why each of the videos off of my latest EP has a distinct color scheme. For me, ‘Cigarettes & Heartbreak,’ the song, was always a reddish-orange, a bit vintage and aged but still very intense. The song itself is about the moments that are far after a breakup when the initial pain has subsided, but the dull ache is still there. I really wanted the visuals to aid that imagery. That’s why we also had the video take place inside of a bedroom, most of the time that’s where a lot of healing, thinking, crying, etc. happens post-breakup. Last minute, we added the idea of having a single red balloon represent the ‘lost love’ that the song describes, and we drew two faces on either side, a happy one and a sad one. It was such a simple concept, but I feel like it really added to the story of the video. My director/DP Shelby Parks and I named him Alfred, it was all a lot of fun to play with.

My dad is a singer-songwriter, and my mother grew up playing the violin and viola, so I was introduced to music at a very young age. When I was in kindergarten-elementary school I played classical piano and violin. Then when I turned 14 my dad gave me my mom’s old Taylor Guitar, that’s when I really started to write songs with chords. Before then I would write more ideas, or outlines of songs but they never really felt like a cohesive thought.

I was born in West Marin but spent my childhood on the Big Island of Hawaii after our house in Northern California burnt down when I was about one year old. I also spent my teenage and college years in South Carolina where my mother’s parents reside.

Honestly, I’m not sure. I feel like the musicians that I listened to throughout the years have inspired me more artistically than the places that I lived.

Did your sound evolve naturally, or did you deliberately push it in a certain direction?

I think a little bit of both. I never try to force a sound or a style, I usually like to listen to the song that I’ve written and then style the production around the natural direction of that song. However, on my latest EP I was clearer on the general genre I wanted the overall album to fall into and I think that did help make this EP feel more cohesive within its sound than my first one. I’m someone who really enjoys variety and lots of different styles of music so it’s sometimes hard for me to narrow down the direction I want my art to go in.

I play an acoustic Taylor Guitar and have recently been playing a Gibson Custom electric guitar. It has a beautiful sound for live music so that’s the guitar I took on tour with me this summer.

What is your definition of tone? And has your tone changed over time?

The tone of my music I think falls somewhere in between nostalgic, longing, and occasionally sassy. My vocals are tonally pretty soft, but the overall song tone really does depend a lot on the topic of the song. I do have a tendency to write toward the melancholia side of things.

What inspires your writing? Do you draw inspiration from poems, music, or other media?

It really depends. I’ve definitely had certain songs from other artists inspire a new song out of me. Sometimes it’s directly related to very specific moments or people in my life, and other times I’ve had people I barely know spur something inside of me that turns into a song. Lately, I’ve been inspired a lot by simple ideas, things that I’ve been mulling over or daydreaming about, sometimes that can help to ignite my imagination and songwriting. I think the cool thing about inspiration is that it can really come from anywhere if you’re open to it.

Although it differs from song to song, I’d say the majority of the time lyrics come to me first before the melody. I am at my core a lyricist. There are times where they come organically close together, and other times where I have a full lyrical song written in my notes app that I can’t seem to find the melody to for months! I also am a big believer that certain songs just come to you more fully formed than others. Some like to make you work a bit harder to figure out what they are.

Oh wow, I feel like genuinely there are so many artists thriving at the moment. I was just turned onto this artist, Lizzie McAlpine, who I think is a very talented singer-songwriter. I also discovered Noah Kahan through TikTok and he’s genuinely so impressive! Obviously, Phoebe Bridgers and the queen of songwriting herself Taylor Swift are all consistently killing the game.

What can your fans look forward to over the next six months? Music videos? Live gigs?

Hopefully all of the above. I have a show coming up on October 1st in Santa Cruz that’s with my dad! But I’m hoping to continue writing and start on the next musical project soon as well as perform more!