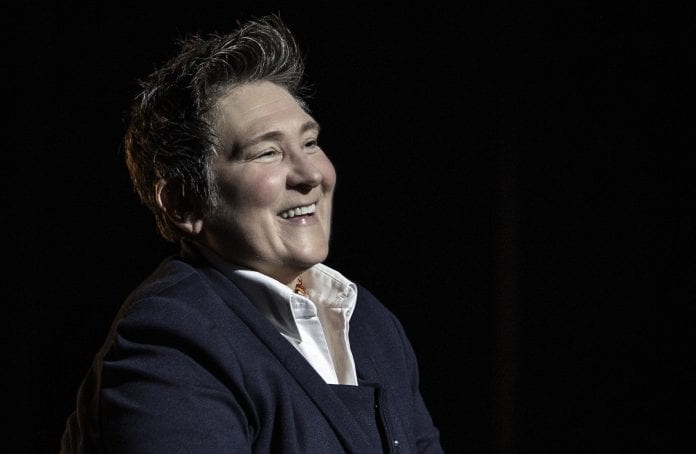 As seen in Issue 7 of Guitar Girl Magazine

Twenty-seven years ago, k.d. lang became an icon. The music world embraced her, audiences welcomed her with open arms, and it all began when she unleashed her hypnotically soulful voice on her second solo album, Ingénue which was released in 1992. The album symbolized a crossover for lang when it charted not only on the US Billboard Pop and Hot 100 charts but charted in the U.K. and her native Canada, as well. She went from a country singer dressed in kitschy clothes to a musical mainstream tour de force with a voice like liquid gold that had important things to say.

Lush and subtle, Ingénue allowed lang and cowriter-producer Ben Mink to explore jazz, cabaret, and Tin Pan Alley songwriting, resulting in some of her greatest compositions. “Ingénue was a change in vernacular and vocabulary in that it was personal-finding some romantic space,” said lang. “It was time. It was me. I had gotten to a time and point where I wanted to be me.”

Lang’s desire “to be me” allowed her to emerge as a groundbreaker, as well, not only with her music, but as a gay artist staking her territory on the country, pop, and folk music landscapes. Ingénue originally dropped in the early ‘90s alongside other LGBT groundbreakers like TV’s Will & Grace, Broadway’s Angels in America, and the Tom Hanks-Denzel Washington cinematic vehicle, Philadelphia. On Ingénue, lang remained removed in that her lyrics had a gender-neutral androgyny to them. The result, however, allowed her to cast a wide net as she sang about the human experience – of romance, love lost, desire, and sex. Ingénue clearly resonated, as it went on to become double-platinum and win four Grammy awards, including Album of the Year and Song of the Year for “Constant Craving.”

Also, in celebration of Ingénue’s anniversary, lang performed a 25th-anniversary concert from the Majestic Theater in San Antonio, Texas. The concert premiered on December 14 as part of the Landmarks Live in Concert: A Great Performances Special series on PBS. Landmarks Live in Concert features musicians performing at various historical or personal landmarks around the world with previous episodes featuring artists such as the Foo Fighters at the Acropolis in Greece, Alicia Keys at various locations around New York City, and Andrea Bocelli at the Palazzo Vecchio in Florence, Italy.

The Landmarks Live in Concert special featured an uninterrupted performance of Ingénue in its entirety, including lang’s GRAMMY® Award-winning hit “Constant Craving,” and her rendition of Leonard Cohen’s “Hallelujah.” She also performed such songs as “Save Me,” “Wash Me Clean,” “Season of Hollow Soul,” and “Miss Chatelaine” in addition to a previously unreleased song by lang and Joe Pisapia, “Sleeping Alone.” The special also featured an interview with lang by James Reed, an entertainment editor at the Los Angeles Times.

The concert DVD, Blu-ray, and digital formats are available via MVD Entertainment Group.
Song List:
“Save Me”
“The Mind of Love”
“Miss Chatelaine”
“Wash Me Clean”
“So It Shall Be”
“Still Thrives This Love”
“Season of Hollow Soul”
“Outside Myself”
“Tears of Love’s Recall”
“Constant Craving”
“Hallelujah”
“Sleeping Alone”