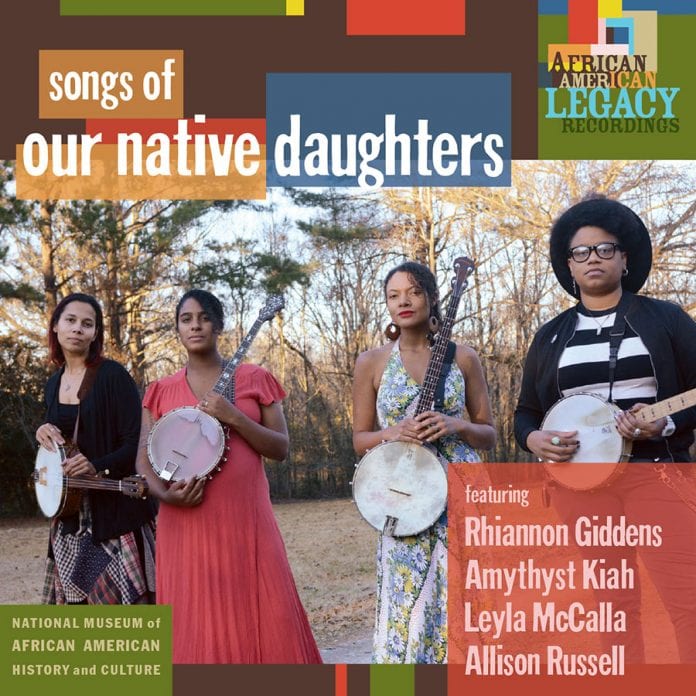 As seen in Guitar Girl Magazine –
Issue 7 – All Americana

In February of 2019, Smithsonian Folkways Recordings will release a heartbreaking and insightful thirteen-track album, Songs of Our Native Daughters written and performed by Americana artists Rhiannon Giddens (Carolina Chocolate Drops), Leyla McCalla, Allison Russell (Birds of Chicago), and Amythyst Kiah. As mentioned previously in our news section, the album is co-produced by Giddens and Dirk Powell (Balfa Toujours, Joan Baez) and “portrays the often-overlooked suffering, resilience, and agency of black women in the face of intersectional oppression throughout American history.”

Smithsonian Folkways Recordings says, “Drawing on and reclaiming early minstrelsy and banjo music, these musicians reclaim, recast, and spotlight the often unheard and untold history of their ancestors, whose stories remain vital and alive today. The material on Songs of Our Native Daughters — written and sung in various combinations — is inspired by New World slave narratives, discrimination, and how it has shaped our American experience, as well as musicians such as Haitian troubadour Althiery Dorval and Mississippi Hill Country string player Sid Hemphill, and more.”

Giddens pulled together three other talented black female roots artists to work with her on this project. “Gathering a group of fellow black female artists who had and have a lot to say, made it both highly collaborative and deeply personal to me,” she explains. “It felt like there were things we had been waiting to say our whole lives in our art; and to be able to say them in the presence of our sisters-in-song was sweet, indeed. I see this album as a part of a larger movement to reclaim the black female history of this country.”

We would like to introduce you to the women behind the music, Rhiannon Giddens (Carolina Chocolate Drops), Leyla McCalla, Allison Russell (Birds of Chicago), and Amythyst Kiah.

After watching a rape scene at a theater production of the 2016 film Birth of a Nation, Rhiannon Giddens explains in the album’s liner notes, “As I sat in the little theater in New York City, I found myself furious. Furious at this moment in a long history of moments of the pain and suffering of black women being used to justify a man’s actions; at her own emotion and reaction being literally written out of the frame.”

The Grammy-nominated artist is the co-founder of the Grammy Award-winning string band Carolina Chocolate Drops, as well as an immensely established solo artist. Her Grammy-nominated album, Tomorrow is My Turn effortlessly merged American genres such as gospel, jazz, blues, and country. Her 2017 album, Freedom Highway not only continued supporting her critically acclaimed sound but contained renditions of two civil rights-era songs. Having played for President Obama and First Lady Michelle Obama, it is apparent that Giddens’ music and voice are profound and held to esteemed regard. She is also the recipient of The 2017 Macarthur Genius Award and the Steve Martin Prize for Excellence in Bluegrass and Banjo.

The single “I Knew I Could Fly” was cowritten by Leyla McCalla and Allison Russell and inspired by Etta Baker. “Etta didn’t become involved in the music industry earlier in her life because her husband didn’t want her to, and that fact continues to confound me. I simply can’t imagine living in that type of reality,” says McCalla.

Singer, cellist, guitarist, and banjo player, McCalla is a complex and multi-faceted musician of Haitian descent. Raised in New York City and since moved to New Orleans in 2010, McCalla’s music is a representation of the rich perspective she has garnered from the world surrounding her. Capable of also singing in Kréyol and French, McCalla’s talent and passion are easily distinguishable within her album, A Day for the Hunter, A Day for the Prey in which she explores Louisiana-inflicted sounds of the deep Southland. It is this inspirational musical outlook demonstrated by McCalla that deems her as a crucial and inspirational component to the album, Songs of our Native Daughters. McCalla toured for several years with Carolina Chocolate Drops before her solo career. She released her third album The Capitalist Blues on January 25, 2019.

Talented instrumentalist and soulful vocalist Allison Russell wrote “Quashseba” about her paternal ancestor who was sold into slavery off of the coast of Ghana. Lyrics tell the heart-wrenching experience. “As we got deeper into the project, into the source material, slave narratives, and minstrel history, I kept feeling the parallels to my own life and experience,” she says. “I survived 10 years of sexual, physical, psychological abuse and dehumanizing treatment as a child at the hands of my white American adopted father. I came close to suicide, but something kept me here. A whisper of hope. A hidden light. I felt the presence of my grandmothers, great-grandmothers, and back—and I began to understand that the other side of the coin to the horror, inhumanity, abuse, pain, and fear of slavery is resilience, endurance, survival, hope, and strength.”

Russell has spent the last several years religiously touring with her rock ‘n’ roll band, Birds of Chicago. Their most recent album release, Love in Wartime speaks on the considerable efforts made throughout the ‘60s and ‘70s and highlights love as the indestructible through-line. Releasing and performing music that captures the many impactful genres of the South, it is most fitting for Russell to continue to promote the music that speaks to her soul and influences her art. Russell was also the founding member of the Canadian roots band Po’ Girl.

Amythyst Kiah’s powerhouse vocals can be heard on the opening track “Black Myself.” Beneath Kiah’s electrifying stage presence and soulful vocals lie a music lover and fan whose impressive taste influences her sound, crafting unique and enticing music digestible to individuals of any generation while simultaneously promoting the historic sounds of music’s rich past. A graduate of East Tennessee State University where she studied old-time music and music performance. Whether equipped with a banjo, acoustic guitar, or a full band, Kiah’s admiration for the Carter Family, Big Mama Thornton, Sister Rosetta Tharpe, Janelle Monáe, and countless others provides her with an outstandingly powerful voice, used to accurately represent the music and energy of the South.

The recording is part of Smithsonian Folkways African American Legacy Recordings series, co-produced with the Smithsonian National Museum of African American History and Culture. The wish from the writers, producers, and contributors to this project? Songs of Our Native Daughters is a gift to the hearts and ears of Americans for years to come.