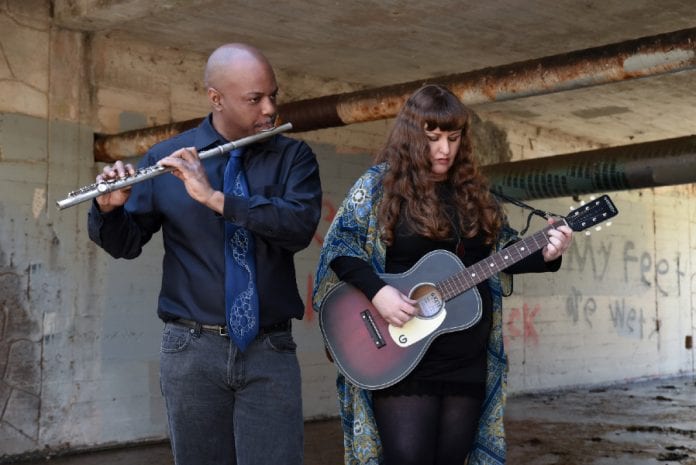 Austin, Texas-based singer-songwriter and guitarist Chase Frank introduces “This Big Blue,” her latest double single release, along with the instrumental version, entitled “The Only You.” The release was produced by, and features, Joseph Woullard.

Talking about producer Joseph Woullard Chase shares, “Working with Joe on ‘This Big Blue’ was great.  He’s very patient. As a songwriter, I get flurries of ideas regarding arrangement, so his steady production hand was helpful to keep the process on track. Joe is a great listener and composer. The parts he wrote fit the deepest meaning of my song and translated well musically.”

Originally from Long Beach, California, Chase not only performs solo but with her band The Harms, a surf-garage-rock outfit. She’s released five solo albums, as well as four more with The Harms.

Chase’s most identifiable song, “Sweet Apple,” was featured on FOX/Netflix’s series Lucifer, as well as being the title track for the movie Falcon Rising. She’s shared the stage with Nels Cline (Wilco), Free Moral Agents, Banyan, Minmae, The Happy Hollows, Thee More Shallows (Anticon), The Pity Party, Rademacher, The Good The Bad (Denmark), Mia Doi Todd, and Cold War Kids, along with a host of others.

“This Big Blue,” a song Chase performs frequently on tour, in her hometown, and with friends, waited for more than a decade to be recorded because Chase didn’t feel ready to record it. When she did, she approached Woullard to produce it.

Chase explains, “The song is filled with affirmations I tell myself every day to keep going. Some songs need that perfect storm to record.”

Recorded just prior to lock-down, the song’s significance increased as 2020 progressed.

Guitar Girl Magazine spoke with Chase Frank to discover more about the song’s inspiration, her influences, how she got started in music, her guitar, and how she achieves her distinctive tone.

I started in 4th grade then I became truly dedicated to my career in my late 20s. As a kid, I heard a lot of good classic music on the radio – specifically soul, R&B, Southern Goth, Motown artists. Female voices like Tammi Terrell, Aretha, and Bobby Gentry really spoke to me. I had learned to play cello in the school orchestra (music in the schools!!), then piano. My great aunt taught piano, so I started lessons with her in maybe 6th grade. My mom was given an upright piano by a friend. That really changed my life. Learning theory (and seeing it on the piano visually), then applying it to music that I heard on the radio – it really made me a fluid listener. I became fascinated with the construction of songs, and arrangements. Singing came easy, so early on I decided I always wanted to play an instrument too. I sang in the mirror, like everyone else as a kid, but real talk?  I wanted to be a backup singer first. I was fascinated with The Supremes,

My mom listened to a lot of vinyl and I soon discovered electric guitar. First, I heard the chunky guitar riff from “Heaven on their Minds” (Jesus Christ Superstar Andrew Lloyd Webber and Tim Rice).  I was like “WAIT, WHAT IS THAT!!?”  It shot through my solar plexus like a jolt. Then I heard Led Zeppelin – and again, I heard the combination of strings and electric guitar and it was so compelling. I liked the grittiness, the attitude, the tone. I started listening to early blues, realizing that’s where it came from. I picked up an acoustic guitar, then an electric guitar, and never looked back. When I heard my mom’s record of “Ode to Billy Joe” (Bobby Gentry) it brought me to tears. It sounds morose, but I wasn’t just after the sadness. I wanted to capture moments, just like her.

What inspired your new singles “This Big Blue” and “The Only You?”

“This Big Blue” is partly inspired by the decision to leave my hometown of Long Beach, where I felt I had gone as far as I could.  It’s like when you leave a bad ex, then they see you years later and say, ‘My God, you’re beautiful.’ Until I left Long Beach and moved to Austin (’08), very few really saw me. At first, I was singing to the people I perceived had held me back, and the ‘bro-culture’ and lack of female presence and good venues in the LA area music scene that bummed me out:

“Don’t let me catch you boy walkin’ down the street

Tryin’ to make others feel

Lower than your highness feels

Then I later realized that I was also singing to people like me to hold on. Saying “you CAN find the right people, there ARE those you can trust” and using my own affirmations:

“This world is heartless / So make your mark first

Don’t give up completely, don’t give up
Put your heart first / Listen to your thirst

You are the only you in this big blue”

Being an identical twin that lyric has special meaning. Growing up everyone wants you to be the same person, deceived by their eyes. Also, as someone now living with PTSD it gets dark. You have to keep yourself straight and remember that you are HERE not THERE in the past where bad things were done to you.

The instrumental version, “The Only You”, started with me wanting to highlight the amazing musicianship of all the players on “This Big Blue.” And, as the pandemic rolled through our lives, the song “This Big Blue” took on new meaning.  As I was hearing history all around me I had the idea to do the newsreel montage intro (smartly engineered by J.P. Bendzinski). It’s like a timestamp of 2020. It features Joseph Woullard leading on flute. The instrumental ends with the bell tolling, honoring those we’ve lost to Covid-19, worldwide.

How did you hook up with Joseph Woullard?

I first met Joe when I saw his afrobeat band Hard Proof in 2011, Austin, TX. He and drummer Stephen Bidwell (Black Pumas) formed the band. They’re amazing. I loved Joe’s unique approach to baritone sax leads, he was wild and explosive.

During the making of “She Turns”, with my Austin ‘girl band’ The Harms, I asked him to play bari sax & flute – our album was being produced by my friend Ikey Owens in Austin, TX.  Joe & I had similarly wide influences musically, and that became a bond. He later started an improvisational band called Dub Seance and asked me to join to play guitar, keys, dubs, percussion, whatever I wanted. I was excited to be in a band with someone heavily steeped in jazz, afrobeat, funk, soul, and blues who has also played with some of the greats, from Thievery Corporation to Gary Clark Jr., Adrian Quesada (Black Pumas, Ocote Soul Sounds). We’ve been collaborating ever since.

Anything can inspire a writer. Movies, books, a bird call (this really happened to me, listen to The Harms’ “Power of Objects”), a one-liner that stings, something you overhear someone say that’s compelling, art, a passing feeling, a bad moment in life, world events. I chase it ALL.

For me songs are born of being present and listening to life around me, literally, anything can be a spark. It makes it exciting. It’s also a thing I learned during bad experiences as a kid – write it and you’re instantly in the future looking back at yourself, digesting the event. Above it.

They say songwriters look into the abyss so you don’t have to. No subject is too dark for me, I’ve written about death, murder, power, it’s all fair game. Murder Ballads became a fascination for me, and I wrote about the Katrina “love couple” in “The Tale of Bobby Dean.” I also have another murder ballad on my solo release, Smile Trials called “The Ballad of Lucy Jane.”  Ironically, murder ballads are really fun to play.

Sometimes it’s like a lightning bolt, and if you don’t reach out and grab it, it disappears. Apps for voice recording are awesome, too. Sometimes I wake up in the middle of the night and record an idea, or write lyrics, so I don’t forget. But I always have a notebook, always.

My main squeeze is my electric ’65 Fender MusicMaster ii. I’ve NEVER found a guitar that was so responsive and inspiring to play. My fingers are short so I love the thin neck. I love the single-coil pick-up sound too, especially for my psych / surf-rock band The Harms. For acoustic, I’m feeling my Gretsch Jim Dandy Flat Top. I also have a no-name old parlor guitar that my sis found in the trash a long time ago, that’s my favorite writing guitar, sounds dope, though it’s hard to play (original strings!). I used both on “This Big Blue” / “The Only You.”

What is your definition of ‘tone,’ and is your ‘tone’ changing or the same?

Tone as meaning….The original tone, metaphorically, is like a director’s lens. For me it’s the same in music, the “fundamental” tone is there and all else should resonate with that. You can’t stop a good idea. The meaning, words, ideas all have tone, but if it’s fuzzy or diluted, it weakens when you add to it.

Production tone — on my solo stuff I like hip-hop-style production, which I learned from working with Ikey Owens. Beats from real drums (with exceptions), most things highly curated and sampled, except the main vocals, and guitar leads. With The Harms, we’re a girl band – we need the sweaty chemistry and presence of playing together. We record the whole band playing songs live, then overdub extras and vocals.

Actual tone – I feel a good musician’s tone will always grow, especially your ‘sound,’ one hopes.  But as for guitar tone, I will always go for that warm fuzzy vintage tone. My 65 Fender MMii through a Blues Jr. amp is small but mighty. Using that small amp allows for good breakups, natural crunch. I love delay on guitar when I’m playing dub, or using delay pedals on keys for wild unpredictable dub sounds. For my band The Harms, I like distorted vocals with slapback, which I learned from listening to early blues classics. I use delay & an electro-harmonix B-9 Organ machine to get a ‘60s organ tone with The Harms.

Because I have to. It’s my life. It’s always been with me and I’m so lucky for that. I have always been a writer and will always write.

Looking ahead, what’s next for you?

Lots of collaborations are in process. I have several singles in production now. “This Big Blue” is already being remixed by a couple of heavies — as they say — the song has legs! So my plan?  I’d like to write songs for others too, but I keep doing what I do. Write music, record music, tour, rinse, repeat.