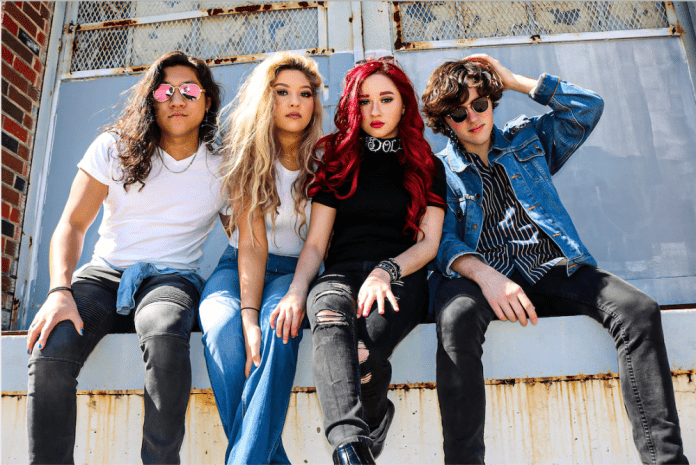 Meet RōZY, the high-octane fueled, badass pop-rock outfit piloted by sisters Zoe and Molly Flores, who unveils the music video for their cover of Nirvana’s “Come As You Are.”

The siblings began playing together at age 10 and 11, respectively. Only six-months after beginning lessons, the wunderkinds performed live before a jam-packed auditorium. Ever since then, the duo has been tearing it up, winning Wharton’s Got Talent in 2012, followed by taking the top spot at the Houston Livestock Show and Rodeo’s Rodeo Rockstar Competition.

With Zoe on lead vocals and lead guitar, and Molly on drums and backing vocals, they added Brandon Martinez (guitar) and Charlie Bubenik (bass) to round out the lineup.  RōZY performed on the Vans Warped Tour, at Houston Super Bowl LIVE, and have shared the stage with Puddle of Mudd, Jake E. Lee, Kings X, Stryper, Scott Stapp, Buckcherry, The Iron Maidens, Vixen, L.A. Guns, and Drake Bell.

Now officially signed to the Megaforce label, Zoe shares, “The band and I are honored to be part of the Megaforce Records family. With such legendary names in metal and hard rock on the roster such as Metallica, Kings X, Third Eye Blind and more, we are thrilled to work with an amazing American founded label and can’t wait to leave our mark with such a legendary company.”

Managed by Ron Stone, former manager of Nirvana, and Richard Ellis of Gold Mountain Entertainment, RōZY arrived on the Houston Chronicle’s list of “acts we’re excited to hear in 2020,” put together by Joey Guerra.

With “Come As You Are,” RōZY struts their gift for pumping out visceral layers of rough-and-ready sounds topped by deliciously throaty vocals.