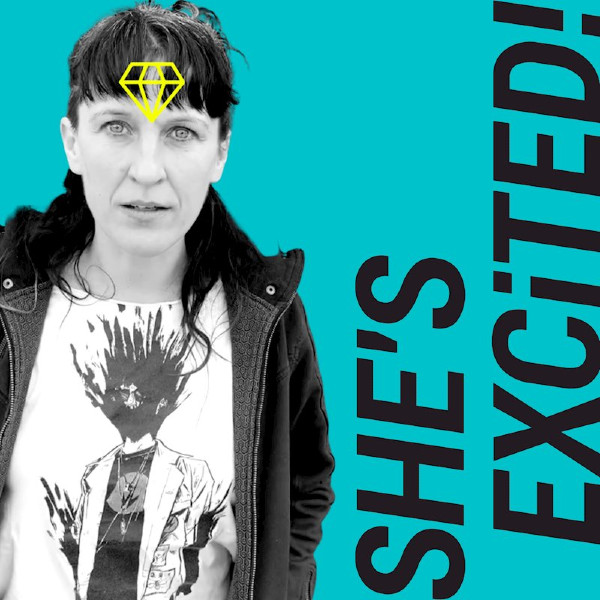 She’s Excited! explains, “In the center of ‘Shock Therapy’ stands the dream – be it in the lyrics of ‘Add Clarity’ or in the channeling of the song ‘Whole.’ I lead two lives: one when I am awake and one when I am sleeping. They are equally important to me, both personally and professionally.”

Originally from Munich, Germany, Anne Wichmann – She’s Excited! – takes inspiration from the boundless imagination of other artists who eschew the constraints of genre. Artists like Billie Eilish, David Bowie, and Björk. The result is her unique sound, a blend of electronica at once dark and gleaming with energizing lyrics.

Although She’s Excited! is Wichmann’s solo project, she collaborates with producers and artists around the world. Her exploration of movie scores, entitled Star Wars: Dark Side EP, co-produced by Auralnauts, was released in 2019, followed by entering the realm of Virtual Reality, followed by the release of her My Own Crazy EP.

A co-founder of XRE (Extended Reality Ensemble), she is involved in raising social awareness and solving real-world problems.

“Whole” rolls out on low-slung, thick shadowy colors, trembling and ghostly. Wichmann’s voice shimmers with otherworldly filtration and then goes pure, conjuring up memories of Annie Lennox on PEDs. Melodic and eerie and elegant at the same time, this is a premier, deluxe voice.

The Cameron Gary remix of “Whole” gives the track pulsating dance energy. In this version, the beat takes precedence – thumping and throbbing with cavernous effect. Next up is the Trovarsi Live Modular remix of “Add Clarity,” traveling on a vibrating cadence, fat and hefty, and then adding darkly shimmering colors as remote vocals inject the lyrics with tense flavors.

The final track is the Primitive Heart remix of “Add Clarity,” featuring oscillating synths, imbuing the harmonics with futuristic savors, like a soundscape from Ridley Scott’s Prometheus.

As excellent as the remixes are, the raw original versions from She’s Excited! hit harder and are more innovative and experimentally satisfying.