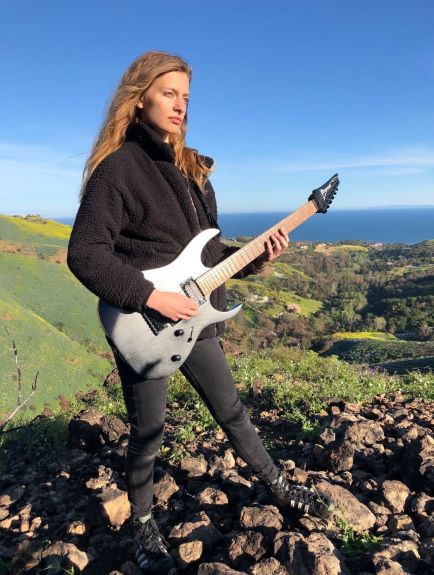 Meet Poland-born singer, guitarist, songwriter, and producer, Ania Thomas (or, simply “Ania”). The long-locked rocker who now calls LA her home has been shredding it up on many a local stage, namely at the “Gritty in Pink” jam, an all-girl concert series featuring a wealth of notable female musicians in the LA-area (she also pulls double duty as their social media manager).

Ania’s new music video for her single, “Poison,” from her EP that dropped on May 28th. We chatted with her about her long journey from her hometown of Koszalin to LA, the musician’s Mecca.

You just graduated from USC with a degree in guitar. Firstly, congratulations! How did it feel to be one of the only girls in the entire guitar program?

This all reminds me of that No Doubt song “Just a Girl.” Well, when I first began at USC as a freshman, I felt that I always needed to prove myself because I was a girl. I felt that I was viewed and treated as “weaker” because I am more “feminine,” but this made me very competitive. I practiced many hours, and usually on Saturdays, I was the first one in the practice room, and the last one to leave during weekdays because I wanted to prove my male classmates wrong and show women can be just as good at guitar.

By the time I left college, I had learned that double standards exist in our society, and that to deal with it, I will just NOT CARE what people think about me. There will always be haters, and we should all live for ourselves.

Overall, now I look back at my experience at USC and am glad that I made so many amazing friends that I call “guitar bros.”

Tell us what’s on your pedalboard and which guitar(s) you normally rock on stage.

My pedalboard still needs some work, and it is mostly gifts from friends or “regifts” of gear my friends tried to get rid of. I have the MXR Phase 90, multi-effects Valeton dipper strip with modulation, reverb, and delay, a reissue of Billy Corgan’s Electro-Harmonix Russian Big Muff, a Hall of Fame reverb, and lastly, a really cool Electro-Harmonix Hot Wax Dual Overdrive pedal. This last pedal is very exciting because it sounds amazing through any amp, and it gets me all kinds of sounds for heavy metal, alternative, punk, and rock.

When it comes to guitars, I play a Sterling JP60 (budget-priced Ernie Ball guitar), which is the signature John Petrucci model and a fixed bridge Ibanez RGRT421. I love the Sterling because it is a lighter, smaller guitar, the same with the Ibanez one.

You’ve cited St. Vincent as one of your favorite artists, though I do hear a bit of the “riot grrl” style in your music, as well as some elements of grunge. Which other artists have been majorly influential on your playing?

When it comes to music and bands, I’ve always been a huge fan of Nine Inch Nails, L7, Alice in Chains, Tool, Nirvana, Rage Against the Machine, System of a Down, Iron Maiden, and bands specializing in grunge, punk, riot grrl, and metal genres. I also really love music from the ’60s, ’70s, and ’80s. This includes The Doors, Pink Floyd, Steely Dan, David Bowie, Blondie, Iggy Pop, Jefferson Airplane, Heart, and others.

Then, going to music school, I have even learned to appreciate other genres such as Jazz, Latin, pop, and fusion. To me, listening to music is like eating food. I can’t eat the same thing every day, or I go through moods and “food cravings.” Sometimes I find myself listening to Mahavishnu Orchestra or Al Di Meola.

You have a few songs out right now, like the very ’90 s-Esque “Runaway” and “Doors Close.” Are those going to be part of a larger work, like an EP or album?

Yes. I am trying something new with releasing music. Instead of putting out four songs in one, I am trying to release one song along with a music video. These four songs will all add up to a four-song EP called Ania in Chains. All these songs are what I created while going to music school.

Have you produced all of your solo songs yourself? Tell us about your recording setup, what some of your go-to plugins are, and perhaps some helpful recording tips or tricks for those just getting started with production.

I produced “Runaway” and recorded it all by myself. “Doors Close” I had some help and tracked guitars at a friend’s house while the remaining instruments at my teacher, Smidi’s studio in Venice.

When it comes to my studio setup right now, I am still slowly building a studio and acquiring gear. Right now, my setup is very simple. I have my Yamaha THX modeling amp, headphones, a condenser mic, a Midi keyboard, and lots of cool plugins in ProTools. I am very lucky that currently, my friends let me use their gear and help me record parts of songs! I hope this inspires people to create and figure out how to create music based on what kind of gear they have at the moment.

When it comes to production, I think using your ears and learning your equipment really well goes a long way. Read the manual. Also, investing in Soundtoys plugins will do you good. I love the sound of the Decapitator plugin. I find myself using a tiny bit of it on almost everything: vocals, guitars, synths, drums, and bass, to add that tiny, noisy dirt and style to my tracks. Same with the SSL channel strip. I add a little bit here and there to add density.

What would you ultimately like to see happen with your music career? Would you like to perform as a solo artist, play alongside other artists, teach up-and-coming musicians, and/or continue growing the Gritty in Pink jam?

I would love to do a few different things throughout my career. I want to figure out who I am, what I do best, and how to keep improving and living a balanced life while always continuing to learn music. I definitely want to grow my own solo project, but I also want to play in bands as a sideman. Some of my dream gigs would be going on tour with the band, Ghost, or playing in the all-female cover band, the Iron Maidens.

Other projects include collaborating with more musicians and artists where I get to song write, record, produce, and play guitar on different songs. The end goal for my career is to be constantly making music, playing music, and living the life of a working musician. I want to continue to make music every day.

Do you have any releases we should all know about?

Yes! I just released my third single called “Poison,” along with a music video I filmed in Melrose with my best friends from USC. I am very excited about it because, with this song, I wanted to create something catchy but a little bit dark. It’s my stab at a dark pop song, but this one is also very inspired by St. Vincent.

Be sure to visit http://hyperurl.co/v6a87a?fbclid=IwAR1-scIJPxLdCa3FtQ1VNwHQ54ulUSIbcotgLEt4DTzH6sUNKpvDcQFmDHA to hear Ania’s new music. Also, check out her Youtube page via https://www.youtube.com/channel/UCRKQhPQkZXgc0vfuz27At1A/videos to watch some of her highly informative how-to videos, playthroughs, covers, and music videos.