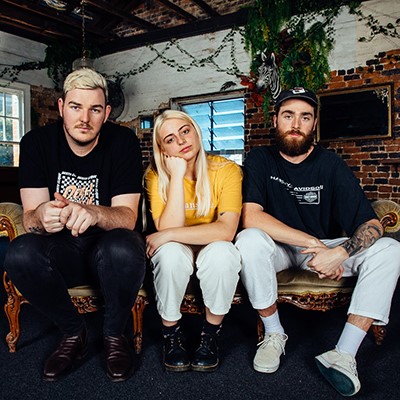 It’s currently a good moment for Eliza & The Delusionals, an exciting new band out of Australia. They recently finished a U.S. tour with Silversun Pickups, and their latest single Just Exist has hit Critical Cut status, reaching #1 at SiriusXM Alt Nation. Since achieving that benchmark, Just Exist has moved into heavy rotation and amassed millions of streams, giving the band a solid following.

I had a chance to chat with Eliza and her Delusional bandmates to find out a little more about their lives and influences, and here’s what I uncovered.

Tell me about the band’s name. What are you delusional about? Is Eliza as delusional as the rest of the band?

Eliza: Delusionals came from a line in a Blink 182 lyric. I think at the time, I decided to call it “Eliza and the somethings” because I didn’t believe I would find members that would be just as invested and supportive of the songs I was writing as I was. But I did, so I kind of regret the name choice. It’s also really hard to pronounce, so sorry to everyone for that.

The scene itself is quite
small but very supportive
of one another.

Where in Australia are you based? What is the music scene like there?

Ruby: We are based along the East Coast of Australia. Eliza and Kurt live in a small town called Pottsville, which is close to Byron Bay. Tex lives on the Gold Coast, and I live in Brisbane, so we generally meet halfway at the Gold Coast.

The music scene is great, especially in Brisbane. There are a lot of up-and-coming bands that have a sound that is very unique to Australia. The scene itself is quite small but very supportive of one another.

I went to college in the mid-’90s, and your music reminds me very much of the college radio rock that I enjoyed then and still enjoy. Are you fans of that era? What artists have inspired you?

Ruby: We love that era, both musically and aesthetically. Artists like No Doubt, Blink 182, and Green Day are big inspirations for us. The Overall ’90s vibe is a big influence for us, too, and is what we are really striving for as a band aesthetic.

You’ve recently had success with your single, Just Exist. I read a quote from Eliza, describing the song as being about “the balance of feeling depressed and feeling creative and inspired by those feelings.” Did Just Exist spring from a certain season of life?

Eliza: That’s right. I wrote the song while I was dealing with bad mental health, and I thought it was an interesting concept that some of my favorite ideas had come from the worst times in my life. I’m sure a lot of creatives and songwriters can relate to that.

What is the primary lineup when you’re playing live? In the video for Just Exist, Eliza was playing bass and guitar in different shots. What gear does the band use?

Ruby: Eliza sings and plays rhythm guitar, Kurt and Tex play lead guitar, and Ruby plays bass. The video was filmed/released before Ruby joined the band, and we were deciding on what the lineup would be for this American tour. We all use Fender gear, as we are a part of the Fender Next program.

How does the songwriting workflow happen among Eliza & The Delusionals?
Eliza: A lot of the older ideas came solely from myself, but it’s a lot more collaborative now. Myself or Kurt will start with an idea or melody, and it just goes from there. Usually, after it’s roughly demoed, we bring it in altogether and work on parts more.

You recently hit the West Coast for a tour with Silversun Pickups, which must have been pretty exciting. Was this your first U.S. tour? How do you feel that your music compliments theirs, and vice versa?

Eliza: It was our first U.S. tour. It was amazing. I’m really not sure. I just love their sound. I bought their album Swoon when I was 15 years old. I think because they really liked our music, it just worked really well and they were excited to have us out with them, and we were excited to be there.

Just always follow your gut feeling and don’t let people ruin your dream because they think it’s “too hard.”

If you had to boil it down, what would you say is the mission statement for Eliza & The Delusionals? What do you most want to communicate to the world?

Eliza: I guess we just didn’t let anything get in the way of us doing what we wanted to do, which was tour and write songs. We always were told about “how hard it was” to get into the music industry, but if it’s all you care about, it’s what you’ll do. And I guess we’re kind of proof of that? Just always follow your gut feeling and don’t let people ruin your dream because they think it’s “too hard.”

What’s next for Eliza & The Delusionals?

From Eliza – “‘Just Exist’ is about the balance of feeling depressed and feeling creative and inspired by those feelings. I find a lot of my best and most inspired creative ideas have come from some of the saddest and worst feelings I’ve ever felt which is very bittersweet. I hate feeling down but if I didn’t feel that way I think I would plainly just exist.”