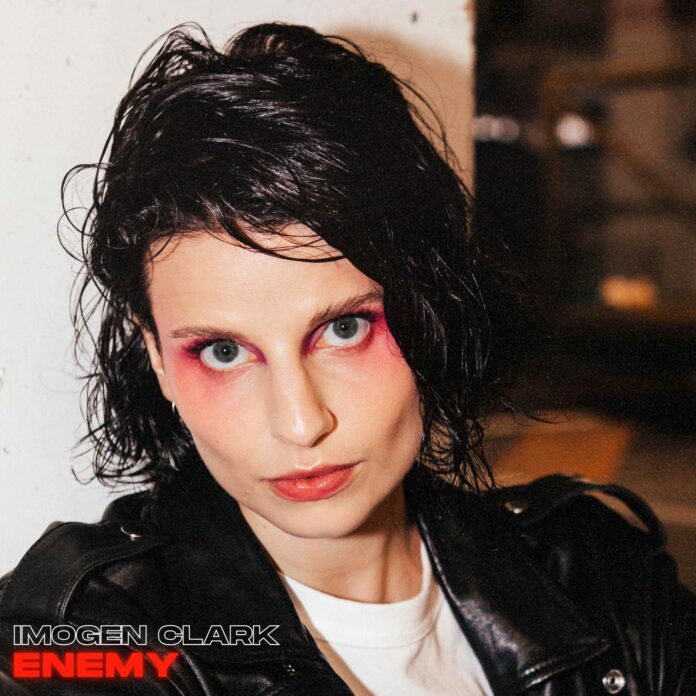 Imogen Clark is a singer-songwriter from Western Sydney, Australia, with a brand new single “Enemy” out now – a cathartic burst of melodic indie rock. Imogen started performing live at the age of twelve and hasn’t stopped since – even through COVID and Australia’s lockdowns, she’s managed to release two EPs and play sold-out shows in her home country.

Despite her young age, she’s won the respect of collaborators like Taylor Goldsmith (Dawes), Benmont Tench (Tom Petty and the Heartbreakers), Colin Hay (Men at Work), and more, who all contributed to her last two EPs. Imogen toured the US, UK, and Europe in 2019 and will be back in the States in July to wrap up her massive 100 Shows in 100 Days tour.

Today she talks to us about her influences, her new single, and more.

This song is about the feeling of freedom when you finally believe in yourself and how bulletproof that can make you feel when you’re on the other side of it.

My new single “Enemy” is about being gaslit time and time again, until you find the strength to believe in yourself and get your head together and break out of the relationship. In the song, it’s about a toxic romance, but I think it applies more broadly. Women are always being gaslit by men, whether by boyfriends or colleagues, or even family members.

Alex Lahey and I wrote “Enemy” at the end of 2019, a few months before the world shut down. It was almost a year before I did my first show back during COVID and I could play this song live, and it’s been in every set I’ve played since, and each time I feel like the song got leaner, faster, more urgent, and more cathartic.

I started doing these annual Holiday Hootenanny shows during COVID where I invited a bunch of musicians who I was friends with or admired to join me for a show where we collab on their songs or my songs or a cover, and it’s been such an interesting process for me because it opens up new ideas or angles on my songs that feel true to my music but I wouldn’t have come up with on my own. So I wanted to take that energy into the studio when we cut this song.

Ali Barter I’d sung with at my last holiday show and I loved our voices together, so I asked her to do backing vocals. Joji Malani I met when he was in Gang of Youths and then got to know properly during the pandemic when he’d left the band and moved back to Sydney, and he seemed like the perfect producer for this. Middle Kids made one of my favorite albums of last year and I’d met them after their Sydney show – Harry’s drumming was that driving heartbeat I needed on the song and I loved Tim’s mixing and how he balanced vocals and the rhythm section. Adam Newling brought that beautifully ragged Neil Young vibe on guitar and Joji suggested Earl Ho from Superorganism who luckily happened to be in town and he gave it that deep anchor on bass and so much interesting texture on keys.

We cut the entire song in one day at Free Energy Device in Sydney with Richie Belkner engineering and I really appreciated the time constraint – we had to make choices and commit to them in the moment and it stopped us from overthinking things or second-guessing ourselves. I feel like it helped keep that live energy in the final track.

The longer I do this, and especially after the last two years, I feel like I want my music to be a safe space for big emotions. Not being able to tour properly and only doing occasional one-off shows, the feelings of catharsis I used to share with audiences at gigs have been few and far between, and going into this next chapter it’s become even more important for me that I can give people that in my records.

Whether it’s heartbreak or frustration or wanting to scream or cry or jump someone, if you feel like the world is telling you to pipe down or act disaffected and bottle up those emotions, I hope when you listen to my music you feel like you can let it all out.

I was lucky enough to have musical instruments around the house when I was a kid, because my Dad wrote songs and played in bands in pubs. He had an old CW80 Maton acoustic that was beautiful and he was really encouraging when I started picking it up as a kid. I grew up on 70s guitar rock like Led Zeppelin and while I never got to Jimmy Page level, I think that was a big inspiration, and then later when I got into more folky / singer-songwriter stuff like Joni Mitchell I worked really hard to develop my finger-picking.

I started playing bar gigs in Western Sydney when I was twelve years old and almost always as a solo act. So I did my 10,000 hours all through my teen years building up my rhythm playing bashing out covers in the corner at pubs. It really locked in guitar as my instrument of choice.

Even on my solo gigs, I mainly play electric and almost always use my beautiful pink paisley Fender Telecaster, which is my pride and joy and has been for years now. I love the tone and how it responds when I really fang into it (which I tend to do). I’m about to get a Telecoustic from Fender and I’m super excited to start using it and have the same feel of playing a Tele with the acoustic sound.

My standard workhorse acoustic is a Maton 808, an Australian guitar brand who is probably best known internationally for being what Tommy Emmanuel plays. They have great pickups and are super reliable – even if I have a not-great sound guy it’ll sound good.

For band gigs, I’ve been borrowing a friend’s 1967 Gibson J-50. It sits beautifully in the mix with a band and it just has such a classic sound. It’s kind of the archetypal dream acoustic. Great for finger-picking too.

My holy trinity will always be Bruce Springsteen, Taylor Swift, and Joni Mitchell. They write songs that are deeply personal but also universally accessible. I’ve always wanted to write songs that grow from my deepest feelings and most emotional moments but could also have a stadium full of people singing along to them.

In the last few years, Phoebe Bridgers and Gang of Youths have been really important artists to me – very different artists in many ways but both masterful at not sacrificing lyrics for the sake of a strong melody or vice-versa. As someone who tends to want to squeeze as many lyrics into a song as I possibly can, Gretta Ray and Maisie Peters are very validating on that front.

You better believe it! I was such a road dog pre-pandemic, I used to do 70, 80 shows a year or more, so the constant dance of announce-reschedule-cancel I’ve had to do over the last two years has been driving me absolutely insane. So we have just kicked off my 100 SHOWS IN 100 DAYS tour! We are making up for lost time!

The first two months or so are going to be in Australia, finally getting out and about again after basically only being able to play Sydney for so long, then I’ll be wrapping up in the US for the last few weeks and I am so excited to get back over there for my first shows since 2019. We are announcing new shows on the tour all the time, so check my socials and my website and hopefully, I am coming somewhere near you.