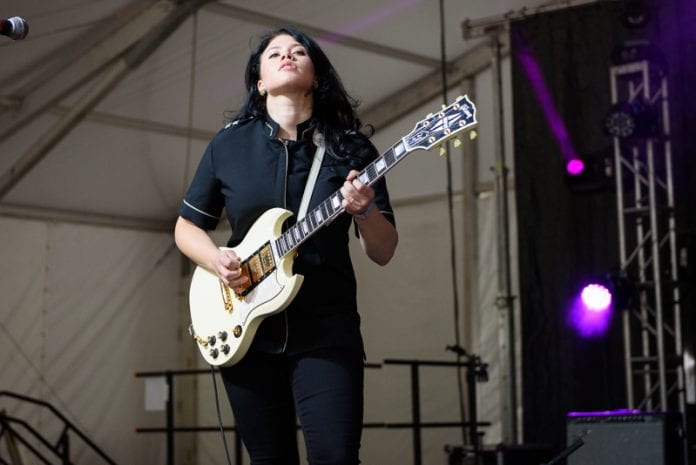 Blues musician and guitar player, Liz Brasher, is definitely paying homage to her influences with her blues sound. Brasher has recently released her debut EP, Outcast, ahead of her upcoming full-length album, due later this year. Critics have sung the praises of her new EP, and her ever-growing fanbase is joining in the praises. As Brasher states in a press release, “I don’t like rules, and I don’t like to be put into a box. I make music that’s garage rock meets the Delta blues meets gospel meets soul. It’s southern music — my version of southern music.”

We recently saw her perform at Shaky Knees and then chatted with Liz, via phone, about the guitars she uses (one is her “baby”), her deep roots and influences, and the female musicians she’d love to collaborate with. Find out more about Liz and her background:

What I play live, my baby as I call her, is a Gibson SG Les Paul Custom. It’s a re-issue of the first SG ever made, that Sister Rosetta Tharpe played on, and Mary Ford played on it as well. But Les Paul hated it, so he had them take his name off of it later on. That’s my baby that I play on primarily. Then I’ve got a Danelectro six-string bass. It’s not a baritone guitar and it’s not a bass guitar. It’s in between a bass and a regular guitar. It’s what they used in a lot of the old ’50s and ’60s records to tick tack; to copy what the upright was doing. It’s got this really unique sound.

Then the other one that I use live is a Mule Resonator guitar. It’s made by this guy, Matt Eich. His company is called Mule Resonator. It’s out in Saginaw, Michigan. That was a custom made Resonator with a pickup in it so that I can play it live pretty easily. Those are the three that I’ll use on stage.

Then on the records, it’s those. Then also I’ve played a Fender Telecaster that I have. Just a reissue of a classic ’60s one. Then Scott Bomar, the producer who I did my full length, he had some 335s that we used on the record as well. 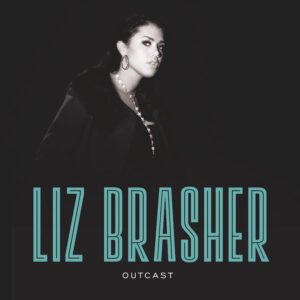 You love your guitars, lady!

That’s good! Do you have any endorsements with any of them?

Yes, you’re correct. [Her future] The full-length album we recorded before the EP, and that’s coming out later this year.

Your EP has garnered rave reviews by critics. You’re loved by everybody who’s anybody, and of course, your fan base is growing continuously. Do you plan on, are you going to play live throughout this year and then release your upcoming full-length next year?

Right now I’m on a two-month tour. My first tour across the US. After that, we’ve got Americana Music Festival that I’m going to be playing at. That’s in September. In October we’re hoping to release the full-length. We’re just giving some breathing room between the two. But yeah, it’s going to come out this year.

Growing up in North Carolina, in Matthews, I grew up in a church. That’s where I grew up, singing there. My Mom’s from the Dominican Republic, and it was a Spanish speaking congregation. Even though we sang a lot of traditional hymns, there was also a lot of the Hispanic influence rhythmically going on, too. I think that was in me, from the time I was born I was hearing that. That comes through definitely in my playing. Then everything that I had heard coming out of Memphis just had this drive to it. It just captures you as soon as you hear it. Everything that came out of Stax Records, just chugging guitar and deep tremolo. Those are the sounds that I love. It’s kind of like sounds that mimic the landscape of what that city is like. It’s relentless, you know? It’s got this river going through it that’s huge and really dangerous. I don’t know. I guess a combination of those two things would make for a very powerful sound. I think that’s what I kind of try to go for.

You’ve stated that your adopted hometown is Memphis. Do you find Memphis a very musical playground still to this day? Or do you think that music has gone away from that town? Is the feeling alive?

Right now with Memphis, I think Memphis is on the comeback. Because I think for a while it was neglected. It’s just been a lot of local musicians pulling their weight around the town who are all phenomenal. Now we’re seeing a huge resurgence. We’ve got Matt Ross-Spang, a huge producer out of Sam Phillips who produced Margo Price’s new record. Greyhound. Lots of stuff like that getting a lot of acclaim. Then Fat Possum Records, they’ve got a studio there as well.

I think Memphis is going to be the next big thing to hit. I hope it doesn’t become too mainstream, but I think there’s an energy in that city right now where it’s just waiting to happen, and it’s just the right time to come about. I think we’re going to see that soon.

Who are some strong female musicians that you’d love to collaborate with?

LB: Mavis Staples. I would love to do something with her one day. Lucinda Williams. I think that would be phenomenal. Then this is totally kind of left field, but Adele. Beyonce. I’m not opposed to that at all.

Catch Liz in a city near you by checking out her tour itinerary here!