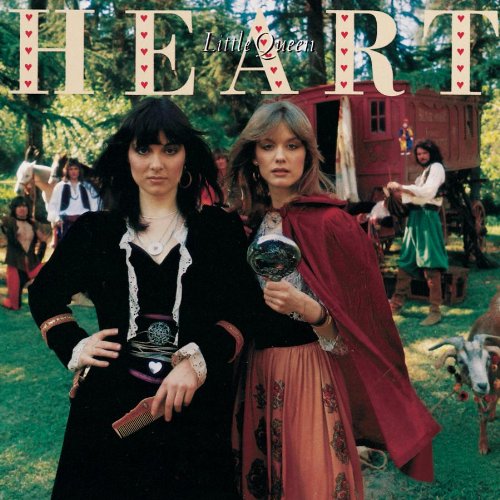 This week GGM is celebrating Heart’s groundbreaking third album, Little Queen, which came out on May 14, 1977.

In his 1977 Rolling Stone review of Little Queen, Billy Altman wrote: “Lord knows we need many more women in rock and roll.”

Four decades later, of course, many more women are rocking, but Lord knows Heart led the way. By the time Little Queen was released, Heart was a premier live act known for their versatile stage show and Zeppelin-inspired sound. And it was just the beginning of a very long and storied career for the sisters.

The album was not only an important one for the band but a milestone in music history, as well. From the full barrel charge of “Barracuda,” to the instrumental mystique of “Sylvan Song,” the band took creative license to experimentally rock.

The lineup at the time included:

After the success of Dreamboat Annie, the band started working on their next album for the Mushroom Label, titled Magazine. But record label and contract issues plagued its release. According to their producer at the time, Mike Flicker, from a 1999 interview with Blair Jackson, “The short version of a very long and dirty story is that we ended up in the position of losing the four songs that had been the start of the second album, and we found ourselves having to start over again, and that became the birth of the second album, Little Queen, which was on Portrait/CBS. ”

In true rock spirit, Heart and their manager broke for Seattle to record Little Queen.

But there was still the issue of the legally hung-up second album. Later, the Mushroom label would release an unauthorized version of Magazine with half-finished songs and live recordings. Afterward, the courts ruled Heart could release Little Queen if they still re-record and remixed Magazine at a later date for Mushroom.

Until then, the band recorded Little Queen rather quickly in 1977. The finished product would cement the band’s unconventional songwriting and melodic rock grooves. Its success also showed their consistency as a rock powerhouse fronted by two women…a rarity for the times.

The band was really becoming masters at merging their two styles of music. Little Queen’s ten songs had the folk elements of Dreamboat Annie along with the band’s trademark hard edge.

It’s a classic guitar-driven album, but one complemented with several instruments not very typically used in rock music like flute and mandolin. But it all made sense for Heart’s earthy but tough mix of ‘70s rock.

Nancy Wilson’s acoustic playing clearly paved the way for today’s singer/songwriters, and it’s especially awesome listening to her developing her sound and style. Plus, her preference for Ovation guitars cast a spotlight on the brand for years to come.  Nancy would go on to be one of the top female guitarists in rock.

Legendary guitarist Roger Fisher is one of the founding members of the band (from 1963 to 1980). His innovative electric and double neck mastery provided rich nuances and memorable solos throughout the album; his work is still duplicated by guitarists today.

Howard Leese was an important part of the band as well and would stay in Heart throughout the ‘80s. His hefty credits on the album include acoustic and electric guitars, synthesizer, piano, Moog bass, mellotron, mandolin, backing vocals, as well as orchestral arrangement on “Treat Me Well.”

But no question, the heartbeat of Little Queen is “Barracuda” — a timeless rock gem for its lyrics, riff and natural harmonics. On any given day you can still hear Fisher’s open E power chord galloping over the airwaves. But the song’s known for something infamously deeper. Forty-one years ago, Ann Wilson wrote the impassioned lyrics in the wake of mounting sexism from the music industry (namely, the fallout from an unauthorized ad issued by their record company). The promo featured the bare-shouldered sisters under a headline implying they were lovers.

The song also spoke to the overall inappropriate treatment the ladies experienced from men in the music industry.

It poses the question, have things really changed? Although women have permeated the music business, the respect conversation is an ongoing one. “Barracuda” is a reminder that offensive treatment has been happening for a long time, and still does; maybe not as obvious as radio station execs asking female musicians to sit on their laps, but in Hollywood (as we’ve learned) the casting couch is still part of the furniture.

The upside, “Barracuda” is fuel for self-empowerment. It’s a timeless example that a positive form of art can come from strong emotions – just like Ann did when she wrote those lyrics. Everyone has a song inside them – maybe it’s “Barracuda,” “Take a Piece of My Heart” (Janis Joplin), or perhaps “Dream On” (Aerosmith). Whatever that tune is, Heart reminds us the very best art comes from human experience and self-empowerment.

“Barracuda”
It was their second top 20 US hit and peaked at #11 on the Billboard Hot 100. The song’s charging riff and determined vocals fit the bill for the lyrical content. Wilson’s pipes alongside the guitar and drums is a ferocious combination. The main riff consistently drives the song, seasoned with Fisher’s organic harmonics. The song is still barreling along then ends abruptly — no fade out or soft vocal — just a blatant dead stop.

“Love Alive”
Written by the Wilson sisters and Fisher. “Love Alive” is a highly underrated song that takes the listener on a journey. It builds from a subtle guitar intro into a soaring rock song.

The soft acoustic intro blends perfectly with a host of percussive elements. After the quiet acoustics, the song builds and becomes the same powerhouse that Heart captured audiences with on “Magic Man” and “Crazy On You.”

Ann’s soaring vocals on “you’re up there under the spotlight” hover above all the instruments that come together and take the listener home.

“Love Alive” is emotive and encompasses what the sisters were masters at: Ann’s vocals complimenting Nancy’s articulate acoustic work.

It tapers off softly with the same delicate guitar and then leaves the listener in one cascading note surrounded by chimes. Then silence gives way to the quirky nature-inspired effects that tinge the album.

“Kick It Out”
This up-tempo number written solely by Ann Wilson has a strong chorus and revving electric guitar intro – a pure example of boundless cruising music. It became a power anthem for girls to live life on their own terms; foreshadowing the women in rock movement to come. Appropriately, it’s the second longest track on the record at 5:13 while “Go On Cry” is the longest.

“Little Queen”
The swaggering title track has a honky-tonk feel and attitude all its own. It has memorable guitar licks and a melodic style. Ann’s pronounced, stylized vocals flow around the guitar perfectly. Again, like past albums, she displays her skills as a flutist adding another layer to the song.

“Treat Me Well”
Nancy steps out on this one and sings lead vocals. She has a different vocal style than Ann but is also an adept singer. The song is atmospheric, and Nancy’s phrasing has a Karen Carpenter feel.

It’s not a rocker, but it’s what anyone wants – respect.  The song has a big symphonic sound for a largely acoustic piece.

“Dream of the Archer”
Little Queen is quirky at times with very unique songs that are unexpected. Having a song like this took guts and creativity…  “Dream of the Archer” boasts double-tracked mandolins and its lyrical and instrumental quality speaks to the medieval, minstrel feel of the album.

“Sylvan Song”
The experimentally rich “Sylvan Song” is reminiscent of the classic/progressive rock of the time period. It’s a landscape of layered guitars and expertly crafted instrumentation.

Little Queen was a big moment for rock and roll and women. A reminder to take a stand and do it with your ferocious craft as your voice.

Little Queen was important to me. It was the first album I bought at a record store with my own money. My older sister had Dreamboat Annie, but Little Queen was mine. The album was my purchase, my decision; signifying a budding independence and creative spirit for music and writing.

Personally, I fell in love with all the new and different sounds, harmonies, guitar parts and textural effects. The classic album is full of amazing acoustic and electric guitar work by Wilson and Fisher.

One thing that’s cool about Heart is that they combined a certain level of femininity with raucous rock. To me, they were similar to other ‘70s bands such as Fleetwood Mac that combined a leather and lace vibe. I always thought of bands and artists being about the music, not gender. However, the combo of differences can make for great, rich music written from different perspectives.

However, society still got in the way. But like any form of discrimination, someone had to kick it out.  Thank you, Little Queen, for encouraging women to play music and take no crap. Women can rock out in our lipstick and leather, guitars slung low, embracing distortion, or gently strumming acoustically –whatever we want. No longer viewed as novelties. We can be soft, strong, whisper or wail. It’s all on our own terms…and we should not be treated any differently because of our gender.

Yola performed at the Neptune Theater on February 16, 2020