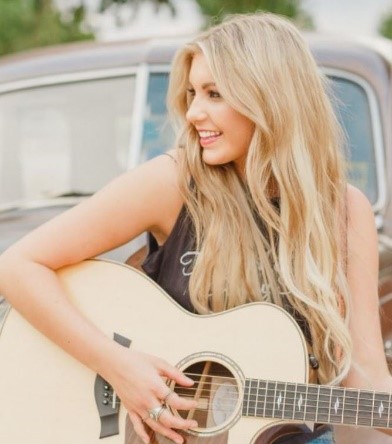 At age 16, Brennley Brown has accomplished more than some twice her age. A singer/songwriter from the moment she can remember, this teenager’s passion for country music and impressive vocal capabilities is what allotted her a slot on Season 12 of the hit NBC show, The Voice. Working alongside iconic artists such as Gwen Stefani, Blake Shelton, and Rascal Flats, Brown’s impressive resume continues to flourish as she partners with the legendary, Taylor Guitars.

What The Voice coaches had to say:

“The fact that you have that crying, that angst thing at 14 is amazing.”  Luke Bryan
“You gave a Grammy performance and you’re 15, which is just freakish.”  Adam Levine
“You are doing what you were born to do, no question about it.”  Blake Shelton

Preparing to expose herself to the world as the songwriter she was always meant to be, fans can expect fresh music from Brown within the year; and anticipate what is sure to become her long and prosperous musical career.

Are you having fun at CMA Fest so far?

Oh my gosh, yes! This is my second year playing, but it’s always crazy and so much fun.

As part of my research, I re-watched your performance on The Voice of “Up to the Mountain.” Where do you get the emotion that you use for that sort of performance? You are so young! Do you just have an extremely old soul?

Yeah, I think! Growing up I’ve always been like you said, an old soul, and I was introduced to classic country at a really young age. I think that that has kind of shaped the artists that I am today, but oh yeah, I’ve always really been an old soul.

What female performers inspire you?

I’m going to name just a few because there are so many to choose from. I love Dolly Parton and all that she stands for; I love her voice, she is so unique and stands up for what she believes in. I love Miranda Lambert. Incredible artist. I love that Miranda can just stand up on a stage and sing a song without any production – just stand on stage and be so authentic towards who she is. Those are my top two, but the list goes on and on.

Have you always been interested in specifically country music?

Country music is my heart and soul; growing up I listened to a lot of different music. My Grandpa was really into rock, but my dad was really into country, and my mom was into Christian, so it was a real blend of things. Over the last couple of years, and through The Voice journey, I found where my heart really was, and that was country.

Do you delve into songwriting at all?

Yes, I love songwriting. I’ve been doing it for as long as I can remember. I remember sitting in my room and writing little things, they probably weren’t good at all, but you have to start somewhere. I love writing with other people, it’s just so special, to get into a room, which Nashville is the songwriter’s town, and you literally get into a room with someone you have never met before, you write a song in like an hour. It’s just incredible, organic, and real, when you write a song in that short of time, but especially with someone you just met.

Could you tell us about your relationship with Taylor Guitars?

I’ve loved Taylor Guitars for as long as I can remember. I remember as a young girl really wanting a Taylor Guitar. I had to save up for it though, I saved up for a long time and eventually got my first Taylor, I think I was 11 or 12. Immediately after I played it for the first time, I knew I was never going back. I love Taylor Guitars and the way that they sound. Eventually, I went on The Voice and was playing my Taylor. A Taylor Guitar rep saw I was playing it and reached out to us saying he saw I was playing a Taylor and how awesome it was. We started talking and I got to go to their factory and see how their guitars are built. Then I played the Taylor booth at NAMM in Orange County, which was really cool, and they gave the artists performing a guitar. I was freaking out because I had never had anything like this happen! I told them I was so excited to have the opportunity, and that I was looking for a sunburst. They said that they don’t make sunbursts anymore. I said, ‘bummer,’ but that’s okay because I was still getting a Taylor, so that’s awesome! They then called me back about ten minutes later and said they were going to make me a custom Taylor. I was freaking out and crying; I was so grateful. It’s beautiful, and I just love Taylor Guitars. I love working with them and their company.

How was The Voice experience for you overall? What were some of your major takeaways?

It was an incredible experience that I am so grateful to have been a part of. It was crazy, let me tell you. The days started with getting up at 5 am, going to band rehearsal, going to stage rehearsal, wardrobe, recording, and then on top of it all, I was a freshman in high school. I was doing school for five hours a day, so it was a huge learning experience. Being from a small town, you know, not having a lot of opportunities to get out there and perform, especially at my age – 13, 14 – and then being able to go on The Voice and get to share my voice, talent, and who I am with America, was just incredible.

Where do you think your confidence to get up on stage in front of millions of people at such a young age comes from?

It’s something I think I was born to do. Also, my faith really gives me confidence in that area to get up there and know that God’s got this. I also feel at home and very comfortable on stage. But let me tell you, I do get nervous. Especially before I go on and standing backstage, it is major butterflies. But I think it shows that you really care about what you’re doing.

I read that you love vintage clothing, have you always been into that sort of fashion? Is it something we can look forward to seeing on stage?

I have always really been into vintage. Specifically, ‘70s anything, hair, outfits. I love the ‘70s era of fashion. I also love western, like Loretta Lynn and the beautiful dresses she wears. It’s been fun because I feel like this year, and while I was on The Voice, was me really figuring out how I wanted to present myself as an artist. I always knew who I was and what I liked to sing, but I was like, ‘how am I going to include the fashion part of this?’ Gwen (Stefani) was a huge part of that. She was so fun; she would say like, ‘hey how about this style of makeup for this week?’ So, we would play and mess around with what I was going to wear; it was so much fun.

Do you keep in contact with anybody from the show?

They’re very busy people and all of that, but they are so supportive. I just saw Blake (Shelton) last night at the Opry, he just won a CMT Award. We met and reconnected, and it was so good to see him. It has been a year since I was on the show. I can’t believe it has been that long! What’s so cool about the coaches is what connects them with the artists of The Voice is just the love for music. They are so genuine; I am so grateful for their support and guidance through that process.

What can your fans expect from you for the remainder of this year?

I am so excited to release new music – my original music. This is stuff coming straight from my heart, which I am really excited because after being on The Voice. It is a great representation of who you are, but you sing covers every week; so, I am really excited to show people who I really am as an artist through my music. Hopefully, an album will be out soon!