Raised in Chester, VA, but now hails from Nashville, TN, rising country artist Brinn Black moved to the “Music City” at the age of 18 to make her dream come alive. The raspy-voiced non-smoker was named after her grandmother, shares her “award-winning show choir teacher” mother’s love and gift for song and is an advocate for a number of Nashville programs.

From her press kit, it says, “60 seconds. That’s how long it takes to be completely captivated by Brinn Black”. It also goes on to say how she jokes that, “I came out of the womb in sequins with a microphone in my hand.”

The Virginia native also uses her musical talents with the creation of “Lyrics On The Lake,” a multi-day festival that benefits the Children’s Miracle Network Hospitals of Central and Southwest VA.

Guitar Girl Magazine sat down with the Nashville country artist to catch up on her past struggles, her recent single and what she would tell you younger self.

You have a professional singer’s pedigree. When did you start playing guitar?
About 11 years ago.

What is it about Nashville that moves you?
I love country music, and it just felt like this is where I needed to be.

You’re here at CMA Fest, how exciting! What have you had going on?
I know! I’ve had signings, different shows, a Renegade Radio show on Thursday, and a fan party on Wednesday.

What was your first guitar? What do you play now?
I play Breedloves. My first guitar was a used Fender acoustic-electric that I traded with my guitar player for a PA once I became a Breedlove artist. When I went to NAMM in LA for the first time about ten years ago, Breedloves had only been out for a couple of years. I was with my manager, and I was coming down the elevator, and I heard these guitars — it was like angels. I was like, “Ahhh. What is happening?” So, we went to the booth and talked to them and told them I had just written a song called “Breed Love.” So, they invited me back to the booth later to play. I picked up the guitar, and I ended up coming back and playing at the booth. I kept coming back and playing it all weekend because I loved it. And at the end of the show, they were like, “Hey, nobody’s bought this guitar. Do you want it?” I walked away from NAMM with that guitar, and it’s been like my child since. I love it.

How did you get involved in music? What was your inspiration?
My mom and then I also just did it. I started putting on little house shows when I was 4 or 5. My mom is a singer and a show choir teacher. I always sang in my church. For as long as I can remember, I knew this is what I wanted to do. So, there was no turning back. It was just like Nashville — coming here, doing my thing. I loved Broadway, too, growing up. So, I thought about going to New York for a minute — a tiny minute, but I was like, “No, I’m not an actor.” 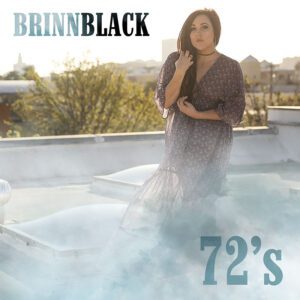 You released a new single this summer, “72’s” titled after a pack of cigarettes.
I had a boyfriend and he always smoked Blue Marlboro 72’s, and I told him, “I’m gonna write a song about your cigarettes one day.” I thought it was a great song title, so I put it in my phone notes years ago. Well, we broke up, taking a break, you know how that goes? I got with my girlfriends one day, and we were just swapping stories and looking through song titles. I threw out that title. They were like, “I love that.” We were talking about why our boyfriends have to use smoking as a distraction from having a hard conversation — “I just feel too much, I need to go smoke.” So, it turned into this love song, but it was written out of angst.

I think this song has morphed into this thing that the boys want to hear what the song says — put that down, pick me up, and the girls want to say it. We didn’t intentionally write it with that mentality. From people’s feedback, that’s kind of what it’s become, and it’s been really cool to see that. And my ex loves it too.

When you wrote the song with your girlfriends, did you write with your guitar? Is that your songwriting process?
We did, and yes, I do like to sit with my guitar when writing songs. I have this double capo system that I love. About ten years ago at NAMM in LA, I met the guys from Kyser Capos, and they had just come out with this little mini capo that’s in open E. I’ve always been a fan of the Indigo Girls and Lori McKenna, and I’m so in love with a lot of open tuning stuff. So, I tried the capo, and that’s been part of my sound now. It’s so easy. That’s what I used when I wrote “Daddy’s Medicine.” But then you can move it up the neck and add a regular capo on behind it. So, I just double capo it up all the time.

I taught myself guitar, and the open tunings were a way for it to sound big, and I didn’t have to be too technical with my fingerings and stuff. So, what started out as a way to simplify my guitar playing, but still be able to write, became part of my sound, which is really fun.

“I thought about going to New York for a minute.”

You were a victim of Hurricane Andrew and now you do a lot of charity work?

I actually am. My mom is a teacher, and she always does a lot of charity work with her kids. It’s been important to her to instill that in her kids that she teaches. She was a single mom and took us around with her to the nursing homes at Christmas time, bringing turkeys to families at Thanksgiving, that type of stuff. So, I just grew up doing it naturally. Our house got hit by Hurricane Andrew when I was 5. We lost everything and had to start over again. Having lived through it, I do a lot of disaster relief stuff because I get it.

What would you tell your “younger self”? Any advice to young girls that want to learn to play guitar?
Yeah. To not rely on anybody else or what they think. I actually wrote my first song when I was in fifth grade, and I didn’t tell anybody about it. I was walking home from the bus stop, and it came to my head. I went up to my room, wrote it in my journal, added a melody and everything. and was like, “What is this?” I felt weird because I didn’t know anybody that wrote songs. I didn’t even think to myself, where did these songs on the radio come from? But I remember ripping it out of my journal and folding it up and putting it under my mattress. And I never told anybody about it. I was afraid they would think it was weird.

I totally forgot about it until I was speaking to a class of fifth-graders, and they asked me when I wrote my first song. I had this memory flashback, and I was like, “Wow.” I can’t believe I did that. A lot was going on at the time at home. I don’t know; it was just weird to me. But it’s not weird if you write songs. It’s a gift. I remember calling my mom after I had that memory and asking, “What would you have done if I told you?” She said, “I would’ve been over the moon. I would have encouraged you.”

So, for any little girls out there that feel a lot and need it to express it, to do that. They don’t have to show anybody; they can keep it to themselves. And when they’re ready, they can show people. But to know that’s okay. And as far as guitar, I learned by putting on headphones and putting on songs I liked and just strumming and playing along with them. I looked up chords and never stopped learning. I’m still learning all the time.

What lies ahead on the dusty trail for Brinn Black?

Well, I have enough songs for an album, but definitely an EP.

For the latest on Brinn Black: