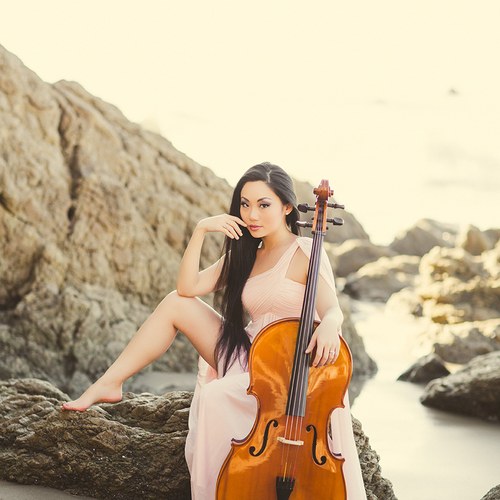 Originally from Shanghai, cellist Tina Guo moved to the U.S. at the age of five and began learning an instrument at the age of seven under the tutelage of her parents. After years of practice and professional training, she attended the USC Thornton School of Music on a full scholarship.

Guo has become an international sensation as a celloist and composer. She lives in Los Angeles with her husband Composer and Director R. (Ray) Armando Morabito and runs Tino Guo Contracting and MG Music International, while also heavily involved in philanthropic work.

Known for her distinctive sound, Guo has toured internationally, performing with various symphonies and most recently performed at the Krakow Film Music Festival in Poland in June. Not only a classical celloist, Guo plays the electric cello and the erhu, a Chinese two-stringed bowed instrument.

Guo has wowed audiences worldwide performing both instrumentally and as a “metal” artist with well-known bands, at conventions like Wizard World Comic Con and others. Her music can be heard in film scores and gaming. Guo recently released her first full-length metal album titled Cello Metal featuring John 5 and Al Di Meola.  We had a chance to speak with Guo and learn more about her diverse musical background, inspirations and her sensational new album Cello Metal.

GGM:  For people who haven’t heard your music playing classical and electric cello, how would you describe your music?

Guo:  As far as my new album, Cello Metal, this is my first full length industrial metal release. I cover some classic metal songs and five original songs, as well. In general, I basically play everything from classical, jazz, metal and everything mixed in between, except for country music — nothing against it, but it just doesn’t come naturally to me. I also play like a fusion jazz and whatnot, but metal has always been like a very deep rooted passion of mine. I do a lot of TV, film, and video gaming music and I love it. I was really busy with other things with music and work and wasn’t able to focus too much energy on my metal music for a while, so I am really excited that I was able to get back to it and finally put out a metal album.

GGM:  How old were you when you began playing the cello?

Guo:  I started playing the cello when I was seven years old. My dad is a cello teacher and my mom is a violin teacher, so I actually started with the violin, but it didn’t come very naturally to me so I switched to cello. Cello was a lot easier for me to get a hold of.

GGM:  Where are you from originally?

Guo:  I was born in China, and moved to the U.S. when I was five, and now I live in Los Angeles.

GGM:  What kind of cello do you play? What is your favorite cello?

GGM:  Tell us about your new album.

Guo:  The album is called Cello Metal and it’s available on iTunes and on Amazon. There is a cover of “Iron Man” which features John5 on guitar, and it’s the first single. On all five of the cover songs on the album, there are feature guitarists who are friends of mine. John5 played on “Iron Man” and Al Di Meola, who is a jazz fusion legend, played on “Sanitarium.” Nita Strauss, who is playing with Alice Cooper right now, played on the Iron Maiden cover. Since she’s in an Iron Maiden cover band, The Iron Maidens, I thought it would be fitting, Wes Borland played on a Slayer song.

GGM:  Did you have any particular inspirations when putting together the album?

Guo:  This album was a culmination of ten years of work. While working on projects with four other bands I was still trying to put together a metal album of my own. It was a different situation than what it’s like now. Like for my music. I will hire musicians to play with me, and it’s not that I don’t want to collaborate with other people, it’s just that way I can play only my music and just pay people to play my music. In the past when I’ve had bands, for some reason the members just had different tastes in music. The first band I was part of was an all-girl band when I was in college. I wanted to play heavier music and I was constantly pushing for that. I’ve also played other kinds of music while performing and touring. I did the Cirque du Soleil Michael Jackson ONE tour as a featured cello performer for two years so that took me away from metal for a couple of years.

So when I came back to LA, I decided I wanted to get it together to do this album or it may never happen! I am very happy that it’s finally finished and I think it’s something that I always wanted to do because it’s not really my background. I grew up practicing classical cello for six or eight hours a day. Every single thing I knew was all classical music. I really didn’t know anything about metal until college when I started experimenting with different types of music.

So compared to all of my music experience in general, it was very nice to go more in-depth to just listening and experimenting — figuring out what songs I wanted to cover. Not everything works on the cello, like some of the screaming — which is great but you can’t really do that on a cello. I had to find songs that were pretty melodic where even without lyrics it would still sound like a song. I also tried to not do anything that other cello players had already done or repeat the same thing.

It was just a really interesting experience for myself, just to be able to finally do this.

GGM:  Has there been anybody that you want to collaborate with that you haven’t?

Guo:  Well, my favorite band in the whole world is Rammstein and I would love to do a live show with them. It would be my ultimate dream! Joe Bonamassa and I will be doing a small tour in January which I’m really excited about. It’s a little bit different because it is like an all acoustic and world fusion concert and it will be filmed for PBS and a DVD that he is doing. It will be at Carnegie Hall, which I’ve never played, so I’m super excited about it. I believe we’re doing all the arrangements during the week of rehearsal in LA right before the show. That’s going to be a really fun challenge.

GGM:  What has been one of your favorite experiences up to this point in your career?

Guo:  If I have to pick one so far, it is the Cirque du Soleil tour that I did, the Michael Jackson ONE memorial tour that I did with them. It was just really an amazing opportunity to tour the world. We played at all these great arenas and I did that for two years and it was just amazing to work with such a huge production. So that was definitely a highlight for sure.

GGM:  What advice would you give to young artists and musicians?

Guo:  For me, as far as making a living as a musician or artist, I have been very lucky as I have never had another job. Of course, it was tough in the beginning. There were times when I could barely pay my rent.

For my day job, so to speak, I record for other people — I record other people’s music — which allows me to hone my skills as an instrumentalist cellist, both acoustic and electric. I know some musicians who aren’t interested in that, which is totally fine, but for me personally, I found it very useful. Doing what I love and taking every opportunity and experience to work with a variety of people playing all different kinds of music that I didn’t know about before helped me as a musician. Am I getting paid? Of course! And I’m also improving as a well-rounded musician and as a person.

So I guess my advice would be to be open to opportunities, because you never know what’s going to happen. Even when it seems like it would be something you wouldn’t be interested in, unless it is something illegal, just be open to it. Be open to new opportunities and meeting new kinds of people. Take the time to learn a little bit more about your instrument. It’s very possible to make a very good living from making music if you apply yourself and explore all the different facets of it.

Personally, it’s been a great journey and I’ve taken the money and put it back into projects for myself. For example, this metal cello album, I completely funded it myself from other projects that I have done in the past where people paid me for my services — just from my musical experience.

So, again, be open to different musical experiences, and practice a lot because it helps. Just go out there and perform and meet people!

Guo:  I have a recording session for a show on the SYFY network called Dominium, and then recording for the new Call of Duty game as well as one other game that I can’t talk about yet. A lot of recording projects. I‘m performing at BlizzCon this year and then I have classical concerts that I’m still trying to juggle, and I still have a few concerto dates coming up.

GGM:  Where do you envision yourself in ten years?

Guo:  My husband just asked me that question! Well, I am going to get a dog next year, so hopefully in ten years’ time, I will have at least two children. I would love to continue doing what I do which is playing music in a whole bunch of different projects, working on new albums, working on my original projects – and if by some miracle, maybe play with Rammstein — I would be super excited. Hopefully I will just be happy and taking good care of myself, spiritually, healthily, mentally, and physically. I guess my goal would be like that, a happy musician.