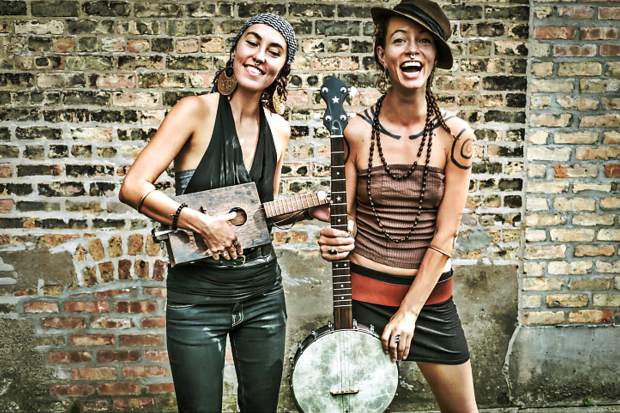 Rising Appalachia is a wonderfully eclectic band that presents their music in a beautiful, harmonic way. This band is led by sisters, Chloe and Leah, along with Biko Casini and David Brown, and are known for their creative use of instruments like the banjo, fiddle, guitar, stand-up bass, trumpet, drums, congas, didgeridoo, kalimbas, washboard, harmonicas and just about anything you can imagine that can make music.

Having been raised in the American South, they were heavily influenced in the sounds of the folk music they were surrounded by during their upbringing. The band has found a niche in the creative area of Atlanta, Georgia called Little Five Points. Through their unique music and creative talents, they have had the fortune of traveling the world and have touched so many lives with their inspirational music. Guitar Girl Magazine recently had the opportunity to speak with Leah of Rising Appalachia.

GGM:  How would you describe your music to others who have never heard it before?

Leah (Rising Appalachia):  We usually call it a mad karma world folk music, so our roots are very much in the folk tradition. Which for us it means a lot of world influences running from folk music from around the world and mixing in all these different kinds of folk music — and music that was and is played on front porches. We grew up with a lot of jazz and old time Appalachian mountain music that influenced us and a lot of music that was coming out of Atlanta in the 1990’s — some of the greatest southern hip hop, such as OutKast. So we have mixed all of those styles. Some Irish music, some jazz music, and then the thump of urban hip hop, and tried to create a platform of our interpretation with all of those influences.”

GGM: Where did the name Rising Appalachia come from?

Leah:  When we started the project, it didn’t have a name. My sister Chloe and I were making an album to sort of pay homage to our Southern culture upbringing. We didn’t have a name– just self-titled, Leah and Chloe, and so when we were trying to name the album itself and we had all these different ideas, it actually came to me in a dream. I called Chloe the next day and said I think I dreamt the name of our project. In my dream it was just very much a political statement as well as a visual image of our traditions. Growing up, our family was very, very deeply involved in music and art of all kinds, but specifically Southern Appalachian folk music and we’re also raised very urban. So the idea that we would be kind of rising out of this older tradition — it was sort of what we were originally really excited about and trying to learn how those traditions mixed. So it came out really instantly and we put it on as the name of our first album and then ultimately we took it on as the name of our project. We actually tried at one point to change our name because we realized we were doing a lot of different styles of music that wasn’t specifically Appalachian. Our fan base really kind of stood firm and said, “you know, we think it is a really valuable part of your story” and they really wouldn’t let us change it! So it’s really stuck and I think a lot of people really gravitated to it — just a redefining of Southern and Appalachian.

GGM:  Earlier this year you released a new album titled Wider Circles. How did the name come about and tell us about a few of the singles on the album?

Leah:  The album title came from our experiences over the last couple of years. We record with a four-piece right now and have toured around the world — all over the place – playing heavily the older material off of the earlier album. So this album percolated very slowly over the last two years. In those two years, we reached so many new communities. We toured new parts of the world and practically all of the world. We learned new traditions of music and saw so many homes and farms, projects and non-profits, and it became this really beautiful idea that we were writing, with all these accepting communities and other circles all over the world. It’s a tribute to that and also a beautiful poem written by an incredible poet named Rainer Maria Rilke, who has an amazing collection of poetry. He has one poem that one of the lines says ‘I live my life in widening circles… .’ So it’s a tribute to so many things – to the communities that we are reaching, and our music is reaching wider circles than we even know, and also to the non-profits and social justice of the world. All the ways that our work and our movement are widening — it’s a community connection. So that’s the reason the title came together. Two of the singles released are “Medicine,” which is song about all the teachers in the world working with alternative medicines and herbal medicines and teaching wellness. It’s an anthem for all those that are teaching and learning about healing. It’s a song that is influenced by folk and, to some degree, reggae/calypso and it has influences of a traditional folk anthem. The single “Wider Circles” is a tribute to so many we have connected with in our jobs and travels, and that song is really the story of our last two years and all of the people we have met. We wanted to make it lively and dance partyish and really make it a celebratory song.

GGM:  What’s your favorite song from the album?

Leah:  Good question. The interesting thing for me is that I think that has probably changed so many times. One of my favorites would be the first song on the album, “Novels of Acquaintance,” which I wrote years ago — a very slowly project. It’s a tribute to this area, and is also about so many people that come to our shows. We have heard their stories or they have written us their stories about coming to our shows and trying to find healing. That song is for all those people and I think it has such a different meaning for all of us.

GGM:  Are there any new instruments that Rising Appalachia has brought onto this record that hasn’t been brought onto a record before?

Leah:  Well, we have Mr. David Brown featured on this album and he’s the newest band member and he’s not been on our other albums. He is definitely our major instrumentalist with bass, guitar, and banjo — and he is excellent at all of them. The new instruments that have not been recorded before are the incredible gourd drum and a Bara, which is a West African — very beautiful and simple — bass drum. Also, my sister and I do a little double-fiddling. We don’t get to do too much and we thoroughly enjoy it. It also features our Mother, and her fiddling — which and is awesome, and our main teacher in traditions and music, and probably our greatest critic and our greatest fan! So it’s got some new surprises and I think it is very specific and unique to this album.

It was a pleasure speaking with Leah! Find out more about Rising Appalachia HERE

Currently touring across the Midwest to the Northeast, check out their schedule for a town near you.

It was a pleasure speaking with Leah and part 2 of the interview will be coming in the next couple of days! Find out more about Rising Appalachia here: http://www.risingappalachia.com/