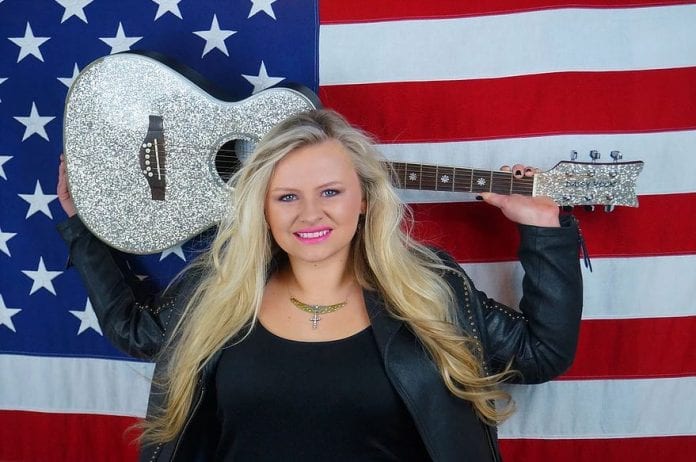 Nashville-based country music artist Dallas Remington is only 18 but has such a passion for country music that she left Kentucky to relocate to Music City to pursue that dream. Dallas says “Singing will always be a part of me.  Whether I’m singing at church, on the street, on a flatbed trailer, or somewhere in Nashville, I love every minute.” She began playing guitar at the young age of nine and says she knew she wanted to be a country music artist since the age of 11.

Remington recently released her EP Freedom, which is comprised of seven songs featuring two breakout singles “Never Turn Around” and “Found to Freedom.” She’s been busy talking to radio and touring in support of this new EP but found the time to catch up with us at CMA Fest where she was busy performing eight shows.

Not only does Remington write and sing original music, she loves to cover Miranda Lambert and Maren Morris, as well as perform traditional country music from artists that have had a huge influence on her such as Johnny Cash and Dolly Parton. She also likes to add some southern gospel and classic rock to the mix!

Great to meet with you here at CMA Fest.  Tell our fans a little bit about yourself.

I’m originally from Paducah, Kentucky. I’ve been here in Nashville full-time for almost two and a half years now. I had been coming to Nashville for a long time, and playing music and chasing the dream, so moving here made sense.

Has it made a difference in your music, making contacts and networking, being here locally?

Yes, it’s definitely made a huge difference. I’m from Western Kentucky, which is only two and a half hours away, but had gotten to the point where I would just drive down, go straight to a gig, and then drive home. Because hotels are so expensive, you know. So being here just made worlds of difference, because now I can go to a write every day, I can have meetings, I can have lessons, and I can do what I was supposed to be doing, but every day now.

Yes, Daisy Rock is awesome. I want to go to Winter NAMM, so I can go out there and meet them and go to that show. They sent me to Summer NAMM here last year, and they’ve been really awesome to me. I love my Daisy Rock silver sparkle acoustic. I use it in all my photo shoots, and I play it and it sounds great. I also have an endorsement with Capturing Couture straps. They are my favorite; so comfortable and pretty.

So, when did you first start playing guitar?

I started playing guitar a month before I turned ten, so for about eight years now.

Did you take formal lessons or are you self-taught?

I took lessons from an instructor who owned and operated a store where I’m from. He had a talent contest, so I entered that. I have had rhythm lessons from him and some lead, and I’ve had other lead guitarists teach me, too. My main guitar is acoustic. Besides my Daisy Rock, I play a Gibson Jumbo. My guitars are my babies.

So, your new single is “Never Turn It Around.” Tell us about it.

“Never Turn It Around” is a story about a girl who falls in love. It’s basically just about everyone that has been through that situation where you fall in love with someone, and you love them so much that you don’t want them to leave, but you have to let them go and let them chase their dreams. So, that’s what that story is about. I’ve faced that with my brother who has moved all over the country. So it’s like I love him and I don’t want him to leave, but you have to. So, it’s something everyone can relate to.

Is that going to be followed up with an EP or an album?

Yes, we actually just started selling the physical copies of the EP this week called Freedom. It’s music we’ve been working on for a couple years. My first single “Found to Freedom” is on it. “Never Turn Around” is on it as well. So, yeah, I’m very excited.

Now, are you going to go out touring to support the EP?

You put together a ministry called Melody for The Elderly. Can you tell us more about that mission?

Melody For The Elderly is a ministry I started where I go and sing at long-term health care facilities and assisted living facilities. I started it seven years ago – doesn’t seem like it’s been that long. The time has flown by. I started it about seven years ago because I noticed that a lot of people in nursing homes and facilities like that don’t have people to come visit them. Some of them don’t have a family, and so I started going once a week to visit. It’s just great for them to be able to come out and hang out with their friends within the facility and listen to music they grew up on. I play traditional country music, so it’s so cool to see their reaction. I had one girl who was actually a coal miner’s daughter. She had Alzheimers and every time I sang “Coal Miner’s Daughter,” she knew the words and she would start singing. It was just amazing for me and it helped me just appreciate the music more because I could see what difference it made in their lives.

Yes, the power of music!

One of my great friends I made there, his name is Joe. I hadn’t seen him before and he came out one day to see me perform. He could still walk but was in a wheelchair. He was going through physical therapy and so they helped him walk him over to me, and he came up to me and said, “Sing me a love song.” So, I sang “You” by Chris Young. That’s not traditional country, but off the top of my head, that was the only love song I could think of. He called my mama over there and said, “Come here, come here.” She was like “What’s up?” He stood up and started dancing right there in front of everybody and I was just like “oh my goodness!”

That’s so touching. That’s really a special and sweet thing for you to do.

Yeah, I loved it and it’s been a blessing for me. Unfortunately, with me being here in Nashville, I don’t get to do it as much as I used to; but I still go back to Kentucky and sing with them when I can, and I’ve done a few here in Nashville as well.

Who were some of your inspirations that got you into country music?

Well, I grew up on a farm in Kentucky listening to country music. My mama is very country. My daddy is very country. So, I grew up listening to Garth Brooks and Toby Keith, but my mom loved Lauren Lynn and Patsy Klein. So, I grew up listening to that kind of stuff, too. My biggest inspiration as to what I’m currently doing is Johnny Cash because when I was 11, my mom took me to Sun Records. I got to see his story and see how he went from being a refrigerator repairman to working on his music – to literally changing music! So, I’ve always looked up to him. I’ve obviously looked up to Taylor Swift because she came to town the same age I did she’s had such an impact on music. So, those have been two of my major inspirations just to see that they went for it and they did it.

I have met so many young girls that are so inspired by traditional country music and to see them singing that style and keeping it alive, I love seeing that.

Yes. So, that’s why in my sets we do a different variety of music. I love Don Williams as well, so we do some “Tulsa Time” and songs like that. And then I have some originals that sound like they’re traditional country because that’s what I love, but I also love classic rock. That’s where the guitarist comes out in me. So, my sound is like a mixture of Loretta Lynn, but then also mixed with some of Lynyrd Skynyrd. I love AC/DC and stuff like that. So, it’s an odd mix, but I like it and it works. That’s just both of my loves in music combined, and I try to do that the best I can and respect both the genres.

You are very committed to your faith. too.

Yes, I was very blessed to grow up with parents that had me in church every Sunday, every Wednesday night, and every Sunday night. I grew up going to church three times a week. We are very close, and church is a family affair.

Does that shine through in your music?

Yes. I actually have some gospel songs that I’ve written. I also played with a youth praise band when I was about 13 or 14, and that helped me be able to play with bands and be a musician. That helped me worlds with being a musician in a band. I was homeschooled, so that got me around kids my age, and it was just a major blessing to be able to do that as well.

Right now, we are going to keep promoting the EP. We are working on booking gigs, so hopefully, do a lot of touring this year and continue promoting the single. Right now it’s #89. So, I’m very excited to see where it goes and just keep going and hope to see things happen.

Great. What do you have going on at CMA Fest?