Home Interviews Emily Wolfe: Guitar has been her comfort 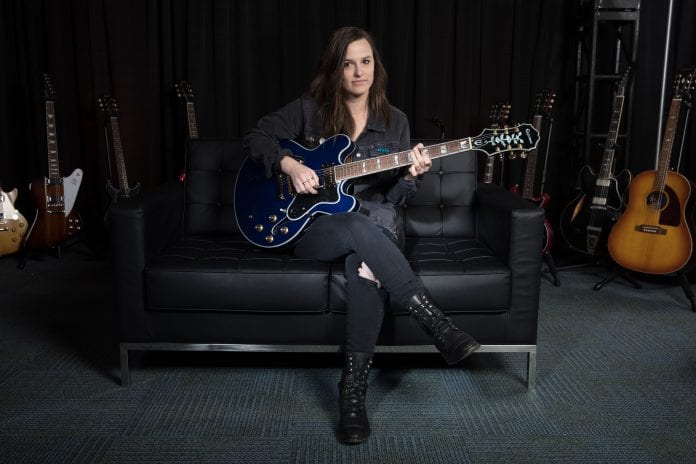 Emily Wolfe is a rising star who started playing guitar at the age of 5. The Austin native singer and guitarist, originally born in Raleigh, N.C., launched her solo career in 2012. After independently releasing her debut EP Roulette in 2014, she has toured with the likes of Toadies, Heart, and The Pretenders. In 2017, she teamed up with producer and keyboardist of the Alabama Shakes, Ben Tanner, and released her debut self-titled album, which has drawn references to Demi Levato fronting Queens Of The Stone Age.

Tell us about who and what inspired you to become a guitarist.

The first time I saw a guitar was when I was 5. I was instantly inspired by it and immediately knew that it would be a defining part of my life. My uncle was a musician, and I always looked up to him, so he was someone who inspired me to be a guitarist. He had a bluegrass band, which I saw as a club of people like me. I wanted to be a part of that. I also picked up the guitar seriously after a family move when I was young; and since then, it’s been my comfort for any intense emotion I feel.

Have you found any challenges being a female in the industry?

I can’t say I haven’t had challenges being a female in this industry, but I do know that every industry has its faults on that front. This industry is wild for everyone no matter what you define yourself as, but I notice things starting to turn around for the better. My Gibson rep and her team are mostly women, which I find truly inspiring. The only real challenge for me as a woman is practicing hard enough to show up the boys.

Who would you like to collaborate with in the future?

How do you like to go about crafting songs? What is your process?

I usually start with a guitar riff that either pops in my head while I’m alone or while I have a guitar in my hands already. I can’t just sit down and write when I decide to. It seems to happen when I least expect it, or when it’s inconvenient. Sometimes a word or phrase will really resonate with me, and I’ll put a melody to that and flesh a song out that way.

Up until about a year and a half ago, I didn’t play with my left pinky. I played B.B. King style, with just my index, middle, and ring finger. I started working up my pinky strength and studying modes and music theory at the same time, so one of my favorite exercises is to go through all the modal scales. It’s boring but very effective. It also really opens up new soloing possibilities.

What advice do you have for people starting out in the industry?

Find out what your sound is and focus on honing that. If your live show really kicks ass, people can’t help but notice.

What musical equipment is your preference, and why?

My Epiphone Sheraton, my pedalboard, and my tube amp. The interaction of those humbuckers with my pedals is pretty magical. I use a Fulltone OCD, boosted with an Earthquaker Devices Tentacle and stacked with a Fulltone 2B Boost. It creates a huge sound, and it’s important that I fill as much of the mid-range space as possible since I’m the only guitar player in a three-piece. After the gain stage is delay, reverb, and tremolo. Exaggerated tremolo is my all-time favorite effect because it takes me in and out of lead lines so rapidly. It almost causes my ears to pulsate, which is such a cool feeling.

Tell us your favorite moment of your musical history so far.

My favorite moment was playing La Grange with Peter Frampton and Billy Gibbons at this past Winter NAMM at the Gibson party. I felt like I was in a dream. Peter Frampton’s amp was right behind me, so I got to hear his playing super close up. Then Billy pointed at me to take a solo, and I blacked out, but apparently, it was pretty good! I’ll never forget what that looked like.

Do you have many hobbies outside of music?

Outside of music, I love being with my wife and two dogs. Outside of playing music, I love gear. I read as many publications as I can about new gear coming out. I love collecting pedals and soldering. I also really love anything involving aliens and UFOs.

What are your hopes and plans for the future?

My hopes and plans are just to play music every night. It’s my favorite thing to do – playing live.