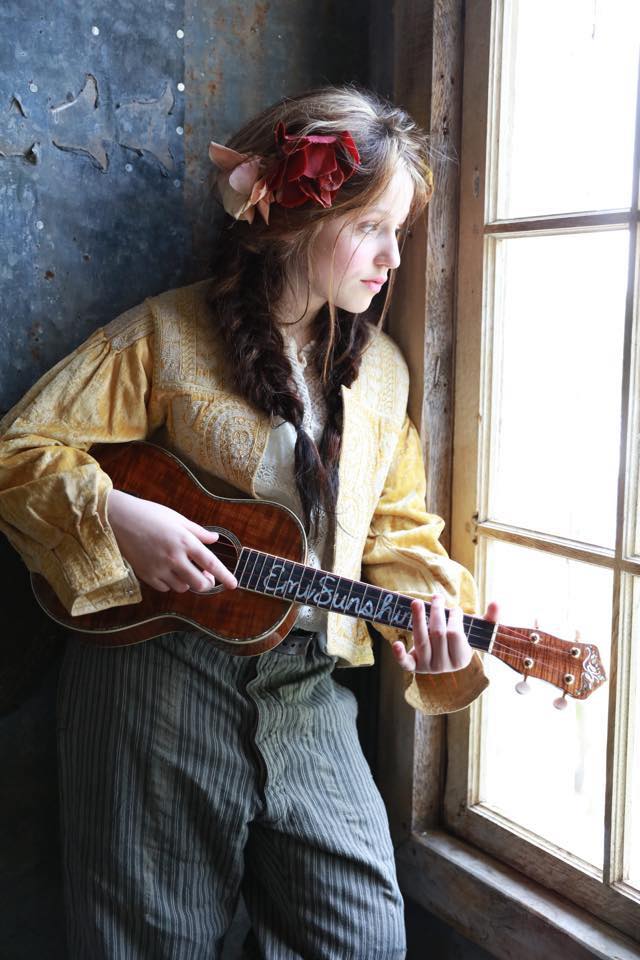 “Prodigy” may be the best term to describe the astonishing EmiSunshine. The 14-year-old singer, songwriter, and multi-talented musician has graced some of the most famous stages in country music, performed multiple times on national television, and produced successful original music that she lovingly refers to as “old-time music turned upside down.”

Sitting down with us at CMA Fest, EmiSunshine chats about how she fell so deeply in love with music at such an early age, which instruments resonate with her the most, and what exciting ventures the young star has in store for her fans!

It’s so much fun! I am really glad to be here.

You’re so young and already incredibly talented; what or who was it that inspired you to get into music?

I started singing at a very young age because of my grandmothers. They were all singers, and it runs in my family. I’ve honestly been singing ever since I can remember. I started writing music when I was around five years old and playing the ukulele when I was seven. After that, I just started playing any instrument I could get my hands on.

When you first began writing, did you know they were songs or was it more like poetry?

I was always adamant about playing music, and my mom was an amazing songwriter; so for me, it was always songwriting. When I was very young, she would start writing little songs with me, but I was about five when I wanted to write my first real song.

You play so many different instruments, is there one in particular that resonates with you most?

Probably the ukulele. It was my first instrument I learned to play, and I absolutely love it. I have a deep connection with my ukulele because of the sound it makes when I’m playing it. I’ve always been extremely partial to the ukulele.

Any female musicians or singers that have inspired you?

Mostly Loretta Lynn. I’ve always listened to a lot of her around my house. My house revolved around all different types of music, but there was a lot of Loretta Lynn. My mom told me all about her and her story, and I just thought wow, she is a powerhouse who has so much spunk.

Have you always wanted to make country music, or are there other genres that you hope to try?

My music is a little bit of everything. Like I said, music was all around the house growing up. My grandfather would play the Grateful Dead one minute, then Jason Isbell the next. There was always Loretta Lynn and the Dixie Chicks. I didn’t really know what genre I wanted to be in. When I was around five or six years old, I decided I didn’t really have to have a genre, that I could really play whatever I want. What I call it is old-time music turned upside down.

Have you and your family always played music together?

My uncle Bobby, my brother, my cousin Doug, and my father all play in my band with me. So, it really is a family thing.

You’ve had some impressive performances at legendary venues. Where do you find the courage to get up on stage at such monumental locations?

I’ve never really been afraid. I guess growing up, my family always taught me to stay true to who I am, love who I am, and to never let anybody change that. I think I’ve never been afraid because I know that this is what I am supposed to be doing.

What have been some stand out performances of your career thus far?

Probably the Grand Ole Opry performance or the one at the Ryman. I can’t really choose between the two. They were both so amazing. The only time I’ve ever really been nervous was at the Grand Ole Opry. I wasn’t scared by the crowd, but of that legendary circle on the stage. Once I walked out there though and started singing, all those fears faded away.

What would you say to other young girls that also want to get into playing and performing music?

For me, I started at a very young age, but some people wait until later on. One thing I can say is that always remember who you are is the best version of you. Keep your kindness, keep your compassion for others, and don’t change that for anything. If you do that, you will be on the track you’re supposed to be on. If you want to play music and get out there and show people who you are, put in the practice. People are going to come around and try to tell you what to do, but one thing you always have to do is stay on your path and listen to your heart.

What can your fans look forward to from you for the remainder of the year?

I was recently on Steve Harvey’s Little Big Shots! I’ll be on there again soon, so keep an eye out for that. I also have a new store opening up in my hometown of Madisonville, Tennessee. It’s going to be all types of things I love. It will be called Emmie’s Closet. Finally, I’ll be working on a new album soon! It is something I am very proud of and can’t wait to get it out into the world.