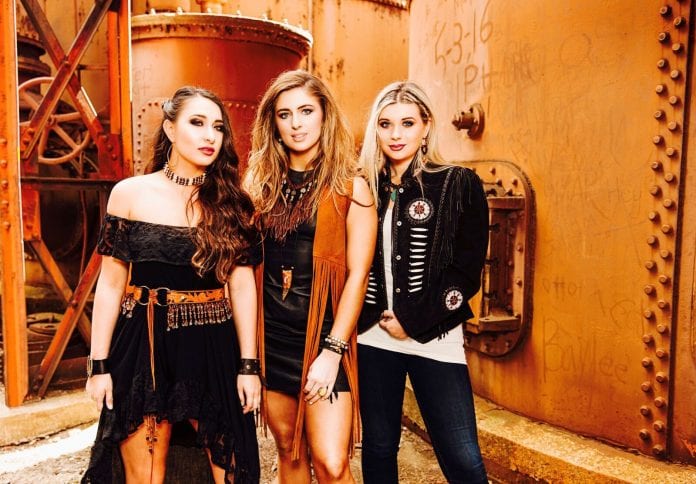 When first meeting Sweet Tea Trio, the bond Savannah Coker, Kate Falcon, and Victoria Camp share is tangible within the environment, instantly making those surrounding them feel as if they too are a part of this amazingly talented trio. Aligned together by their shared vocal coach after beginning as solo artists, it appears that Sweet Tea Trio was, in a sense, meant to be. Discovered by now manager, Kid Rock, and opening for some of the biggest names in country music, Sweet Tea Trio has gained an undeniable fandom who celebrates their iconic rock/country, harmonic sound.

How have you guys been enjoying CMA Fest thus far?

Victoria:  We just got in last night, but it’s been pretty fun so far!

Have you been able to see anyone perform yet?

Savannah:  No, but I could have sworn we heard Heidi Newfield driving up! That would have been really cool. We’ve been in a mad dash to get over here and start with our interviews. Traffic is terrible. We did see Chris Lane in the parking lot!

Could you fill us in on how the three of you met?

Victoria:  It was five years ago, and we were, quote-unquote, solo artists, but we were so young it wasn’t an actual career yet. We just loved to sing, and we had a mutual vocal coach named Steve Pennington. Steve was basically teaching each of us lessons on how to sing harmonies. He stuck all three of us in a room and had us learn, “Hell on Heels” by the Pistol Annies. Oddly enough, we typically do that number almost every show now! Steve then had a gig set up for us the next day, to sing that one song, and it went over really well. After that, we just stuck to it and ended up quitting our solo careers to become a trio.

You all three have an impressive aesthetic! What fashion icons do you look up to?

Victoria:  For me, it’s got to be Stevie Nicks. I love everything about her! She’s my girl.

Kate:  I like Karen Fairchild. She kills it in the fashion game. If I could dress like her every day of my life, I would!

Could you tell us a bit about your relationship with Kid Rock?

Victoria:  We are extremely lucky that he loves us so much. He discovered us in a YouTube video where we were singing a song that we had written for a hunting company. His fiancé loves to hunt, so he told her to check out these three chicks. Eventually, he thought that there was actually something more there. He sat on it for a bit, and after a while reached out to invite us on his cruise! When he emailed us, we honestly thought it was spam! We thought there was no way Kid Rock could be emailing us!

Kate:  Yeah! Because at the time they were referring to him as “Bob,” and we didn’t know that was his real name! So we were extremely confused.

Victoria:  But that’s how everything began to flourish. We’re really thankful because he sees a lot in us.  It’s a blessing he has basically taken us under his wing. He’s helping us with our record, and he is even managing us now. He has been a light in our lives, and we just love him.

Who are the female performers that have influenced you the most?

Savannah:  Shania Twain, for sure.

Victoria:  But if we’re talking Guitar Girl, Nancy Wilson is my jam. She rips it. I want to be a little mini her.

Kate:  There are also so many emerging female musicians coming into the industry. It’s awesome! Girl Power!

You guys have opened for some big names, Kid Rock, Bon Jovi, Alabama… Who else would you love to open for in the future?

Kate:  We love Thomas Rhett. They have such a cute family. We’d love to just hang out with them!

Victoria:  I have a list at home of who we’ve opened for, and I add to it after every show. It’s really cool to kind of look back. We’ve been doing this for five years now, which is a speck in real time, but a lot can change in five years. We’re happy to say our list has continued to grow.

How is the songwriting process amongst the band?

Victoria:  We all three definitely have our strengths in the writing room.

Kate:  If we have a co-write, all three of us are always going in there.

Victoria:  We love writing together because it works so well.

Are there any songs that you want to record, but can never quite get it completed?

Savannah:  Most of the time we finish a song on the day that we start it, but all the really good ones take a couple of days to finish.

Victoria:  We’ve got three or four that are for sure going to go on the new record, but they’re not even finished.

Savannah:  But we know we’re doing it anyway!

Where do you grab your inspiration for your music?

Victoria:  I think a great rule to live by with your writing is to not write about things you don’t know about. You want to be a pure representation of the words on the paper.

Savannah:  A lot of the song’s hooks and ideas come from our own conversations with one another. Our songwriting bells in our heads will go off, and we’ll know we found something. The other day we were talking and I said, “The devil is charming.” We instantly knew that was something special and ended up writing around that theme.

How would you describe your sound to someone who has never heard you before?

Kate:  Authentic country with a little bit of rock.

Victoria:  We have so many different influences that it blends into the sound where you kind of question, is this country? Is this rock?

Savannah:  And tons of harmony!

Victoria:  Yes! We for sure drop that bluegrass element in there, too.

Savannah:  That is what I personally live for, is all of our harmonies and vocal arrangements.

What’s going on with Sweet Tea Trio for the remainder of 2018?

Victoria:  Well, we’ve got a ton of cool shows coming up. July 18th we will be at 3rd and Lindsley, in Nashville.

Kate:  We are headlining! It’s our first headlining show there.

Savannah:  I believe we are also going to be at Exit/In, but check out our website, Instagram, Facebook, Snapchat, all of our social media! In the fall we are hoping to start recording on our next EP.