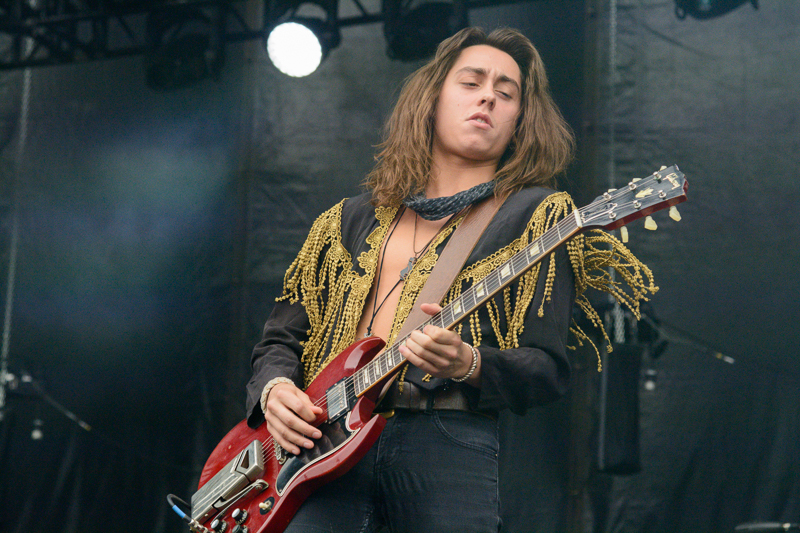 Home Guys Greta Van Fleet’s Jake Kiszka charms & chats about being on the...

Upon greeting me with a white carnation, Jake Kiszka (guitarist for Greta Van Fleet), instantly had me smitten. It’s safe to say Kiszka’s an old soul, and might as well be, since he and his band are playing the new wave of classic rock for generations old and young. It’s known that their musical influences stem from blues legends like Muddy Waters, Robert Johnson, Howlin’ Wolf, among others.

Their current double EP, From The Fires, resulted in their single, “Highway Tune,” reaching the coveted number one spot on Billboard‘s Rock Radio Charts for over a month, including 17-million Spotify plays and over 15 million YouTube views. Their second single, “Safari Song” was just as successful, with landing number one on U.S. Rock Radio and 10-million Spotify plays. Their current 2018 headline tour dates sold out, along with a handful of music festival performances. The opportunities for these gents is boundless and there’s much more to come, with their full-length debut album due out this summer.

Jake and I chatted after their set at Shaky Knees Music Festival in Atlanta, Georgia, one of their many performances on a sold-out tour through October. When asked how they managed to not burn out, Kiszka mentions that it helps when “you have a day or three off in-between.” He also acknowledges that “it’s pretty excessive, I’d like to say, and you get to a certain point where it’s like you’re totally out of energy but you know there’s always one day scheduled [off]. I would say that our age, in this circumstance, is advantageous given that we can just rock and roll.” And man, can they rock and roll!

Their influences consist of the female persuasion, too. When asked who the biggest influencers, and hopeful collaborations were for him with women and guitars, he’s quick to mention that British blues guitarist, “Joanne Shaw Taylor is certainly up there. I love her playing. It’s very bluesy, and I think that we all come from a big pro-blues background, so I can appreciate that.” He also included Halestorm‘s lead singer and guitar player, Lzzy Hale because she’s “one great person, and one great guitarist. I’d love to work with her.” Other notable influences for Jake are Joan Jett because of her “sincere simplicity and attitude. That’s a great approach to it.” With these guys’ longevity inevitable, it’s no doubt that Hale, Jett and Taylor will be looking forward to collaborating with Kiszka and his bandmates. Timing is certainly on their side.

Catch Greta Van Fleet on tour in a city near you. Click here for all tour dates through October!