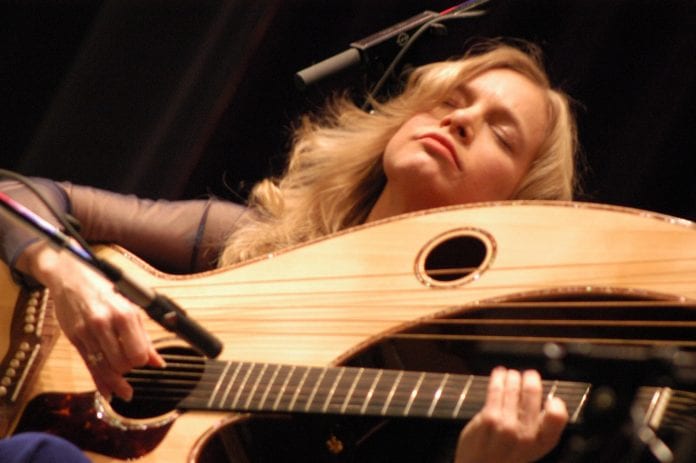 Not resting on her laurels as a guitarist, Muriel Anderson’s new collaborations and exploration into the harp guitar shows an artist who is always growing and evolving.

“Muriel Anderson is a good friend and a great guitarist.  She deserves national recognition.” ~Chet Atkins

“Just one hell of a great player …a great personality and what I like is the touch that Muriel has on the guitar, the way she plays it like we all wish to play.” ~Les Paul

“…She has demonstrated excellent technique and has the fine musicianship to communicate well to her audiences.” ~Christopher Parkening

With those types of endorsements, Guitar Girl Magazine wanted to meet one of the world’s foremost fingerstyle guitarists and harp-guitarists, Muriel Anderson.  Muriel has worked with some of the world’s finest musicians and was the first women to have won the Natio­nal Fingerstyle Guitar Championship, among many other awards. Not only does Muriel continue to tour internationally, she holds guitar workshops, produces instructional materials, and is the founder of the Muriel Anderson All Star Guitar Night® and the Music for Life Alliance charity.

GGM:  What were your musical influences?

Muriel:  My grandfather was a musician and played sax in John Philip Sousa’s band, so I thought to be a musician was the coolest thing anyone could do.  I grew up listening to folk and bluegrass. When I heard Doc Watson, that was my biggest guitar influence. Then I started playing jazz in high school, and fell in love with the music of Pat Metheney and the Paul Winter Consort. The only way I could get into a college music program was by playing classical guitar, so I reluctantly went into that, but then heard the music of Christopher Parkening, and was so inspired by his tone and phrasing.  Later, Chet Atkins became an important influence.

GGM:  How did you initially get together with Les Paul?

Muriel:  I was playing on the Steve and Johnnie live radio show on WGN Chicago when they told me ‘You have a caller on line one. It’s Les Paul.’ At first I thought it was a joke until he came on live radio and said he enjoyed my music and invited me to guest on his show if I was ever in NY on a Monday night. I did several times and later presented an All Star Guitar Night in his honor at the Ryman Auditorium in Nashville. We co-hosted the show and it was great fun!

Muriel:  On the La Guitara tour, I used my Tierra Negra flamenco guitar that they [the renowned German duo that Muriel often tours with] gave me as a birthday gift, and a Mike Doolin 13-string harp guitar. I find the Stonecastle Blues Boy pedalboard handy for my with Seymour Duncan / D-Tar equinox and mute pedals so I can go back and forth from the harp guitar to the flamenco direct signal in combination with DPA mic. And of course GHS Muriel Anderson signature strings. I think these strings really improve the tone of my guitar.

GGM:  You decided to use your talent to help others that are less fortunate.

Sure, it’s only natural to give back when others have been generous with their time when I was first learning.

The Music For Life Alliance was started with funds raised from my live show “Muriel Anderson’s ALL STAR GUITAR NIGHT®.”  We try to bring together and support many grassroots and national organizations that get instruments and lessons to kids.

GGM:  I see you also have a lot of instructional material published, so do you give back by teaching also?

Muriel:  I do a lot of workshops, and also a few private lessons via skype and as time allows along my tours. I’m really encouraged by the response to my new 123 Fingerstyle course, published by Truefire. People are finding they are getting a handle on fingerstyle when they didn’t think it possible before.

I also make my arrangements and compositions available as sheet music/tab pdf downloads on my website store.  www.murielanderson.com

GGM:  When did you get your first guitar?

I was eight years old. A friend of my parents, Adele Knight, was throwing away a guitar. I picked the garbage out of the sound hole and tuned up the three strings that were remaining on it. On the way home, I started figuring out melodies and making up tunes in the back seat of the car. My parents realized I had an affinity for it and signed me up in a class led by our friend Anne Jones at the Jones School of Folk Music. Starting out accompanying songs and playing with other people right away was a good way for me.

GGM:  When did you realize you wanted to be a musician?

I always knew that I was to do something that would affect a large number of people in a positive way and it was my job to figure out what that was. It was so obvious to me that I literally thought everyone was consciously trying to figure out how to do that thing that they are called to do. When I was in about first grade, I figured it was to be in the arts, but didn’t know which one. When I was in 7th grade, I had a dream that I was carrying my guitar to school for some reason. As I walked, the guitar became heavier and heavier with each step until finally, I just set the guitar down, sat on top of it and rode it to school. It lifted a couple inches off the ground and took off. I was having so much fun that when the school bell rang, I didn’t get off. I just kept riding around on the playground with my guitar. So when I woke up from that dream, I realized that the guitar would be my vehicle.

GGM:  Did you study formally?

Muriel:  When my folk guitar teacher Anne Jones said she couldn’t teach me anything else, we went around looking for teachers. Eventually, we found Ray Tate’s advanced class at the Old Town School of Folk Music. My parents drove me into the city from the western suburbs every week, because of course I was too young to drive. It was a great place to learn some jazz and blues music as well as fingerpicking and flatpicking tunes. I joined the high school jazz band, during which time I figured out the basics of chord theory. Then at DePaul University, I started classical, only because a bluegrass major wasn’t available then! Over the summer before college, I heard the music of Christopher Parkening, and I was enthralled by his tone and phrasing. At DePaul, I studied from one of Parkening’s former students, Leon Borkowski, and took Clara Seigel’s chamber music workshop. Both were great teachers for me.

GGM:  Are you on tour right now?

Muriel:  The next tour starting this week is S IL, Ireland, England, Canada, upstate NY, Tokyo, Memphis, Louisiana, Texas.  Then is my annual Saturday-After-Thanksgiving concert in Downer’s Grove, Illinois, and finally a little time home in December before I head back to IL to play the Woodstock Opera House Christmas guitar night.

GGM:  It was great chatting with you, Muriel, and we’ll definitely see you at NAMM at the All Star Guitar Night on January 26, 2013.

For more on Muriel Anderson, visit her site HERE.