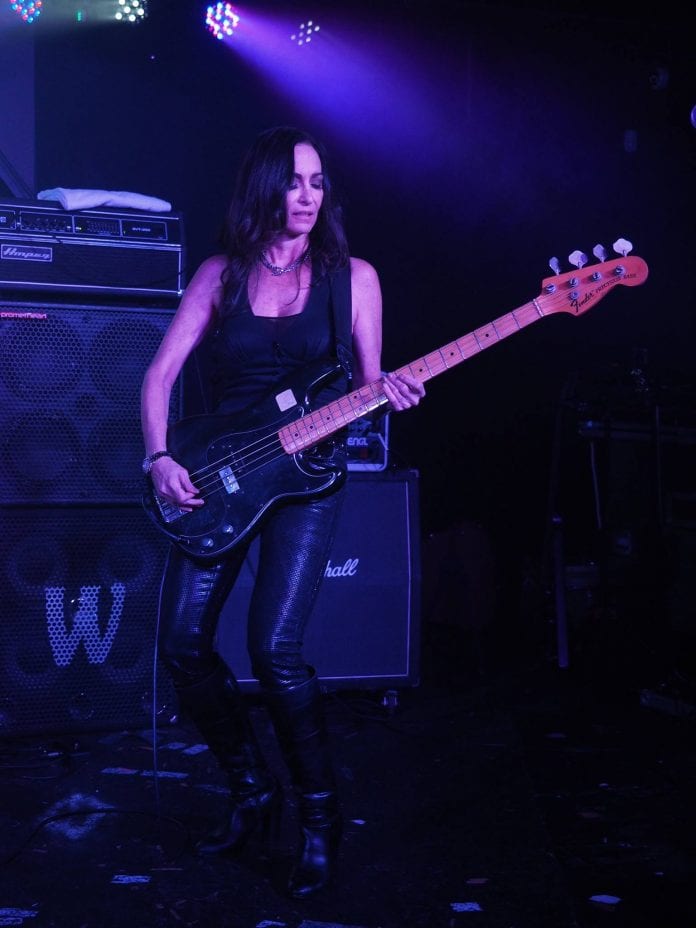 You could say playing bass for iconic rock singer Graham Bonnet is a work-in-progress for Beth-Ami Heavenstone. “I’ll be learning Graham’s back catalog until I die,” she jokes about navigating the undertow of Rainbow, Alcatrazz, The Michael Schenker Group and Bonnet’s solo work.

She’s in good company: Graham Bonnet’s been surrounded with talented musicians and writers for a long time from Yngwie Malmsteen and Steve Vai to Russ Ballard. The vocalist is probably most known for Rainbow’s Down to Earth album including songs “Since You’ve Been Gone” and “All Night Long.” In his current lineup, Heavenstone brings her passion and well-rounded skills along for the ride.

Lately, she’s developed an appreciation for bass parts that “beautifully support a song” along with more ornate lines. “It’s fun playing all his material because his former bass players have such varying styles,” she shares. “I love the challenge of tackling his old songs—they’re new to me!”

The mother of two is also tour coordinator for the band that she’s been playing and writing with for a few years. On the horizon are more overseas festivals and a live album and video entitled Live…Here Comes The Night. Other music includes the EP My Kingdom Come and the full-length album The Book; both have creative bass-lines and Heavenstone’s commanding attack.

Originally from Philadelphia, she headed west eventually sharing bills with popular metal bands in the 80s and 90s. She calls her “carefree” days on the Sunset Strip with her first band Bootleg; then joining the Hollywood outfit Hardly Dangerous (fronted by singer Tomi Rai Brown, James Brown’s ex-wife).

Along the way she developed a dependable blues/rock foundation and a love for the solid body and tone of the P-Bass—a ’74 and ’83 are her reliable duo for stage and studio.

She always loved the sound of the bass: “It’s what my ear intuits when I listen to music.” With her natural ear for the low-end, and a discarded four-string, she found her destiny…

How did you learn how to play bass?

It happened accidentally. I had never intended to be a bass player but when my longtime boyfriend moved out, he left a bass behind. I started messing around with it and I thought “hey, I can do this!” Ironically, it was a right-handed bass and I’m left handed.

Were you drawn to songs for their bass sound?

Did you have a bass lesson from John Entwistle? How did that happen?

I don’t remember whom introduced us, but I did have a bass lesson from John Entwistle (the Who). It was wasted on me because I was an absolute novice at the time. He also had a sort of mumbling style of speech and I found myself saying “pardon” constantly. He was a lovely man and I would have done anything to have had that opportunity again after I knew what I was doing.

What basses do you prefer playing?

I have nine basses but strictly use Fender Precisions on tour and for recording. My main bass is a 1974 and my back up is a 1983. Both play beautifully.

Do you play solely with a pick, or do you play fingerstyle at all?

I accidentally cut off the tip of my middle finger on my right hand and it tingles when I play bass with my fingers, so I play exclusively with a pick.

Really? How did this happen? How did you overcome it?

I cut off the tip of my finger when I was sliding one side of a medicine cabinet open and the other side was broken in the corner and took the tip of my finger right off (God, that sucked). I went to the emergency room but they were packed that night so I put the tip back on tightly with bandages. It grafted back on but there’s a scar on the tip that feels a bit numb. When I tried to play with my fingers, the sensation was tingly and numb. I just never went back to it.

As far as creating songs, do you come up with bass parts and then get together with the band and develop songs?

Definitely not. The bass lines in this band are purely to support the rest of the music. Graham is actually a great bass player and he loves to write these amazing cello like bass lines for me but they’re too good and we end up having to dumb the bass lines down to feature the other instruments. I used to have difficulty with the Alcatrazz material because the bass lines were almost too simple but I’ve come to understand the depth of their simplicity and how beautifully they support their songs.

Seems like you and Graham have a strong creative energy. What was the songwriting process for The Book; or just working with him in general?

Graham is constantly creating. I’m his biggest fan. There are songs on The Book that he started writing more than twenty years ago that came alive when he collaborated with the band. The usual process is that Graham comes up with an idea and presents it to the band and it just grows from there.

How did you approach learning Graham’s songs and playing them live?

Great question! I was so fortunate when we first put the band together to discover that there were instrumental versions of the Down To Earth album on YouTube. Graham’s voice was very distracting and those videos were a God send. The MSG stuff was a bit tougher. Chris Glen is a very ornate player. He also has huge hands and I don’t think I could play like him if I tried.

That album’s a classic. I especially like the bass part in “All Night Long.”

I love it. I’m a big Roger Glover fan now that I’ve had to learn the Down to Earth album. I think he’s very underrated. He’s got a very sexy style and really grooves.

You handle a lot of backing vocals in the band, too…

I sing on most of our set and sometimes it’s brutal. If a bass line is even mildly syncopated, I start singing the bass line instead of the melody.

Live, do you mix it up including songs from Bonnet’s previous bands and new material? Like Alcatrazz songs…

He has such a vast body of work. It’s fun playing all his past material because his former bass players have such varying styles and I love the challenge of tackling his old songs…they’re new to me!

Do you use different phrasing or improvise a bit live?

Yes. I don’t think some of the original bass players would even play them the same way they recorded them.

One of my favorites of your new material is the EP My Kingdom Come, nice attack on the title track. It’s heavy, but has interesting time signatures. “The Mirror Lies” is a bit more grooving. Is that you singing backing vocals?

I love “My Kingdom Come,” Russ Ballard wrote it and that guy is genius. Yes, the bass line was a bear! And I love “The Mirror Lies.” It’s my favorite lead of Conrado’s (guitarist Conrado Pestinato). It’s also one of Graham’s favorites but hasn’t been in the set for a while because we’ve had to play songs from our recent album The Book in addition to Graham’s past hits. I sing the chorus live, but can’t remember if I sang on the recording. It’s been a while.

I read that you went out to Hollywood early in your career. What was the first band you joined? Must have been fun times on the Sunset Strip…

My first band was called Bootleg. Yes, the strip back in those days was incredibly fun. Those days were so carefree. I feel privileged to have been present. I got to see and share bills with some of the greatest hair metal bands.

Where are you from originally?

I was born in Philly, grew up in Cherry Hill, then moved back to Philly before moving to NYC, London and back to NYC. I go back to Philly every now and then, my brother still has a house on Long Beach Island where I spent every summer of my life.

What’s going on with your long-time band Hardly Dangerous?

Other than a reunion show last year, I haven’t played with HD in 3 years. I love Tomi Rae but I don’t have time to do any projects other than GBB. I wouldn’t say no to any reunion shows though.

What else are you up to musically?

I have no time for anything else musically. I don’t know if I mentioned this but in addition to playing bass in the band, I work with management and do all the tour coordination. I am also the mother of two kids, both special needs. I wasn’t home for more than three weeks at a time this past year. I spend every spare minute with my kids.

Is it challenging being a touring musician and a Mom? Do you have any advice for other parents in this business?

It is sooooo challenging. I always feel panicked a few days before a tour starts knowing that I’m leaving them; and about four days into a tour, I start intensely missing them. Thank goodness for FaceTime so we get to see each other every day. My ex-husband is one of my best friends and has been so great about taking care of things when I leave for tour. I have no real advice for other touring parents other than to try to connect with your kids every day.

For pedals and effects Beth-Ami uses a Truetone overdrive/compression pedal and a Whammy DT. She says: “We have multiple tunings and I can’t drag three basses on tour.”

Guitar straps that suit her: “I bought a mono strap after NAMM, but haven’t put it on yet. I currently use Planet Waves because they have built-in strap locks.”

Connect with Beth-Ami and the Graham Bonnet Band: