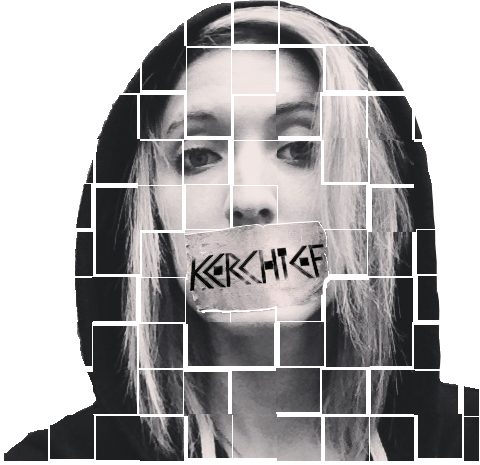 Indie-rock artist and guitarist Britt Hill, formerly with the all-girl band Vanity Theft with whom she experienced a seven year career, is now solo and goes by the moniker Kerchief and is the front person of an indie rock trio made up of band members Britt, Jarrod and Catt. Originally from Dayton, Ohio, Hill relocated to Chattanooga and released her debut solo album Machines and Animals this past summer, working with producer Matty Amendola and the Grammy Award winning engineer Butch Jones.

Kerchief describes in her bio, “From the writing process to pre-production, to the recording process with producer Matty Amendola, to the finished product, I feel that the songs became fully realized,” said Hill. “I never had to bite my tongue. The songs were written from a raw emotional place, experimented with in the studio and brought to their full potential with Matty in Brooklyn, NY. This is the best thing I’ve done to date.”

The sophomore single from the release “Jack London” received a great deal of attention from indie rock critics across the country, as well as “Milk and Honey.”

Following a recent tour, I had a chance to catch up with Hill and learn a little more about Kerchief, her influences, guitars, and favorite music.

GGM:  How would you describe your sound to people who haven’t heard your music?

GGM:  Who are your influences?

GGM:  Is there a musician or artist that you would be your dream collaboration?

Britt:  We have a short tour planned for December to end the year on a good note. We’ll definitely be touring more extensively in the spring, and doing more writing next year. Very excited about both of those things.

GGM:  Is there a band that you want to see play live that you haven’t seen before?

Britt:  The Strokes are at the top of my list for favorite bands I haven’t seen live yet. My band and I just bought Speedy Ortiz tickets for December in Nashville, so I’m excited to mark that one off my list soon.

GGM:  What kind on guitar do you play?

GGM:  How long have you been playing your instruments?

Britt:  I started learning guitar about 10 years ago in middle school.

GGM:  What kind of energy do you get from the crowd or is there a particular energy you look for?

GGM:  What is your favorite song and who is it by?

Britt:  A lot of my favorite songs are by Death Cab For Cutie. If I had to pick one, it’d be “Transatlanticism.”

GGM:  Where do you see yourselves in 10 years?

Britt:  Touring in Europe with 4 or 5 albums under our belt.

A big shout out to Britt on her new work as Kerchief is definitely a band to watch in 2016.

“Machines and Animals” offers tracks that expertly weave Hill’s smooth voice with the edge of her songwriting and lyrics. Guitar riffs bite into bass lines that ebb and flow with emotional vocals, taking inspiration from a personal journey. Heavy drum beats and layered guitars articulate the feelings behind stories of the pursuit of finding purpose in life’s daily struggles, reflecting an evident influence from ‘90s alternative rock.