Home Interviews Interview with Lights: It’s been a life long dream to make a... 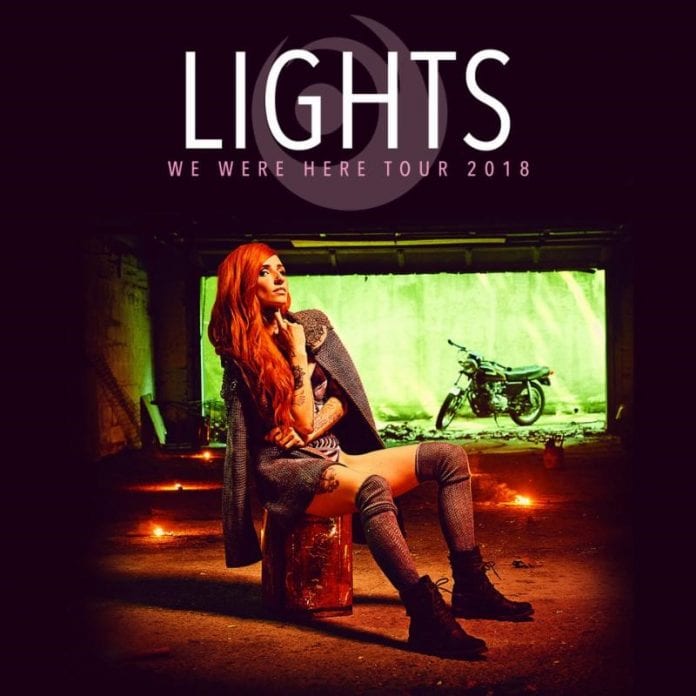 After a long while of hard work and dedication, singer-songwriter Lights has finally released her Album/Comic duo, Skin&Earth. With a firecracker character and a story line to match, this album has taken the pop scene by storm!

With her album teaser video earning 55k views, we could’ve only imagined the projection for her release. As predicted, her song “Skydiving” received over 990k views on YouTube, not to mention her song “Giants,” which received a whopping 1.4 million views!

Fortunately, we were able to interview this wonderfully ingenuitive artist!

Previous to the interview, we reviewed her album, which you can view and get a good look into what makes the songs tick.

Hello! My name is Morgan Jones. I am a writer under the Guitar Girl Magazine. Before I begin the interview questions, I would like to take a second and personally thank you, Lights, (and your team) for your incredibly unique contribution to the music community. I have been a fan since The Listening and have loved loved loved your music ever since!! Okay, fan girl moment over.

This is so cool to read, thank you for these kind words!! So happy to be doing this with you!

First, I would like to say that I am extremely impressed at the fact that you are illustrating your own comic alongside your album. What exactly was your inspiration for this endeavor?

It’s been a life long dream of mine to create a comic, and a compounded dream to make a comic that goes with an album. One day it hit me, why the hell haven’t I done it yet? I just had to sit down, learn how to do it, and put in the time. I’ve watched my dreams come true with this project.

I have put so much of myself into the main character. In fact, there is a little bit of me in all of the characters, but En, the lead, is definitely me in another body. She responds and reacts the way that I do, we even have the same hair. She is imperfect and goofy, and I think that’s what I always want out of a relatable lead character.

In comparison to previous albums, what stylistic changes have you actively taken to set Skin&Earth apart?

Skin&Earth is a lot more soulful and sexy than anything I’ve ever done. I really found my rhythm and confidence and path as a woman and a creator and I think that impacted what you hear on the record.

A favourite for me is “Fight Club.” I’d always wanted to write about fighting, bickering; not physical, but the necessity of having a good argument in a relationship. You can’t bottle sh*t up; you have to weather the storm together to get to the other side sometimes.

What exactly does Skin&Earth mean to you as a whole, and what message are you seeking to put out with the album?

Though it may not be immediately evident, the core concept of the story is the confrontation of depression and inner darkness, things I’ve dealt with in my past and even current life. The idea that you don’t have to be brave or right all of the time to be strong, and in fact there is beauty in the struggle. Sometimes your darkness can become your light.

You just wrapped touring with PVRIS. How excited were you to cross the country with them?

It was an awesome tour and was so good to get back out there playing new songs and shows after taking essentially 15 months off to make the comic. I just announced my headliner and I couldn’t be more excited.