Home Interviews Interview of Christina Rubino on Inspirations, Guitars, and a Positive Outlook 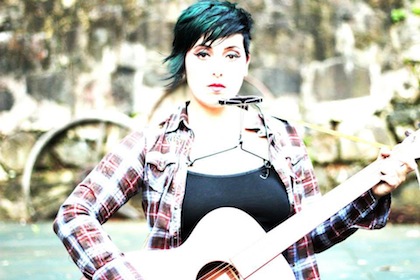 Brooklyn native and musician Christina Rubino has recently released her first full-length solo album. It is an unusual album that ‘tells the story of a gifted artist who got lost trying to find herself and only found herself when she was lost.’

As a teenager, when Christina heard Janis Joplin sing the chorus to ‘Piece of my Heart’ she knew that music was what she wanted to do for the rest of her life and went on the bus to buy a basic nylon string classical guitar.

Following great musical accolades including joining NYC based Depeche Mode cover band ‘Violater,’ Christina unfortunately encountered a hailstorm of personal problems resulting from severe alcohol abuse and took a hiatus in 2009 from recording and playing live music in order to get clean. Here is her exclusive interview for Guitar Girl Magazine:

GGM:   You have been compared to a variety of singers including Linda Perry and Johnny Cash. What is your reaction to these comparisons?

CR:  I am extremely flattered, shocked, and of course humbled by comparisons like this. I, in no way, consider myself to be in league with song-writing titans such as these named. Therefore it makes me want to work harder and hone my craft. Maybe one day I will be able to shine their Martins!

CR:  Clearly the women who first inspired me to play have impacted me tremendously – My sister Toni, Joan Jett, Janis, Ani, Stevie – there are many, and I would never have had the confidence to even try if they hadn’t already blazed the path. There have been so many artists who have impacted my along the way – Sam Cooke, the Ramones, Tom Waits, Sinead, Social D, Etta James, Beth Hart, the Cure, Dylan, Cash, Rancid, Cat Stevens, Fleetwood Mac, Pink Floyd, Simon &Garfunkle – and those are just the classics. I love discovering new music and I connect with honest artists. If there is honesty in music, I am all IN. What is playing on my iPod right now happens to be The Milk Carton Kids. I don’t care what genre of music it is, if it is real and well written, then it will likely speak to me. There is something divine and divinely human that manifests when you are listening to the works of a true and honest artist playing music.

GGM:  Is there a particular venue you would love to perform at?

CR:  Not really! Performing for me today is more about the individuals listening. Connecting with the spirit of a person. I like small, intimate shows, and any venue, providing it has a PA, is fine with me.

GGM:  How many guitars do you own and can you play any other musical instruments?

CR:  I am the proud owner of a 1985 Gibson semi-hollow ES-335, with a totally pimped-out pink fur interior, leather brown hard case. That is my electric pride and joy. I recently sold my Les Paul studio. I also play a Martin 000-15 standard 6 string and a Takemine 12 string. I had a beautiful Guild F-series 12 string, but a tragic accident involving a boom stand and a bar stool destroyed the whole body – it hurts even thinking about that! I have a nice resonator as well, good for playing leads in living rooms when you need to cut through without amplification. I also own a uke, mandolin and a banjo, because they are fun. I played all the banjo parts on my album, and am having fun learning the instrument. And last but not least, I have a TON of harmonicas!

GGM:  Do you have any other hobbies or interests in additional to music?

CR:  I am a painter and a designer as well, that is what I went to school for. I also dabble in some front end web development. I LOVE reading and hope to try my hand at writing one day. I can lose myself utterly in a good novel. A great app for people to check out is Wattpad. It’s where unpublished writers share their work and you wouldn’t believe the talent out there. I also love cooking and gardening. I occasionally head to the shooting range, too!

GGM:  Is there anyone you would particularly like to be paired with musically on the Pandora ‘music genome project?’

CR:  I would like to be paired with any of my musical influences I mentioned earlier, however, from what I observe, the genome project is insanely complex. So far I have discovered amazing artists on my own station, so I am extremely happy with whom I have been paired with thus far.

GGM:  You have been through so much, but have come out the other side with an inspiring, positive outlook. Do you have a particular message you would like to share with your fans?

CR:  Yes. When you see the truth, accept it. If you need help, ask for it. Don’t ever believe the lie that life sucks. It doesn’t – if we think that, it means we suck – so if we suck, we have to change.

GGM:  Has recording the deep ‘A-live From The Scrapheap’ album been musically therapeutic to you?

CR:  Writing it was more than therapeutic, it literally saved my life! There were times where I literally opted to try and write a song rather than do something incredibly stupid. “Waiting to Break” was definitely one of those songs. Recording the album was fun, challenging and well worth it! I am happy to now move on artistically to see what lies beyond all of that pain!

GGM:  Can we look forward to more of your music in the near future; are you planning any more tour dates?

CR:  Absolutely, the next EP is almost fully written! Tour dates are rough right now, because I have a lot of responsibility at home with some elderly family among other things. Leaving for stretches of time is a challenge. I am playing locally now, with shows coming up this July and Fall, which includes a folk festival here in NY for which I am super excited to play!

For more on Christina Rubino and her music, visit her site HERE.