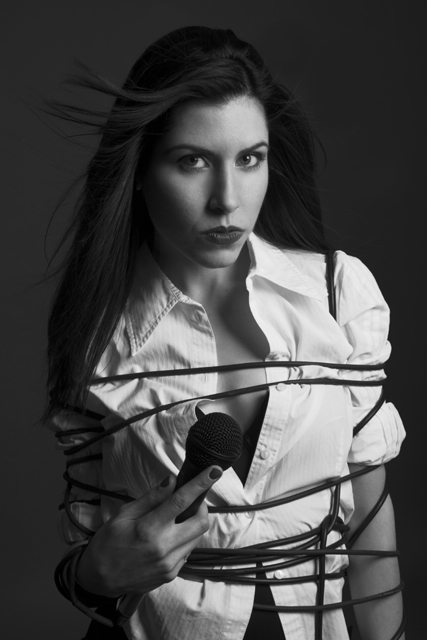 Canadian musician, writer, and CEO front-woman of her own record label and publicity firm, Rose Cora Perry is not stopping anytime soon. She’s just getting started. Her first solo release came in 2010, Off of The Pages, and most recently, in 2016, released her sophomore album, Onto the Floor. Aside from creating music, Perry is a photography model, web designer & social media specialist, including print journalism and broadcasting. Rose chatted with Guitar Girl Magazine about her achievements in her exciting endeavors, her music video trilogy accompanying her sophomore album, and being vegan. Find out more about this chameleon of an artist!

You’ve recently released your sophomore solo album, Onto the Floor. How was that experience?

Well, I will certainly say the music industry has changed tremendously since my last release in 2010. Heck it changes each month, let alone when there has been a time-lapse of a few years between albums. It goes without saying we live in times of constant flux and new technologies anymore. If I’ve learned anything from my years working within the entertainment industry, it’s that it’s important to try and keep apprised of what the biz (and one’s competition) is doing.

With that said, I’m REALLY happy I took my time to let the album evolve and I’ve been getting a tremendous response. In fact, for the first time in my career, I’ve achieved commercial radio play on mainstream formats like “Adult Contemporary” and “Alternative Rock,” my music video trilogy series has won awards, and the live duo I formed for the purposes of touring with my new material, “The Truth Untold,” tackled 15 major summer festivals last year, performing to audiences of over 25,000…not bad for a “comeback” so to speak after a six year hiatus.

BUT there is a preface to all of this in that I worked myself (and continue to work myself) silly – oftentimes into the wee hours of the morning – while juggling the responsibilities of my “Clark Kent” identity. It’s never been easy and it never will be. If you want something, you need to be hungry for it.

I suppose the biggest difference between my last release and this one is the role that social media and internet-based marketing have played. Both tactics have opened up the doors for a global audience and global marketplace which has allowed for greater potential reach BUT also greater potential competition. Accordingly, if it was difficult before, NOW you have to work that much harder to have a voice, be seen and be heard. I’m thankful for the amazing support I’ve received along the way but the journey of this new release has only just begun!

You also released a music video trilogy series, based on real events from your own life. Where did the idea come from for this?

As mentioned, the last time I released an album was in 2010 and A LOT has changed since then. I wanted to be sure to give my new album – an album I feel is my best work to date – its best chance. Accordingly, I spent a great deal of time and energy early last year researching the marketing efforts of my contemporaries.

Based on my observations, it became clear to me that the new “model” of music marketing emphasizes two things above all else: 1) social media, and 2) music videos.

When my duo formed early last year (Jan 2016), some of the first rejection letters we received from bookers cited that we needed to have current music videos available on YouTube in order to be considered for potential gigs, which only served to reaffirm my “findings”.

So, in a nutshell, the idea for the trilogy series came down to strategy. I specifically chose three songs representative of me as an artist BUT also different enough genre-wise to be marketed toward different demographics and different radio station formats. Given the emphasis placed on music videos these days (especially when it comes to securing important gig opportunities), it only made sense to release videos for all three singles.

Why I chose to tie the songs/videos together? Well, the lyrics naturally lend themselves to this given the subject matter (please do listen to my words) and I also thought it’d be an excellent way to engage potential audiences – making them crave more.

In an age where Netflix binging is all the rage, there’s nothing quite like a good cliffhanger. So why not apply the same formula to a series of Music Videos inspired by a tragic tale of romance, betrayal and the music biz from my own life? Not to mention, it’s also a great way to make a deeper more personal connection with my audience – given that now they “know” a true part of my life story and why I write the music I do 🙂

You have quite a resume of music and personal achievements. What is your most fond memory from these accolades?

You became vegan in 2009. Why then, why is being vegan important to you and your creativity?

2009 marked the end of a near-decade long romantic/professional relationship I had with my former songwriting partner which left me, for lack of a better word, in shambles. Our whole lives were intertwined and when we parted ways not-so-amicably I was lost as a person and an artist. Becoming vegan (as well as releasing my two solo albums) has been a key part of the process of me discovering who I am and who I want to be…without HIM (get the reference?) 😉

After experiencing health issues which seemed to become exacerbated when I consumed animal products, I slowly started to cut out red meat and dairy. I began to feel better. I then chose to cut out poultry and fish products. And again my health improved. As I continued on my wellness journey, I was introduced to various documentaries and books on veganism which reinforced further from an environmental stance that I was making the right decision – not just for me but for the greater planet.

As a former diehard carnivore, believe me, I’m the least likely candidate to become vegan, but I tell you now with certainty, I will never go back. It’s been one of the most positive life decisions I’ve ever made and has had a litany of positive affects on my life.

In terms of how it affected (and continues to affect my creativity), well I’ve proudly served as the official Emcee for my local chapter of the VegFest festival movement since its inception, and last year, my duo had the amazing opportunity to perform at the Toronto Vegan Food and Drink Festival.

While I have yet to pen my sure-to-be hit single, “Ode to Tofu,” I will say it’s been wonderful connecting with fellow plant-powered peeps including my drummer, Tyler Randall.

You’re performing several dates where you’re based, in Canada, and a date in Pittsburgh. Have any plans to expand a US tour?

It’s still SUPER early in the festival booking season so our tour dates for this year are not yet complete. We’ve definitely put out feelers for more US dates and are hopeful that we’ll be able to bring some rock ’n’ roll to our friends in the South.

I had the privilege of touring across the US with my former band Anti-Hero and performed select US dates with my last release. I’m hoping we’ll be able to do the same in promotion of, “Onto the Floor.”