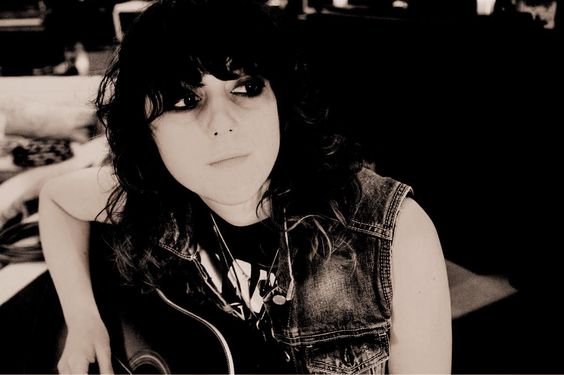 As the summer of 2014 was coming to a close, the 8th and final episode of VH1‘s “Make or Break: The Linda Perry Project” came right down to two female singer-guitarists, from whom Linda would select one to produce an album: Anjuli Gonzalez, a.k.a. Anjuli Stars, out of Miami, and Candice Martello, a.k.a. Hemming, out of Philadelphia.

At first, Linda chose Anjuli, but no sooner did Candice congratulate Anjuli on her win, than Linda decided that Candice was also worthy, resulting in two co-winners. Needless to say, Candice was very surprised, but one might as well think of her earning the opportunity to work with one of music’s most well-known creative geniuses as the result of an investment in time and effort.

Candice grew up around a  musically-oriented family, and first learned guitar at the age of nine; she would begin writing her own songs four years after. After graduating from Philadelphia’s Drexel University, Candice stepped up her pursuit of musical stardom, playing throughout the west side of Philly, both solo and as one-half of a male-female punk band called Omar, alongside Nick Fanelli.

Omar were introduced during “Make or Break’s” third episode, but, as we caught up with Candice while she’s been on the road opening for Rachael Yamagata, we asked how some advice from Linda resulted in a dramatic moment that helped improve Candice’s chances.

We’ll also find out from Candice how Linda played a part in coming up with the name Hemming, plus other topics like how her current tour has been going, as well as her thoughts on some of the other artists she went up against during “Make or Break.”

GGM:  First, Candice, congratulations to you for being one of the two co-winners on “Make or Break: The Linda Perry Project.” During your tour with Rachael Yamagata thus far, have you had fans come to you who said that they saw you on Linda’s show, and offered similar congratulations?

Candice: So far just a few, people are mostly coming up to me to say they liked my set, which in my opinion, is even more flattering and appreciated.

GGM:  Is your tour with Rachael your first extensive tour, regionally or nationally, or have you toured this extensively in the past?

Candice: This is definitely the biggest tour I’ve ever been on; a majority of the places we are going, I’ve never even been to. It’s very exciting for me, like an epic road trip where I get to do what I love every night.

GGM:  Linda has said that part of the idea behind her Project had to do with the passion and emotion that has been missing in the music industry. Given your experience on that show, do you think it more than helped bring out your creativity in a way that “Idol” or “The Voice” didn’t?

Candice: I feel like you can’t compare Linda’s Project to things like “Idol” or “The Voice;” they are different spectrums of the industry. Linda’s show was focused on songwriting, emotion, studio recording and overcoming insecurities. While it definitely takes a lot of guts to do something like “Idol” or “The Voice,” they are not singing their own songs or actually getting a feel for what is actually involved in being a recording artist.

GGM:  The way you were introduced on episode 3, when you and your now-former colleague Nick were busking near the Hollywood & Vine intersection, leads me to ask … what kind of impact have street performances had on your musical career?

Candice: I don’t know if they’ve had any sort of severe impact on my musical career, I respect buskers and always stop to listen to them. I feel more comfortable performing in a place people are knowingly going to listen to music.

GGM:  When Linda told you that you were better off solo than as one-half of a duo, as dramatic as that moment was, would you consider it the proverbial “turning point” that gave you enough strength and confidence to help you win?

Candice: It was definitely a turning point, I had Linda Perry telling me that I write great songs and that’s a huge compliment. Part of me also relied heavily on Nick, and Linda could tell I was using him as a crutch. I felt like I came into my own when I was forced to continue on alone.

GGM:  What is your opinion of your fellow co-winner Anjuli, as well as of some of the other artists you were up against?

Candice: I love Anjuli, I was convinced she was going to be the sole winner. She writes very powerful and meaningful lyrics, which is something I personally struggle to find in today’s mainstream rap music. Aimee is also an amazing talent, we’ve been sending each other song ideas back and forth and she’s got some really great stuff in the works. I also think Gabriel is an excellent songwriter, I feel like he can write a song about anything and has a rambling, Bob Dylan style.

GGM:  On to a few questions about your music, Candice, starting with one that I usually ask of my interviewees:  When and where did your first professional live performance take place?

Candice: I could not tell you when and where the first one was honestly because it all gets mixed together with all the other bands I’ve been in. I’ve done a few shows at The Fire in Philadelphia and also one at Boot and Saddle – those are some pro venues that were fun to play.

GGM:  Have you had any good or bad moments while playing on stage or, for that matter, on the streets?

Candice: Everything is always such a blur when I’m on stage, there have been a couple times I’ve broken strings and forgotten words to my own songs, but I have learned to just keep going and not act phased by it. I don’t play the streets ever; it’s not really my thing.

GGM:  How influential have [multi-genre singer-guitarist] Cat Power and Metric [Toronto band fronted by Emily Haines] been on your musical brand?

Candice: Very influential. I think they are both very strong lyricists who write with raw emotion. I really appreciate the simplicity of certain songs; if it’s written well it can only have three chords the whole time and still be captivating. I feel like Cat Power and Metric both do that very well and I myself have tried to write that way.

GGM:  Of the guitars that you have owned or currently own, are there one or more that stand out as particular favorites?

Candice: I haven’t owned a ton of guitars; I’m actually in the market for a new one. As much as I love my Gibson SG, it made more sense when I was in a punk band. When we were recording the album, I always gravitated towards the Gibson J45 acoustic in the studio, but I think it was from the ’70s and like $10,000, so I don’t think I’ll be getting that one.

GGM:  How did you come up with the name Hemming?

Candice: Linda actually came up with it. We had been throwing around names for weeks and one day she was like “I’ve got it!” It’s surprisingly hard to give yourself a band name; I kept describing it like coming up with a forehead tattoo because it’s so public and permanent.

GGM:  Where was the video for your song “Hard On Myself” shot at?

Candice: All around L.A.  It was the first time Nick and I were together hanging out in L.A. since we filmed the show, so we went around and did a bunch of touristy stuff; he filmed the whole thing.

GGM:  My last question, Candice, is about the prize you won. Are you looking forward to working with Linda Perry on production of your debut album, and would you consider her a “mentor” regardless of how successful your album will be?

Candice: I would consider her a mentor, yes; It’s really amazing to watch her work in the studio and come up with ideas. I hope to one day be as fluid as her with songwriting. The most important thing is that I trust her. I trust that she knows how important these songs are to me and she understands the style I’m going for.

During the course of her tour as the opener for Rachael Yamagata, Hemming has been performing with a Gretsch G5422TDCG Electromatic Hollow Body guitar. And with that tour already concluding, I wouldn’t be surprised if she does just as extensive a tour next year, after she releases her Linda Perry-produced album.

As previously mentioned on this site [https://www.guitargirlmag.com/news/hemming-releases-her-debut-single-vitamins-via-custard-records], Hemming has come out with a single entitled “Vitamins,” on Linda’s Custard Music label, which recently peaked at number 23 on Billboard’s “Trending 140” chart, and at number 13 on Billboard’s “Emerging Artist Trending 40.”

“Vitamins” is available on iTunes at https://itunes.apple.com/us/album/vitamins-single/id9341646, as well as on Soundcloud at https://soundcloud.com/hemming-music/vitamins and on Amazon at http://www.amazon.com/Vitamins-Hemming/dp/B00OYKOUOY/.

Another track by Hemming, “Hard on Myself,” is also on iTunes as part of the EP for “Make or Break: The Linda Perry Project,” also on the Custard label, at https://itunes.apple.com/us/album/hard-on-myself/id912431580

Jan Smith: “Mama Jan” helping change the world one voice at a time