Home Interviews Interview with Leanne Kingwell on her new music, writing, and her passion... 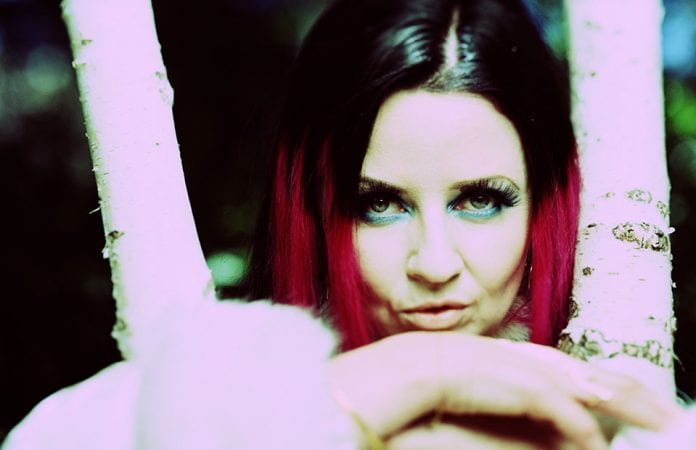 Leanne Kingwell, singer, songwriter and guitarist from Melbourne, Australia, released her album Choking on Halos last year to rave reviews. The album was entirely self-funded by the Aussie rocker so that she could retain her “creative autonomy.”  After two years of hard work traveling between Australia and the US, writing and rewriting, and working with Producer David J. Holman (No Doubt and Bush) at his Cactus Studios in Hollywood Hills, her second solo album was finally done.

Having bought her first guitar in high school and forming her first band while attending  college to obtain a degree in graphic arts, Leanne worked hard performing gigs, writing songs, breaking barriers, and was given the title of “the queen of Aussie Rock.”

Not only is Leanne passionate about music, she also has a soft spot for animals and is involved in several animal rescue programs.

We were fortunate to be able to learn more about Leanne, her music, and her passions.

GGM:  For those who have never heard your music how would you describe it?

LK:  My first solo album, Show Ya What, was straight up beer and chicken wire roots rock ‘n’ roll that got me great reviews and gigs because I was a chick kicking butt in what had been, in Australia at least, a predominantly male domain. When I decided to go to ground to write and demo my second album, I was coming off a stadium gig and the press were lauding me as the ‘Queen of Aussie Rock.’ It may have been in my best interests to deliver something in the same vein, but the more I got into it, the more I was feeling ‘been there-done that.’ As an artist I knew I needed to evolve creatively, how and into what was still for me to discover.

I took a long time out to experiment, to write, make, and reject demos. I got hands on in terms of driving the software to conjure, conceive and visualize my new songs. So before I even started the actual album recording process, I’d well and truly embedded my own DNA, design, depth and dimension at songwriting-demo stage, rather than trying to find it in the studio. I wanted to create an honest cohesive musical journey, in the spirit of the amazing albums that inspired me to make music in the first place. Phew!

So, back to your question, what does my new album, Choking On Halos, sound like?

Reviewers have called it, “Renegade Vogue,” and a “Rousing sonic mind-trip,” and “a breath of fresh air.” As far as I’m concerned, it’s simply the best Leanne Kingwell I can currently be.

LK:  My current single is called, “Sunshine.” It’s a get-on-your-feet upbeat ode to love, sex and yearning. I wrote it for my cat.

My current album is, Choking On Halos, which is my conflict resolution word-picture for the hypocrisy of blindly assuming that your take on things is the only valid one. Wars are caused by intransigently right-minded leaders, folks.

LK:  David Bowie. Especially his Hunky Dory through to Diamond Dogs era in the ‘70s. When I’m bunkered down writing songs, I don’t listen to other artists though. It tends to distract me from discovering my personal lyric runs and music.

GGM:  Where do you see yourself in 10 years? Musically/ Professionally?

LK:  Ummmm… wow… I’ll be 107 years old by then and even more opinionated than I am now! I’m not much for forward projection because it tends to narrow my focus. Suffice to say that I’ll still be making my own brand of music until it kills me, because it’s much more interesting inner-self exploration than clinical therapy.

GGM:  Will you be going on tour soon? In the US, Europe, Australia?

LK:  International touring is expensive, especially for an independent solo artist like me.

I had a killer studio band on Halos. Sean Hennessy (Candlebox, The Gracious Few), Trev Lukather (son of Toto’s Steve Lukather), Eric Gardner (Gnarls Barkley, The Motels, Morrisey, Moby), and Jerry Roe (The Fray, KT Tunstall, Emmy Lou Harris, KD Lang). Assembling a bunch of players for an overseas tour at my studio band’s level is way beyond my credit limits. Besides, I’ve always been of the view that gigging cuts into your songwriting time and I tend to prioritize the latter.

I just did a very special headline gig in my hometown of St. Kilda on November 13 to help raise funds for the St. Kilda Gatehouse, an outfit dedicated to the care and protection of local women sex workers. The event featured an incredible line-up of the very best comedians Australia has to offer and I closed the night with a 30 minute set. My kinda gig for sure.

GGM:  What is the #Thisisme , #Otherpeoplesshoes project? Where did the idea come from?

LK:  I created the #THISisme #OtherPeoplesShoes project as a visual adjunct to the conflict resolution sentiments I had expressed in the title track of my “Choking On Halos” album.

I firmly believe that a lack of empathy creates the inter-personal and international violence we’re subjected to. I wanted to visually express that every stranger we see in the street, or on the six o’clock news is someone important, a mother, brother, sister, father, aunt, uncle, son, daughter, friend, worthy of respect, kindness and consideration. Metaphorically, at least, I wanted to impart that we should all take a walk in other people’s shoes to gain the understanding and empathy that could stop the violence.

I spent days in and around Melbourne, shooting strangers shoes. By excluding any further detail, potentially any pair of shoes on screen could be you or me, perhaps someone we care about or someone we’ve been media indoctrinated into fearing or hating.

What my Other Peoples Shoes short film showed was that even though people all headed in different directions, it was possible to co-exist in the world. The divergent shoes of thousands of people on the public streets and walkways of a big city got to where they were going without crash or clash.

“You can’t stand still, thinking you’re right,
when everybody just wants to stay alive.
And you can’t believe we should all get along,
then turn around and say that the other side’s wrong.
We’re all just pieces of God, Choking On Halos.
We’re all just here to learn whatever we don’t already know.”

We are one and one is all. Peace.

GGM:  What other projects are you working on presently?

I’m giving away downloads of my “Sunshine” single and Choking On Halos album, as well as the chance for social media shout outs or to have your pet’s name and photo featured in a video for “Sunshine.” 100% of the funds raised will go directly to the respective organisations.

Saving lives and putting smiles on furry faces R us!

GGM:  How did you get involved in the animal rescue projects?

LK:  A few years ago I discovered an Animal Rescue charity on Facebook called Gunyah Animal Healing Sanctuary. I fell in love online with the furry faced residents and their back stories and admired the woman, Kathy Munslow, who single-handedly took it upon herself to save these beautiful, unfortunate critters – placing value on every life fortunate to enough to find its way to her gates.

I started donating a small amount monthly. I could see online how Kathy was struggling to meet expenses when the animals fell ill or needed special treatment and increased my donation several times until I reached the limit of what I could realistically commit to per month. At which point I messaged Kathy and offered her free use of my music for her promotional videos, hoping that might help some more.

The sanctuary is not open to the public, because Kathy has her hands and schedule completely full just caring for all its residents, but when Kathy received my message she suggested I come out and visit. Kathy Munslow and myself have been firm friends and fundraisers ever since.

GGM:  How is it different musically going out on your own and not in a band?

LK:  No band would put up with my present day musical methodology. Being a solo artist means that my inner control freak only yells at me. I can handle that!

GGM:  Do you have any advice for up and coming artists?

LK:  Don’t be afraid to make mistakes. Don’t try to be fashionable. Find your truths and tell them through your music. And don’t even set a single foot on this path unless you’re 100% committed and prepared to fight to the death to defend for your right to rock.

GGM:  What’s next for Leanne Kingwell?

LK:  Digging around the back corners of my psyche, looking for feelings to examine and resolve while writing songs for the next record. Helping make the world a better place for animals, of course. Finding the space to make the trip to Gunyah Animal Healing Sanctuary more often where I’ll be the crazy chanteuse chasing alpacas, ponies, pigs, calves, sheep and horses through the green grass of Gunyah, arms flung wide and yelling “Furry Cuddles!”

For more on Leanne Kingwell, visit her site HERE.