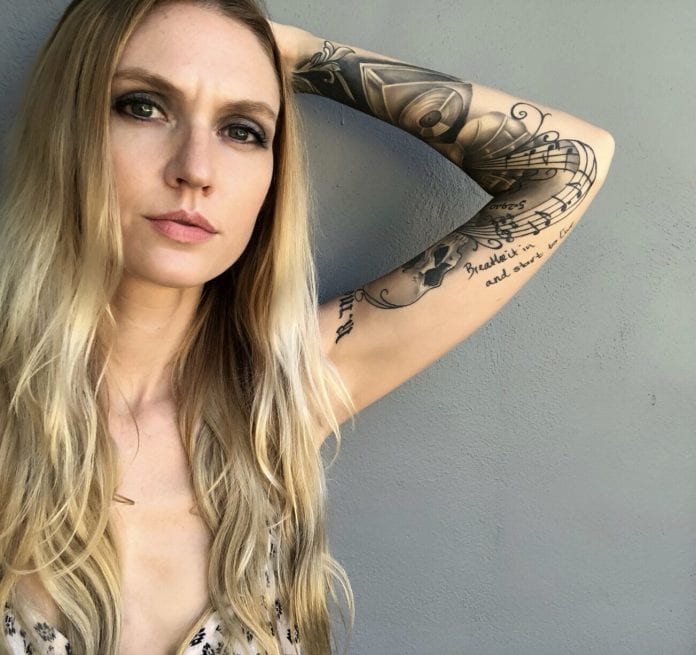 Megan Morrison who goes by the moniker, Morrison, is a multi-talented singer-songwriter, actress, multi-instrumentalist, model, and also fire performer.  The Miami New Times back in March of 2018 named Morrison one of the “Five Miami Women Artists to Watch on International Women’s Day.” She’s appeared on stage with Jessie J. and as a fire dancer in music videos for Pitbull.

She recently released her single, “Warrior Woman” with sound engineer and multi-instrumentalist, MIICHII, which is featured on a compilation album on the house music label, Pipe & Pochet.

Named last year by Miami News Times as one of “Five Miami Women Artists to Watch on International Women’s Day” must have been a great honor.

It certainly was! I want to inspire everyone with my music, but especially women. Something that took me a long time to learn is that I should celebrate who I am and not try to conform to society’s standards. I am here, this is me, and I am unapologetic for living my truth. As women, we need to celebrate our differences and lift each other up instead of judging one another.

You’re still writing and recording empowering songs for women with the release of “Warrior Woman” last month in honor of Woman’s Month. Was there any one incident that inspired this song or just the overall message of female empowerment?

I was inspired to write “Warrior Woman” when my cousin and her daughter suffered a tragic loss when a fire demolished their home. They lost everything and had to rebuild from the ground up. I dedicated this song to them. It reminded me just how strong and incredible women are. I went through my own struggle about four years ago. I was battling alcohol addiction and was starting to lose. I decided to turn my life around and have been sober ever since. I basically had to start my life over and rebuild my whole spiritual practice. It took a lot of courage and that’s why I speak so openly about it. I feel empowered because I was able to completely turn my life around when things were not looking good. It was the hardest thing I’ve ever done, but it has made me who I am today. I am happier, stronger, and wiser because of it. I want to spread this message of hope and strength to women all around the globe because we all struggle with something. We are strong, we are women, and together we can build a better world.

Tell us about the recording process for “Warrior Women” and working with sound engineer and multi-instrumentalist, MIICHII, on this project.

The lyrics and melody came to me for “Warrior Woman” right after the tragic fire. I heard a haunting but hopeful and uplifting melody. Middle Eastern music has always enchanted me. There is something so powerful and mysterious about it, I knew I wanted to have that sound. I didn’t want it to just be one genre though. I wanted the song to embrace women from around the world. In my head, I heard different powerful female voices from all over, not just mine. So I started researching different sounds. This is when I brought in MIICHII to help me mold the track. With his production skills, we were able to bring the song to life. I sang the melody and we took different voices ranging from a Baltic Women’s choir to an African yodeler. I wanted to embrace as many parts of the world as I could in one song while still making it sound uniform. I’m so happy with how it came out! I am blessed to call the talented MIICHII a good friend. It was so amazing to get to work with him on this project!

How did you get involved in music?

I started singing when I was very young. I think I sang my first solo when I was four. (It was “Take Me Out to the Ball Game”.) I’ve come a long way since then. Music runs in the family on my mom’s side. She is a musician and her father was a self-taught multi-instrumentalist who went on to compose and conduct. I guess I just have it in my blood. When I got older, I knew I wanted to do music for the rest of my life. I started singing in choirs and competitions. I later went on to study classical vocal performance in college. It wasn’t until after college that I decided I wanted to write and sing my own songs. I had always written music, but I was never really sure what to do with it. Now I am finally making a name for myself and there is no better feeling than being able to share my music with the world.

What instruments do you play and why did you choose those instruments?

I have an old Lowrey upright piano that I write most of my songs on. My mom bought it for me for one hundred dollars at an estate sale. It still plays great! When I play live, I use a Roland keytar that was a gift from my husband. I love it! For guitars, I play an acoustic small body Loar. It sounds amazing and is so comfortable. I also play a metallic silver Fender Stratocaster. I love that guitar because it sounds amazing and just looks badass. I was fortunate enough to learn how to play the guitar on a vintage, 1967 Brazilian Rosewood Martin that was loaned to me by a dear friend. That was an amazing guitar.

Music is the place I go to no matter what emotion I am feeling. It lets me express all my emotions in a beautiful way. When I am performing or just singing on my own, my head completely clears and I am just there in the moment. Music takes me to a different place. It’s a spiritual experience for me.

I just released my new single “9 Lives” on March 29th (which was my birthday)! The song is about how I lived with a lot of fear and discomfort for most of my life. I always felt like I was an outsider, standing alone in a crowded room. Now that I’ve overcome that feeling, I have a new freedom, and I’m able to look back on my life and appreciate it for everything that it was and is now. The accompanying music video will be released at the end of this month. This video truly reflects me as an artist. I’m really excited to share it!

I start recording my first solo EP this month and will be working on that for a few months. Then it’s time to go on tour!