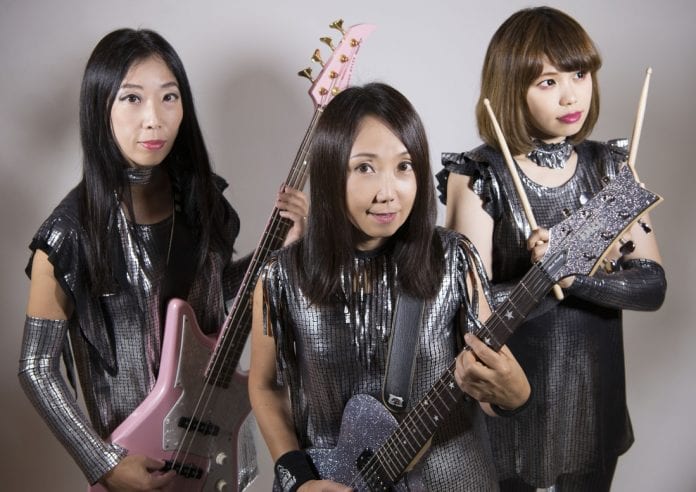 Guitar Girl Magazine recently had the chance to catch up with Japanese pop-punk girl group Shonen Knife on their “2017 USA Ramen Adventure Tour.” Although the line-up has changed throughout the years, founder singer/guitarist Naoko Yamano has been playing as Shonen Knife since 1981.

They originally formed in Osaka, Japan with Naoko’s sister Atsuko playing the drums, singing backing vocals and designing their colourful costumes, and Michie Nakatani on keyboard and bass. This lineup continued until 1999 when Michie left the band. Now the lineup consists of original members Naoko on vocals and guitar and Atsuko (who recently returned to the band after a few years hiatus) on bass and vocals, as well as the newest member, Risa Kawano, on drums and vocals.

The name came from an old brand name of a pencil knife. Shonen means boy in Japanese. Naoko described liking the fact that boy means cute and knife means dangerous, which describes their music perfectly. They have been credited with paving the way for many other lesser known Japanese acts to tour internationally and were the first all-female punk band to come from Osaka and possibly one of the most influential bands internationally to come from Japan.

In 1985, K Records released Burning Farm in the U.S., but they really started to get noticed by the American underground rock scene when one of their tracks, “A Day at the Factory,” appeared on a Sub Pop 100 compilation. The album was released on November 1, 1986 by the independent record label Sub Pop. Their most recent album titled Adventure was released in late 2015.

The band has an unusually optimistic and sugary sweet approach to punk with their catchy melodies and songs about food such as “Wasabi,” although they are influenced by bands such as The Ramones, Black Sabbath and ‘70s hard rock. They have also performed as a Ramones tribute band under the name The Osaka Ramones.

Despite their pop-oriented nature, they are still punk with their D.I.Y ethics and a distinctly underground garage rock sound. Though still virtually unknown in popular commercial music, they are legendary in underground culture.

They have toured with Nirvana, Sonic Youth, and The Breeders; played festivals such as Lollapalooza, Reading, Roskilde and Fuji Rock; recorded sessions for legendary BBC DJ John Peel; appeared on MTV’s Beavis and Butt-Head; along with penning a song for The Powerpuff Girls.

Nirvana offered Shonen Knife a support slot on their 1991 tour just ahead of their Nevermind Album. Kurt was a huge fan of the band and was quoted as saying “When I finally got to see them live, I was transformed into a hysterical nine-year-old girl at a Beatles concert.” Nirvana wasn’t the only grunge band to be fans of the band, a tribute album to Shonen Knife was made in 1989 entitled Every Band Has a Shonen Knife Who Loves Them featuring grunge legends such as Sonic Youth, Red Kross, L7 and Lunachicks.

I met up with Naoko backstage before their show at The Earl in Atlanta in May and asked a few quick questions.

How do you like touring in America compared with Japan and Europe or Australia? What do you like most about each?

The audience in America is very cheerful and friendly. I love that. Hotel rooms and beds are bigger than Japan and Europe and most of all hotels we stay in have fridges and microwaves. It’s an advantage of America. For Japan, we can have cheap and delicious good food everywhere. There are many convenience stores. It’s helpful. For Europe, bread and cheese tastes good and the towns are very beautiful. I like to see and walk around when we are touring. Australia is beautiful place and hotels are nice, too. Our audiences are friendly, too.

You look incredible! Do you have some beauty tips on what keeps you looking so great touring on the road?

Our audience makes me happy. I think that’s why.

What’s the inspiration behind your style of fashion and music?

For our stage costumes, our bassist, aka my younger sister Atsuko, made them by herself. She is inspired by ‘60s and ’70s fashion like Pierre Cardin or Givenchy. For music, I’m inspired by ’70s Rock and Hard Rock so far, but I like to listen to various kinds of music. I like R&B, Funk, Death Metal, Hip Hop and Classical music, too.

Do you have a particular process when it comes to writing songs?

I keep writing down keywords for topics of my lyrics in my notebook. When I write lyrics, I expand the keywords and make rough lyrics. Then put melodies on it. After that, I adjust the lyrics along melody lines. Writing lyrics is very hard for me. Making melodies is rather easy.

I use DaisyRock’s Rock Candy guitar in the U.S. My amp head is Taurus Stomp-Head 4 silver line. My effect pedals are Sobbat Drive Breaker, Little Big Muff, BOSS Blues Driver and BOSS Chromatic Tuner. I made an effect pedal board by myself, too.

What was it like to tour with Nirvana at the peak of their success? Any stories from the road you can remember?

There are too many stories and I can’t have time to tell everything, but we went to eat dinner together and they were great people. Kurt wanted to cover my song Twist Barbie and I told him the guitar chords. He learns so quickly.

If you could give advice to yourself when you started out playing, what would it be?