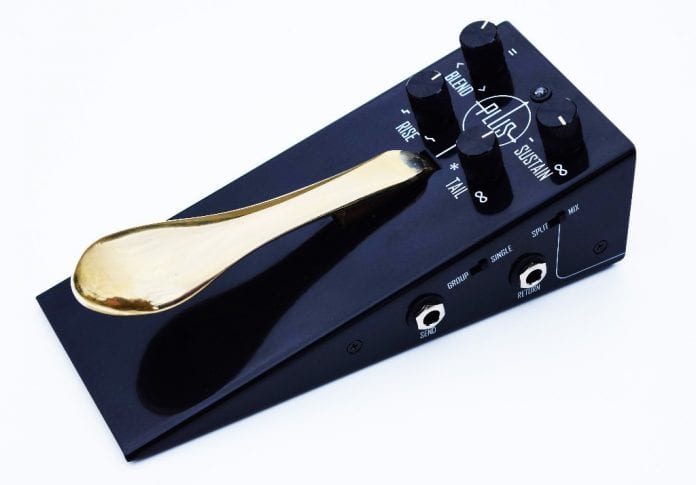 PLUS Pedal is an exciting new effects unit that offers piano-style sustain and sostenuto functions for all types of melodic instruments, including woodwind, brass, string and bowed instruments, and, of course, guitars and bass.  The concept for PLUS Pedal was introduced at the 2017 Winter NAMM Show by GAMECHANGER AUDIO and, with its potent mix of innovation, bold design, and real playability, it instantly won the hearts of many journalists, artists and countless online supporters.

What is the PLUS Pedal?

The PLUS pedal is a new kind of audio processing engine that offers piano-style sustain for electric guitars and all other melodic instruments. This is more than just a stompbox – it is a vast extension of your instrument that bridges the gap between rhythm and lead playing and lets players explore totally new territories.
Create “impossible” arrangements by playing lead lines on top of sustained chords, combine up to 5 different sounds to build deep multi-layered drones or use the WET only mode to give your instrument a totally new character.

The PLUS Pedal is available on pre order on www.pluspedal.com with a special early bird offer. The production will start in March 2017 and expected shipping date is June 2017.

The PLUS Pedal does not generate sounds with oscillators and filters! Instead – think of it as a sort of “Smart Looper” that only catches the second half of each note or chord you play and samples that short snippet of sound into a seamless, continuous loop.

This patent pending technology called “Real Time Audio Sampling” ensures that each sustained note or chord will retain the exact character of your instrument and your playing style.
This method is also fully responsive to any playing style – create continuous layers of sustain incorporating vibrato, bends, harmonics, trills and other dynamic playing techniques. You can also use the whammy bar, play with a slide or experiment with amp feedback or noises – the PLUS Pedal will capture all of these tonal nuances and turn them into a continuous sound.

The PLUS Pedal can also be used with all other acoustic instruments, such as brass or woodwinds, or even vocals. Use a standard microphone to produce amazing polyphony in real-time and create multiple voices like never before.

-Multiple layers allow stacking up to 5 notes or chords simultaneously.

-Unique design – a brilliant combination of a guitar stomp-box and piano’s damper pedal. The steel case will make sure it lasts, and the classy look will make it fit on any stage, from café guitarist to rock band to jazz trio.

-Two Outputs will allow you to use the PLUS with a two amplifier setup or split your effects chain.

-Revolutionary FX Loop allows you to link the PLUS Pedal with any other effects unit and use it to modify the Wet or the Dry signal separately.

What is it for?

The PLUS Pedal is an extension of your instrument, allowing to create multiple layers on the go. From jazz-voiceleading to heavy post-rock drones – the Plus Pedal allows the guitarist to do more with the instrument! A useful tool in any context – live performances, songwriting & arrangement, creating drones, ambient soundscapes, cinematic sound effects, and much more.
It is also a fantastic tool for aural training and practicing improvisation. Instead of thinking about which scale shape fits over what changes – the PLUS Pedal focuses all of your attention on listening to the tonal relationships between the chord and the notes you play on top.

How is it different?

-The PLUS Pedal is not a looper, nor a delay or a reverb pedal – it is a whole new type of effect based on real time sampling and looping.

-unlike synth-based units – the PLUS does not produce an annoying digital-sounding tone. The PLUS Pedal’s Wet signal is built from short samples of your instrument’s output, thus preserving the character of each note you play.

-it is not just for guitars – The PLUS Pedal can be used with any melodic instrument, including saxophones, horns, trombones, violins, cellos and many more.

– The PLUS Pedal features two outputs and a separate FX Loop which lets you create very interesting combinations of pedals.

The core team consists of three engineers/guitarists and the PLUS Pedal started out as a post-graduate experiment on sound synthesis. We instantly realized this idea’s massive potential for live instruments, and began working on the first prototypes in early 2015. Today, almost two years later – with two new team-members, three full redesigns and thousands of work-hours under our belts – we are proud to announce the PLUS Pedal’s debut at Winter NAMM 2017, with the first production batch already under way.

Playing and gigging with the PLUS pedal throughout development has completely changed our perception of the guitar and music-making in general. The PLUS Pedal truly lets you do more with your instrument, and judging by the smiling, excited faces of numerous local musicians that have helped us test the final product – I think we may have created one of the most exciting effects units of our generation!

ILYA KRUMINS, creator of the PLUS Pedal