Growing up in Philadelphia, Judy Paster was inspired by the folk music she heard her older siblings playing in the house —Crosby, Stills, Nash & Young and Carole King’s Tapestry. She began writing songs when she was 8 years old. Dealing with a traumatic youth and later with the death of her father from Alzheimer’s, Paster pours her heart and soul into her music. Paster says, “I like to dream and be creative,” and like many artists, she moved to Nashville to follow those dreams.

Like Stardust was released this summer with producer Bill McDermott of Omni Sound Studios and contains eight songs with a perfect blend of folk and classic country, including a cover of Dylan’s “Blowin’ In The Wind.” When asked about her new music, Paster shared with us, “’Like Stardust’ is one of the tracks on the album, and I decided that’s what I wanted to name the album. I’m a very stardusty kind of person. In other words, I’m earthy, I’m grounded, but my head’s kind of in the star sometimes. I like to dream and be creative, and I just felt like that song was the most exemplary of my artistry and my personality.”

Paster was busy AMERICANAFEST, where she was participating on a panel with several attorneys discussing copyright law from a musician’s perspective. Still, she took the time to chat with us on her new music and what she likes about Taylor Guitars. 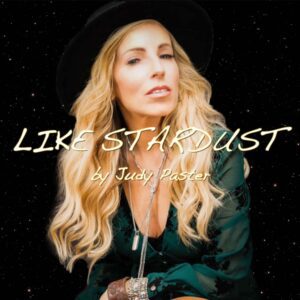 There are eight songs on Like Stardust, and you chose to cover one of Bob Dylan’s songs, “Blowing in the Wind.” Why that song?

About a year ago, a friend of mine from Rhode Island that’s been tracking with me and following my music for quite some time said he would like to hear me cover that song. The same day I posted a live video playing the song on Instagram, this country artist commented and said, “This is great. You are like a country Mary Travers.” I’m embarrassed to say that I had no idea who Mary Travers was, so I looked her up, and she’s Mary of Peter, Paul, and Mary, and they covered that song in 1963. I was like, “This is weird.” So I studied the lyrics. It’s an anthem for generations, and I thought that was also very who I am. I like to speak out for the people, all generations. So that’s why I did it.

Is there a theme for this album?

My husband says it should just be called Judy’s Love Songs because they’re all love songs on some level. I would say that ‘Like Stardust’ kind of covers everything. I’m just a blend of the earth and the universe. I think each song, whether it’s a love song or whether it’s about fulfilling your dreams, following your dreams, they all kind of go together when you listen to the project. There is a sad song on there.

‘With a Kiss’ is a pretty sad song. It’s the story of my parents because when my dad lost his memory, he would pucker up for a kiss from my mom — he never forgot the kiss. He died a few years ago, and I did not want to write the song at first. When I was ready, I got with a good friend of mine, the cowriter, and we crafted and wrote the song. It’s a beautiful song.

I’m definitely classic though, no matter where I go, I seem to tend towards classic sounds, which I think that speaks to the Dylan cover. That song is 50 plus years old.