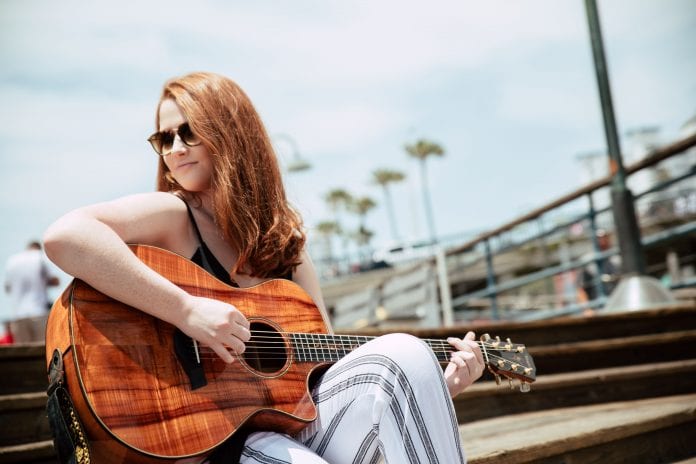 My name is Liddy Clark, and I’m a singer-songwriter whose country roots intertwine with a breezy West Coast chill vibe. I’m attending the University of Southern California, studying in the Thornton School of Music and interning at The Recording Academy (GRAMMYs). Currently, I am recording an entire album of new music (I wrote over the past couple of years) at Dubway West Studios in Los Angeles, and I can’t wait to share more this year! 😊

Tell us about your new music and the filming of your recent video for “Hit and Run.”

It was so much fun filming that video! Overall, just a really chill vibe on the set with such professional, talented people. We shot it just outside of Nashville in one day. And I’ve been recording an entire album of new music in LA, and I can’t wait to share more details later this year.

We can tell you take your songwriting very seriously. In your bio, it states that you aim to keep on deepening your connection with your listeners. Can you share with us your approach to songwriting?

Sure! Songwriting is what keeps me grounded and connected with people, and so when I approach a new song or concept, I try and write as truthfully and honestly as possible. I’ve learned that those songs tend to connect better with people as opposed to the songs that write what you think people want to hear.

I usually play acoustic-electric with a Taylor Guitar. I have played a Taylor Guitar for years. I am actually a partner with them. My first guitar was their Spruce 814ce, but my favorite is the Koa K28ce, which is the one I primarily play with.  I later added to my collection the Mahogany 524ce (it has a nice tone) and a 12 String Rosewood 756ce. I actually just started learning electric guitar! I got a Gibson Les Paul for Christmas, and I’m excited to start learning more about amps and pedals.

You’ve covered Lee Ann Womack’s “I Hope You Dance” and did an excellent job! Why that song?

Thank you! My dad’s cousins (Drew and Tim Womack, no relation to Lee Ann) were actually featured on the original version of that song (they were part of a band called Sons of the Desert) doing background vocals, and I’ve always really loved that song. It was really cool to have Drew featured on the track with me doing background vocals, as well as bring my own touch to the song.  Ironically, this past summer, while interning at a publisher in Nashville, I met the songwriter of this song, Tia Sillers (she works with the same publisher), and we got to spend some time together. She is super nice and talented, and I taught her how to work her IG. She told the story of how she wrote the song, and it’s very inspirational. I recorded and released the song before I met her.  She’s a redhead like me!

As a young singer-songwriter beginning her career, who would you like to collaborate with?

Oh, man, so many people. I’d love to collaborate with Ed Sheeran and Julia Michaels someday. I love both of their songwriting styles so much, and their songs always resonate with me.