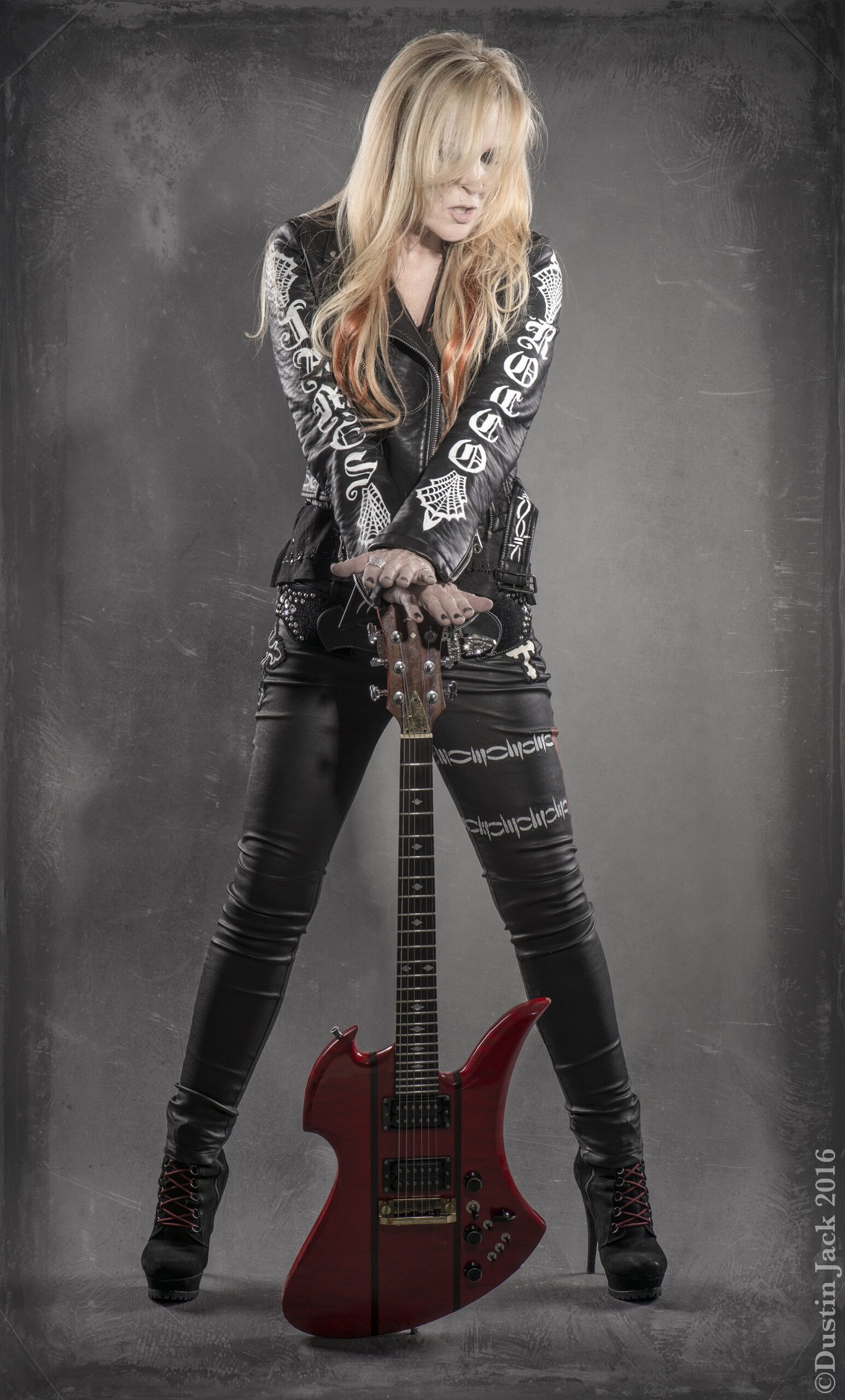 From lead guitarist of the all-girl teenage rock band The Runaways produced by Kim Fowley in the mid ‘70s to today’s solo artist, this iconic singer, songwriter and guitarist helped pave a way for female musicians in the rock and metal scene. At the age of 11, Lita Ford received her first guitar and never looked back. Inspired by guitarists Ritchie Blackmore, Johnny Winter and Jimi Hendrix, it wasn’t until attending a show featuring the all-female band Fanny in the early ‘70s that Ford began to develop her approach to playing the guitar which she described in a recent interview is to “focus on your guitar playing first, the rest will be rewarded to you.”

Rewarded she has been in her career since those early days with The Runaways. After the breakup of The Runaways in 1979, Ford pursued a career as a solo artist until 1995 pumping out albums Out for Blood (1983) and Dancin’ on the Edge (1984) with Mercury Records (the title track of which garnered her a Grammy nomination in 1985 for Best Female Rock Vocal Performance), Lita (1988), Stiletto (1990), Dangerous Curves (1991) on RCA Records, and following up with Black (1995) with ZYX Records. Some of her most popular singles during that time were “Kiss Me Deadly” (which was nominated for an MTV Music Award for Best Female Video), her duet with Ozzy Osbourne “Close My Eyes Forever,” and “Shot of Poison” which also was nominated for a Grammy in 1995 for Best Female Rock Vocal Performance.

It was time to take a hiatus from music and focus on raising her two children, so Ford devoted the next ten years doing just that. Her comeback in 2008 featured Ford performing at many hard rock festivals, then continuing in 2009 with touring and performing across the US and internationally with American heavy metal band Queensrÿche. 2009 also brought the release of Wicked Wonderland. Since that time, Lita has collaborated with many artists, toured with Def Leppard in 2012, released another album Living Like a Runaway (2012), and has appeared on television shows VH1’s Rock ‘n Roll Fantasy Camp, That Metal Show, Nickelodeon, Big Time Rush and even showed her cooking skills on The Food Networks show Chopped. Ford also reconnected with former band mate Cherie Currie in 2013 releasing a Christmas single “Rock This Christmas Down.” Ford also earned Guitar Player’s Certified Legend Award in 2014.

Ford has had a busy 2016 so far with the release of a new album Time Capsule, touring with her band mates Patrick Kennison, bassist Marty O’Brien, and drummer Bobby Rock alongside Dorothy and Halestorm, was featured on Ace Frehley’s new album Origins Vol. 1 on a cover of The Troggs’ “Wild Thing” – and published her highly anticipated autobiography, Living Like a Runaway.

There’s no slowing down for Lita Ford as she continues to perform and work on new music. According to Ford, “It’s just in my blood. It’s addicting. It’s like a drug. Once you have it, you just want more. It just doesn’t go away.” Her advice?  “Follow your dreams. Don’t let people direct you in any other direction besides what you feel. There will always be the idiot that try to block you.”

Lita Ford will be a 2017 She Rocks Award recipient at the National Association of Music Merchants in Anaheim, California during the annual She Rocks Awards show put on by the Women’s International Music Network (the WiMN).  WiMN is the mastermind of founder Laura B. Whitmore and “unites women who work within all facets of the music and audio industries.” The She Rocks Awards is held annually and pays tribute to women who display leadership and stand out within the music industry.

Ms. Whitmore’s comments on Lita Ford: “Whether as a solo artist, band member, or guitar shredder, Lita Ford is a true pioneer who has broken down barriers and inspires today’s female guitarists. I am excited to honor her with an award that really sums up the essence of Lita Ford: She Rocks!”

Ford took some time from her busy schedule to answer a few of our questions. Read on!

GGM:  Busy year so far…new book, new music release, lots of touring!  How do you keep up with such a grueling schedule and what inspires you to continue making music?

Lita:  It’s just in my blood. It’s addicting. It’s like a drug. Once you have it, you just want more. It just doesn’t go away. It even works its way into raising my kids.

GGM:  Well, let’s talk about some of your new projects.  You already spent some time earlier this year with Lzzy Hale and Halestorm and soon you’ll be heading back out on the road with them — plus your own band has been touring!  How fun was it touring with Lzzy and what can fans expect from your shows?

GGM:  What’s your gear line-up for the tour?

Lita:  Nick Bowcott over at Marshall introduced me to the DSL100.  I absolutely love it.  It’s loud, ferocious, and scary. And it gets better when you turn it up. I also use a bunch of JCM800’s that were made in the early ‘80s that kick ass. For guitars, I stick with the original BC Rich guitars made by Bernie Sr. and his team to keep my sound. Nobody made guitars like them.

As far as live effect goes, first is a volume only used to silence the hiss or switching guitars – it kills the crap. Of course, I use it in solos and the end of “Close My Eye” for the fade. I have a Taurus delay. They are relatively new. They made me a Lita model. A Jerry Cantrell Wah!  I’ve always loved the Crybaby, but the Cantrell has a bigger swoop. Just the basics.

GGM:  Also, new this year is your memoir Living Like a Runaway. What was it that compelled you to tell your story, how did you approach the project, and what was it like to recall all those memories – the good and the bad?

Lita:  I just felt my story was a little bit different than the guys. There were a lot of hurdles that I had to jump. A lot of bullsh*t to deal with. I felt like I needed to put out my story so others can read it and digest the wackiness of being in this industry. I’d like to make a motion film. Maybe about the things that are not in the book.

GGM:  In your memoir, you talked about your first acoustic guitar that your mother bought for you.  What was it that drew you to the guitar in the beginning and who were your influences at the time?

Lita:  God!  Honestly, it was not one thing that made it happen. It was just something I wanted. I had to have a guitar. My mother went to Sears and bought me the guitar. I was 11 and she really wanted to see what I would do with it. My family was not musical in the sense of musicians, but they listened to lots of music. Everything from Italian operas to Elvis. They were the best.

GGM:  Time Capsule, your most recent release, is a compilation of some previously unreleased recordings. Tell us about the inspiration behind this album.

Lita:  It was a set of analog tapes in my closet that I felt fans needed to hear. They featured a lot of celebrities that had performed on the songs and just the songs themselves. It just brought us back to the 80’s. A time that a lot of us miss. This is a little piece of history – hence Time Capsule.

GGM:  And your current band line-up?  Do you have any new music that you’re working on (in between touring, of course!)?

Lita:  The band is like rolling thunder with Patrick Kennison on guitar, Bobby Rock on drums, and Marty O’Brien on bass. We melt faces and go through the Lita catalog and way back to the Runaway days. It’s ferocious.

GGM:  Is there anyone that you haven’t collaborated with yet that you would like to?

Lita:  Mick Jagger and Steven Tyler. Of course, I would play guitar and let them do the singing.

GGM:  You’ve been such an inspiration for women in rock and today we’re seeing so many organizations created to help empower and promote women in music.  Do you feel we’re seeing more opportunities for women within the music industry today?

Lita:  Without a doubt. The She Rock Awards is a good example. So many doors are opening. Now I want to get rid of the need to use she or female to define a category. But it is also great to see that we’ve now been given this platform. It’s just bizarre to me that we never had that platform before. This is rock ‘n’ roll. It doesn’t take testosterone males to play rock and roll. That’s what amplifiers are for.

GGM:  It must be an incredible experience to have been such an important piece of history with The Runaways — that was the beginning, but now you have come so far and have experienced so much, how has your perspective changed?  And with all those experiences, what’s your message to young girls that want to pursue a career in music?

Lita:  I would tell them to just follow their heart. Follow your dreams. Don’t let people direct you in any other direction besides what you feel. There will always be the idiot that try to block you. That just means that whatever you’re doing, you’re doing it right. Keep doing it.

GGM:  So much has changed over the years with the rise of social media which allows for some pretty cruel and downright vicious comments from the internet trolls. How do you deal with any criticism and what advice would you have for newcomers in the industry?

Lita:  That’s what the delete button is for. Don’t take it to heart. These people are brave when they are behind their computers. They would react differently if they were in front of you. They’re always gonna look for something. But I think my fans are awesome. I got a great group people around me.

GGM:  You’ve had a long and lively career and have been fortunate to have worked with some of the greatest rock legends in history. What’s one of the biggest decisions you made in your life that had the greatest impact on your success?

Lita:  Joining the Runaways. Kim Fowley had a vision of an all teenage young girl band which at the time, there had never been an underage all girl band. We were the first. That was the beginning of my rock and roll life.

For more on Lita Ford, visit her website HERE.