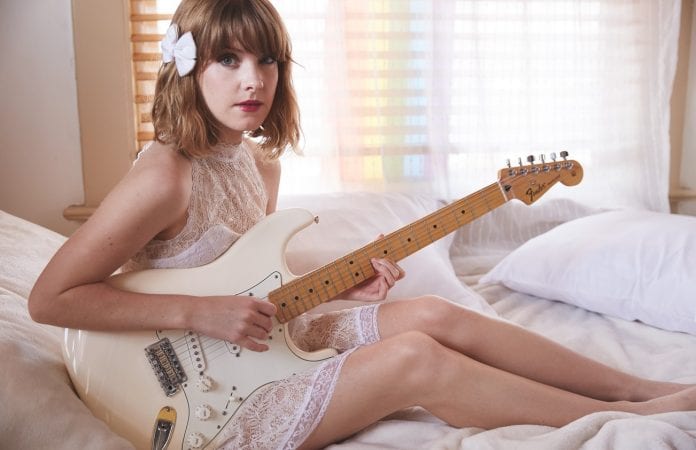 Lucy LaForge is a Los Angeles based singer, songwriter and activist and heads the American folk pop band Lucy & La Mer.  With her signature baritone uke and delicate, breathy vocals, along with the bands’ stunning string instrumentation, they have developed a catchy indie pop sound.

Their latest single “Honey, Put Your Weapons Down” was produced by Grammy Award-winning Jared Lee Gosselin (India Arie, Eminem, Corinne Bailey Rae).  “The central theme for the single is transitioning, most of my songwriting happens when there’s a change occurring in my life” reveals Lucy.

In the press release announcing the single, Lucy described how the single was created through experimentation and the breaking down of boundaries. Lucy & La Mer aims to be a constant reminder for audiences to learn self-love, to take a break from something that is wearing you down emotionally and to focus on what’s most important. Her music beautifully blends acoustic sounds with a modern indie pop approach.

I love your sound and the blending of your instruments.  Tell us about Lucy & La Mer and how the band formed?

I started Lucy & La Mer as a solo project. Just me with a guitar (my dad’s 1956 Gibson LG2 – still my favorite). School was finally over and I wasn’t sure exactly where I wanted to go or what I wanted to be. I stayed at a friend’s in LA and met a few jazz musicians who wanted to jam. They added a lot of character to the songs and created a really positive energy during live performances. We still change out musicians all the time and love having special guests sit in at shows.

The song is about seeing the bigger picture and deciding what you want out of your relationships. There was a lot of arguing going on for me in the last year – both on a personal level in a romantic relationship as well as in the larger realm of our political climate in the US. This track is about knowing when to walk away from something and knowing when to fight for it.

This new single is produced by Grammy Award-winning producer Jared Lee Gosselin (India Arie, Eminem, Corrine Bailey Rae). How was it working with him?

This was actually my first time working with a producer in a “real” studio. My debut EP was actually recorded in a house, very sporadically, over the course of a year. The Fab Factory studio was incredible and they work so fast. Jared and I have different musical backgrounds, which really added to the collaboration. We took what I know (acoustic live recordings of folk instruments) and blended it with his modern pop style.

When approaching songwriting, do you collaborate with the band, or is it something you create on your own first and then take to the band to write the music?

I write by myself, usually on a guitar or baritone ukulele. I bring it to the band and they each add their own interpretation to the song. We’ve been talking about doing co-writes for the next record though and I’m excited to see what we create.

I’ve seen videos of you performing on a ukulele. Can you give us a rundown of your ukes and any other instruments you play?

The ukulele is a surprisingly diverse instrument. There are so many different types of ukes and different styles of playing. I love the tone of baritone ukuleles, very warm and unique. I’ve always played piano and guitar, but I’ve recently added banjo, mandolin, autoharp, and harmonica to my studio collection. I thought it would be interesting to experiment with new sounds and see what new song ideas come from it.

How did you first become involved in music and who were your early musical influences?

I grew up in a musical family, so summer vacations and holidays were always filled with singing and an assortment of instruments. I was a very timid kid, so I admired the way my dad could pick up a guitar in a room of full of relatives and get everyone singing and swaying together. My parents listened to a lot of John Prine, Beach Boys, Three Dog Night, and Led Zeppelin; my brothers and I were obsessed with Green Day, Blink 182 and everything Ska.

When was it that you decided that you wanted to pursue music as a career?

I’d been planning to pursue a career as a therapist, specifically in art/music therapy, but the idea of leaving 9+ years of school with 100k in debt sounded terrible. The education system is so messed up. And I didn’t think I’d be very good at helping people if I was worried about finances and exams. But playing live music is always rewarding and fulfilling. Even through the lows (and there are always lows) I don’t think I could do anything else. It’s a challenge for sure, but it makes a lot of sense to me.

What musicians had the most impact on developing your style of music?

My dad, definitely. I still play the same finger-picking patterns on guitar that he taught me. My grandparents encouraged me to listen to Sinatra and Judy Garland and Gene Kelly, so I really value lyrics and the delivery of specific words as well as the overall story arch in a song.

Do you have any plans for a follow-up single or album?

We’re taking a few new tracks to the studio this summer!