Home Interviews Maddie Poppe:  It’s been a “Whirlwind” of a year

As seen in It’s no wonder why the supremely talented Maddie Poppe was declared the winner of Season 16 of American Idol: her radiant voice, straightforward storytelling, and heart-on-sleeve presence was sure to captivate audiences around the country. Before achieving stardom, the Iowa native got her start at a young age singing classic hits with her dad’s band. Within a year of picking up the guitar, she began performing locally and making a name for herself. By the time she started high school, she was fully immersed in songwriting and drew inspiration from such artists as Sara Bareilles and Ingrid Michaelson.

Her first album, titled Songs from the Basement, was written and recorded with her father in 2016 – one year before dominating the American Idol stage. In her new instantly charming album Whirlwind, the multi-instrumentalist who plays guitar, piano, and ukulele chronicles her amazing journey through unforgettable melodies and cultivated songcraft. She pours her emotions into lyrical ideas that are then neatly wrapped in elements of Americana, indie-rock, and pop. With a fearless passion and a skilled team of producers at her side, it is safe to say we’ve only seen the beginning of Maddie Poppe.

How did your musical journey begin?

Growing up, music was always in the family. My dad was in country and bluegrass bands and would occasionally ask me to come up and sing with him and his band. When I first got a guitar in third grade, I found it super complex and frustrating and put it down after a few days. It wasn’t until I was 14 that I once again found an interest in playing guitar. I only wanted to learn one song but ended up learning about 100. I slowly started playing my own shows locally and haven’t put down the guitar since.

Who were some of your earliest influences?

Some of my earliest influences that I can remember were Anna Nalick and Kelly Clarkson. I remember having their CDs on repeat in my portable CD player during any car ride when I was younger.

In what ways do you think you have grown from your time on American Idol?

I think I have experimented with many more sounds, some of which I was really scared to try at first. I think sometimes the things we are most afraid of or nervous to try are the things that end up being the best things for us.

Tell us about your new album, Whirlwind. What was the writing process like for you?

It was an absolute whirlwind, which I why I named the album that. I was in so many different rooms with countless writers, producers, and musicians almost daily, pretty much wearing my emotions on my sleeve in order to write a worthwhile and meaningful song.

Your single “Made You Miss” is a catchy power anthem dripping in blues-rock. What was your inspiration for that track?

I actually did not write too much on that song. I added a few things to the bridge, but other than that, the song was pretty well put together before I even showed up. They didn’t have anyone to cut the song prior to me, and it just happened to work out for us.

How do you think music has evolved from your first album, Songs in the Basement?

I’ve experimented and opened myself up to so many more genres and sounds that I never thought I would be interested in. It wasn’t until I was basically pushed into the discomfort of it that I started to enjoy it.

Let’s talk about gear. What are you using these days (guitars, amplifiers, accessories, etc.)?

My go-to accessories that I must have at every performance are at least two light guitar picks —one I keep on my mic stand and the other usually in my pocket if I’m not using it for that particular song. I also like to keep a capo and a tuner at the head of my guitar. My friend also recently made me a quarter-inch cable, so that’s been nice to travel with as well!

You had a chance to tour with Ingrid Michaelson recently. How was that?

It was such an honor getting to know her, but also getting to know and understand her audience. Sharing the same stage with her is something I have dreamt of for so long, so to see it come to fruition was so exciting.

Before going on stage, do you go through any warm-ups or do anything to “get in the zone”?

It’s actually kind of funny, I don’t play by too many of the standard “by-the-book” singer/musician rules. On Idol, I would often drink whole milk before performances and as much as it would frustrate my vocal coaches, I would never ever warm up.

What advice do you have for other artists like yourself that want to perform?

I would advise to simply be yourself. As simple and cliché as that may sound, I think one of the most important things to be concerned with is your happiness. 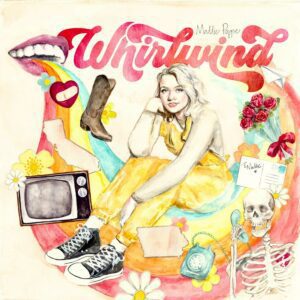 “Making the album felt like one big experiment, where I kept learning so much and getting so many new ideas,” says Poppe. “Instead of just limiting myself to any one genre, I wanted to try out whatever styles and sounds felt right for the song.

On co-writing:  “At first I was so scared to lay all my emotions out on the table like that,” she recalls. “But now that I’ve gotten used to it, I don’t have that fear anymore. These days I’d much rather write with other people because I love that feeling of everyone sharing their ideas and creating something you’d never come up with on your own.” And as she’s evolved as a songwriter, Poppe’s made a point of telling her story with soul-baring vulnerability. “Two years ago, I never would’ve imagined I’d be where I am today,” she says. “I never would’ve thought I’d get out of small-town Iowa and play shows all over the country or meet somebody so perfect for me—I never thought I could make my dreams come true like that. Making this album, I was really honest about everything that’s happened in my life during that time. I didn’t hold anything back, and I hope that people can feel how real the songs are and connect with each of them in their own individual way.”