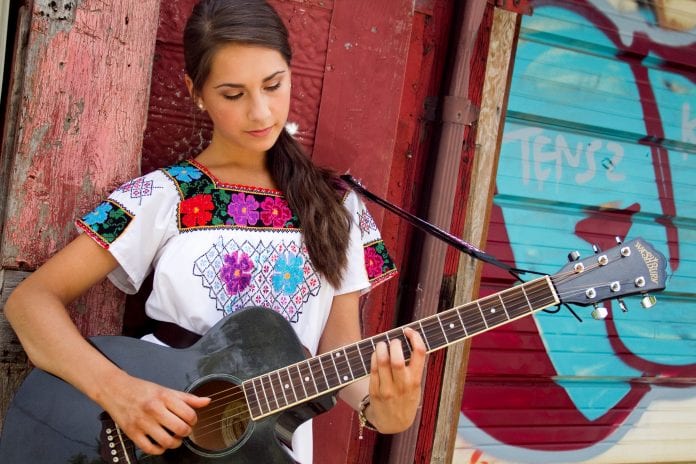 Even at the young age of 18, Maddy Rodriguez is finding her chops as a songwriter and guitarist, and has already earned recognition from the industry as a finalist in the John Lennon Songwriting Competition and the International Songwriting Competition. Her song “All the Wasted Time” from her debut album “Don’t Be a Stranger,” was judged the winner of the  International Acoustic Music Awards Competition, and the song has been garnering modest airplay on American country music radio.

In a phone interview from her apartment in the basement of her parents’ Toronto home, Rodriguez credited her interest in guitar and songwriting to a couple of Taylors: James Taylor and Taylor Swift.

“I’ve always loved singing,” she said. “Even before I was speaking full sentences I was humming tunes. My dad wasn’t in the music business or anything, but he’s a pretty smart guy and he knew that it’s important if you want to get anywhere in the music business it’s important to have your own original songs, whether you wrote them yourself or had someone write them for you. So we played with the idea of trying to get others to write for me for a while.”

Rodriguez said she got her first guitar when she was 11, a nylon-string classical gift from her parents. After a few lessons, she had pretty much mastered “Jingle Bells,” but couldn’t muster up the enthusiasm to continue, and didn’t “officially” start playing for another two years. “My dad bought me a nice Yamaha,” she said. “The story is that he said he bought it for himself and I was just borrowing it from him. I was allowed to play it, but it wasn’t technically mine. He plays a little bit recreationally, mainly Mexican songs from his youth, but he’s only picked it up once or twice in the last five years, so it’s become my baby. I think if there was a custody battle, I would win. I’ve been taking care of it and playing it every day.”

About the same time, she discovered Taylor Swift playing on television and heard an interview where she described her songwriting routines. “Until then, I didn’t think that I could write songs because I didn’t think it was possible to if you didn’t read music,” she said. “My idea of songwriting was that you had to know how to compose and I didn’t know how to do that. But when I heard about how she did it, how she’d sit down with a guitar and come up with the melody and words, I decided to sit down and do it one day. I had a bad day at school, and I just wrote a song. It wasn’t that great of a song at all. I can still remember it, but that was the first one and it got me started.

“When I started writing, it gave me the extra incentive to start playing guitar every day. It was exciting playing your own stuff that all you wanted to do was do more of it. Because I started to play more, my parents decided I should try lessons again. So I started going to a music school that was a little more organized than the one I started going to when I was 11.”

Songwriting became something of an obsession with her, and in addition to studying the contemporary country artists that she heard on the radio, she found another source of inspiration: Her parents’ record collection. “Ever since I was little, my parents always played James Taylor in the house,” she said. “So I started listening to all of those songwriters again. I started listening to James Taylor, Don McLean, Carole King, Billy Joel. I love the band Bread and the Beatles. I studied all of these different artists, just paying attention to the songwriting and just loving it. I still love it. I listen to the songwriters from the 70s as much as I listen to contemporary country artists because that’s the other style of music that I love to listen to.”

When she was 15, she went to a songwriting workshop and for the first time got some feedback and encouragement from someone other than her parents and friends. In practicing her craft, she experimented with points of view and found out that she could not only write about her own life, but tell other peoples’ stories, too. “I don’t really try to stick to one way of writing,” she said. “Some songwriters like to write just about their own lives or other people’s lives or just about love. They don’t even do it intentionally. It just happens. But for me, I like to write about anything that I think can make people feel something or makes me feel something. So sometimes it’s just about my own life, about things I go through whether its bad or good, whether I think I’m in love or if one of my friends has been dismissive or something. But I also like to write about other people’s lives.

“On my album, almost all of the songs involve my friends. Quite a few of them were written about my friends’ stories. For example, ‘All the Wasted Time,’ the one that’s been playing on the radio in the U.S., was inspired by my best friend, whose dad hasn’t been around for her growing up and that’s been very hard for her. I really like to write about anything or anybody. Anything that can be a story to touch people.”

Although Rodriguez said she tries to write every day, she tries not to pressure herself with big goals. “I’ve heard about songwriters who try to finish a song every single day and that sounds really impressive, but I feel it’s more important to write great songs than to write a thousand bad ones,” she said. “I try to write at least a new line or a chorus or whatever comes to me. I’m not going to force it, but I try to think about songwriting every single day, and if I finish a song, that’s great, but if I don’t, that’s okay, too.”

With her songwriting obsession, she said she’s already accumulated a large catalog of tunes, and even though “Don’t Be a Stranger” has only been out for a couple of months, Rodriguez said that she’s already got enough material for a second record and so has been trying to write songs that she can shop around for other artists.

“My publishing company asked me if I was interested in writing for other artists because even though I’ve written a lot, I’ve always been focused on writing for myself,” she said. “So I thought I would give it a try to write some super-duper country stuff. My songs are country, but they’re a little more pop than traditional country. I do love true country music, so now that I’m trying to write for other artists, I’ve been doing some heart-wrenching mushy stuff and it’s lots of fun. I just pretend I’m from the South. It’s great. I wish I was from the South. People from the South are so cool and I love their accents.”

And in the meantime, she continues to hone her guitar playing skills, especially to become a good finger-picker.
“I think that over the years I’ve gotten pretty good at guitar but I’m not amazing yet,” she said. “I’m still working on it. Maybe by the time I’m 40.”

For more information on Maddy Rodriguez, visit her website at www.maddyrodriguez.com.